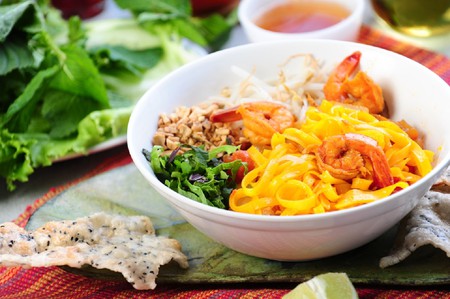 Without a doubt, the most underrated dish in Vietnam is Mì Quảng. The ridiculously disproportionate attention given to Phở borders on criminal, and we at Culture Trip have decided to put ourselves into the role of cheerleader for this wonderful bowl of happiness.

First things first—it’s pronounced ‘Me Wang.’ Yes, this is funny, but don’t let the name distract you from why this is the dish you absolutely have to try before leaving Vietnam. It’s the perfect mix of flavors and textures, and it’s made with some of the best versions of staple Vietnamese ingredients—rice cake, noodles, turmeric, peanuts and a serving of pork, shrimp or beef.

Let the server know by saying “Chigh.” (read: chay) We apologize in advance for getting you hooked on a dish that’s usually cooked with meat. Vegetarian options are around, but not at every mì quảng place.

Mì quảng comes to us from Quảng Nam Province, an agrarian region of seemingly endless farms and rural towns in central Vietnam. Here, where the mountains rise to almost three kilometers above the stunning coastline, mì quảng is revered. Locals pretty well consider it their official dish. It’s even served as part of the ceremony for both Tết—the lunar new year festival—and for their hallowed death anniversaries. 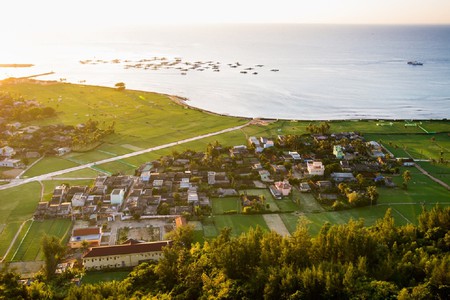 The key to mì quảng’s deliciousness is in the broth. The choice meat is simmered in either water or bone broth. For seasoning, there’s black pepper, shallot, garlic, turmeric and everyone’s favorite blend of fermented seafood juice: fish sauce. The final product has a distinct yellow color.

The noodles are wide, flat and made with rice. They’re unique to this dish, and in our not-so-humble opinion, much tastier than the thin white noodles served with pho. (Call off the angry pitchfork mob, we still think pho is tasty. Mì quảng is just better!) 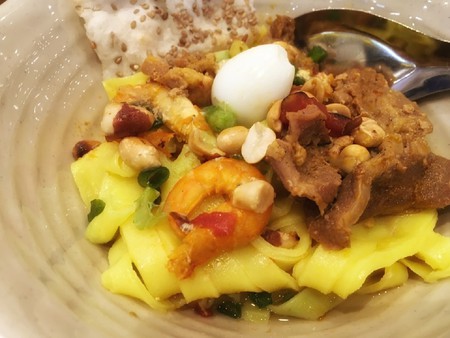 To assemble this perfect dish, place a mixture of vegetables—basil, mint, sliced banana flower, and lettuce—onto a bed of noodles. The broth is then poured in, but not a lot of it. Unlike other noodle dishes, mì quảng is served with just a bit of broth. A sprinkling of peanuts to add even more flavor to this already flavorful dish. We’re almost there now. The one last thing we need to complete this masterpiece is the toasted sesame rice cracker. The harsh crunchiness complements the slippery noodles oh so well.

It’s not the most graceful dish to eat, since you pretty well have to shovel the noodles in while jamming a piece of cracker into any gap you can find, but flavor is more important, anyways.

Trust us: DO NOT leave Vietnam without trying mì quảng.