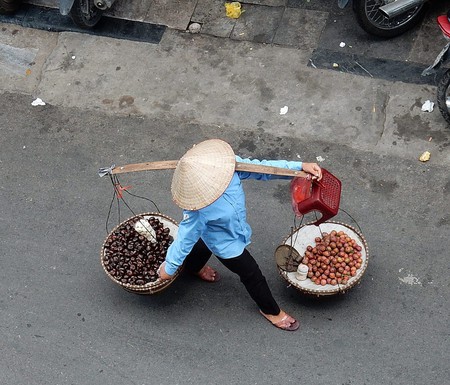 A common sight you will come across while traveling along Vietnam is that of local ladies donning the Non La (Vietnamese conical leaf hat), walking gracefully along the sidewalk. Here is the story of the Non La.

The Non La is a traditional symbol of Vietnam, which like many other traditional costumes of the country, has an origin story that comes from a legend. The legend here pertains to the history of rice-growing in Vietnam. 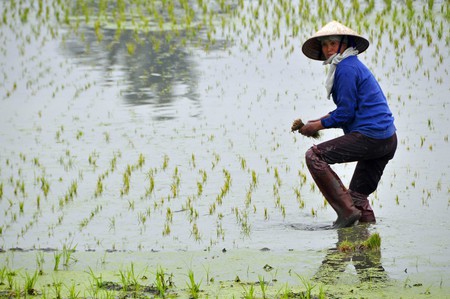 A common sight in the Vietnamese countryside | © Dennis Jarvis/Flickr

The story goes that once upon a time, during a torrential downpour of rain that lasted weeks, flooding lands and homes and causing unfavorable disturbances to the rural life, a graceful goddess descended from the sky. She was wearing on her head a giant hat made of four large leaves stitched together by bamboo sticks. This hat was so large that it guarded the people against all the rain, and she was able to dispel the clouds and rain, allowing the people to return back to a normal life. 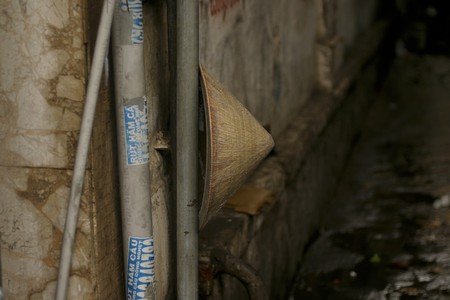 The goddess even taught the people how to grow crops among many other things, and one day during one of her educational stories, mankind fell asleep listening to her soothing voice. When they woke up, the goddess was gone.

To honor her, a temple was built, and not only that, but everyone followed suit and took her lessons to heart. People went into the forests to find leaves similar to the ones that the goddess had on her head, which they then stitched together on a bamboo frame. This then became an indispensable item, a daily essential for the farmers on the paddy fields, boat-women rowing passengers across rivers, and those traveling miles under the scorching sun. 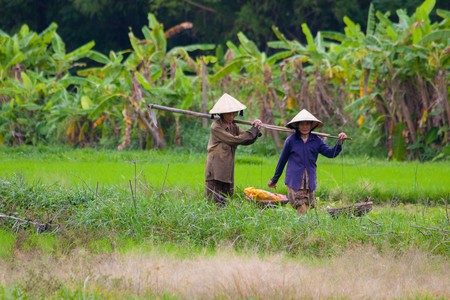 Ever since this original version that appeared thousands of years ago, the Non La has evolved greatly and now has many variations. As a rule, women don a broad-rimmed version of the hat, whereas for men, the cone is higher and the rims, smaller. Different versions were made for the upper class, for children, for the army troops, for the religious monks, for different regions even, and so on. There are over 50 types in total. The material can change too, as people utilize what is around them, however one typically uses palm leaves, bark of Moc tree and bamboo to make them.

The two best known are the Non La of Chuong Village near Hanoi and the Bai Tho hat of Hue, the old imperial capital. The Non Bai Tho, also known as the poem hat, usually has a picture of bamboo or poetic verses under the leaf layers, which can only be seen under the sun. 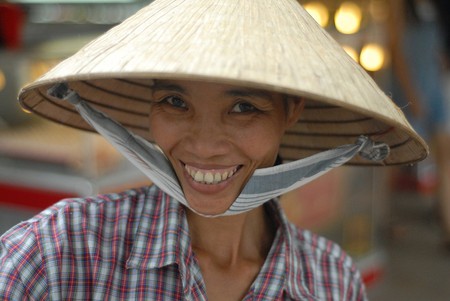 The Non La is used as protection from the sun and rain, a basket for vegetables to use when shopping at the market, or even as a bowl to relieve thirst when passing by a well. You may even come across young couples shielding their kisses form the public behind this traditional hat during their dates. It also makes for a great souvenir to take home, to show the rest of the world that this traditional symbol of Vietnam remains without age, sex, or racial distinctions.