What's Your Poison?: The Commercialisation of Snake Whiskey in Asia 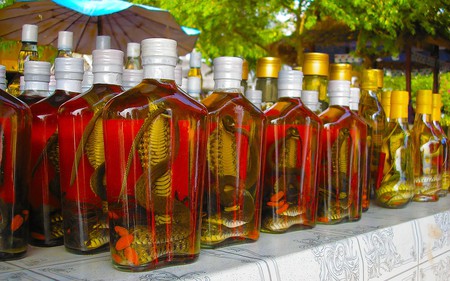 Snake whiskey has a long history in Asia, used for millennia as an aphrodisiac, among other things. Nowadays, however, it’s marketed to thrill-seeking tourists and international buyers. Here’s the story of how this traditional medicine morphed into a mass-produced drink aimed at global consumption.

Snake whiskey: The cure for whatever ails you

The origin of snake whiskey dates all the way back to the Zhou Dynasty in China, over two thousand years ago. Back then, people used it as a traditional medicine, believing the essence of the snake could relieve pain, as well as stop hair loss and boost virility. It was a cure-all – a kind of snake oil, long before travelling American salespeople swindled their customers in the 19th century. 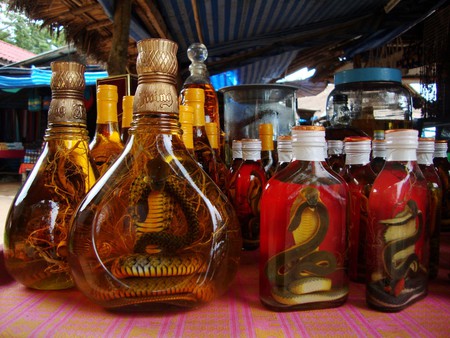 Many people still believe that snake whiskey provides an invigorating boost as an aphrodisiac. In northern Vietnam, the Hmong people use it as part of a courting ritual, where men offer it to women in a hollowed-out buffalo horn. Distillers on the island of Okinawa make their own version, called Awamori, which they also sell to mainland Japan – even importing rice from Thailand to meet the high demand. Rather than just drinking it for the supposed health benefits, though, Japanese people consider it a show of respect to offer someone snake whiskey, because of its lofty price. 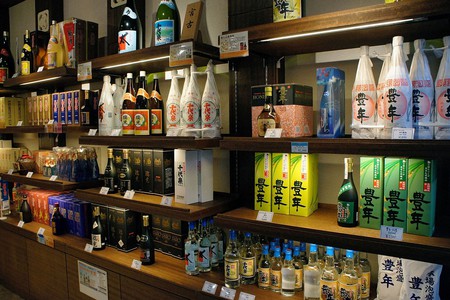 Snake whiskey has been a drink of choice in Southeast Asia for many generations. There are families who have been making this drink for as long as anyone can remember. It’s deeply entrenched in the local culture. There are even towns – such as Lệ Mật, in Vietnam – where snakes are their primary industry, and it has been that way for many years, long before cheap air travel brought a surge of international tourists.

The rise in global tourism

As more and more travellers returned home with stories of their bravery – drinking face-to-face with a deadly cobra – word spread about snake whiskey. Thrill-seeking backpackers came looking for this notorious drink, and many of them brought bottles home to shock their friends and family. There are dozens, if not hundreds, of blog posts about tourists on the hunt for snake whiskey as they travel through Thailand, Laos and Vietnam. Today, you can find snake whiskey in markets near just about every tourist hotspot – especially in places such as Luang Prabang and Hoi An. 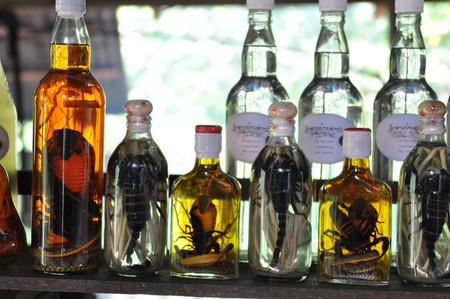 As the demand went up, so did production. Local producers also realised there were untapped overseas markets. With bloggers and travel sites providing all the necessary marketing, local producers set up online supply chains for people to have snake whiskey shipped anywhere in the world. Snake whiskey has gone industrial. Nowadays, liquor enthusiasts in just about any country can order a bottle of snake whiskey, either for their own collection, or to give as a memorable gift. This traditional drink has been commercialised.