The Best Graphic Novels About Vietnam 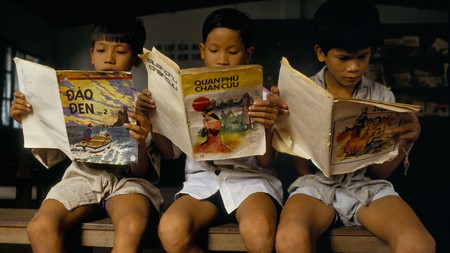 With the current restrictions on travel, chances are you’re spending a bit more time at home than usual. Comic books are the perfect way to escape from your living room. So get comfy, and let Culture Trip show you some amazing comics and graphic novels by Vietnamese and international authors that’ll give you a feel for the country and its past.

Comics are written and read all over the world, and Vietnam is no exception. In fact, a modern comic book revolution – driven by local artist cooperatives and talented people from at home and abroad – has swept the country.

Sadly, a lot of this work remains untranslated, but that’s starting to change as Vietnam’s artists and authors start winning awards and getting the international acclaim they deserve. Read on to discover the history of Vietnam’s comic book tradition – and the books you should seek out.

The term ‘Viet comics’ was coined in 1960 by the magazine Floral Age Bimonthly to refer to sequential art being created in Vietnam, which was then going through something of a renaissance.

Comics in Vietnam had been appearing since the 1930s, but they were often hijacked by the state or anti-colonial factions as a propaganda device used throughout Vietnamese modern history as vehicles for teaching morality to children and distributing state-sponsored ideology. Nguyen Hong Phuc, a Master’s student at Kyoto Seika University, wrote in a fantastic article for the Kyoto Review that “in response to the needs of children, the government attached special importance in encouraging the creation of comics… The content of these publications was broadly educational and offered lessons in moral philosophy for the reader.”

By the 1980s, things started to change with the ongoing arrival of American comics, bandes dessineés from France and Japanese manga – much of it pirated and reprinted in Vietnamese.

If you walk around Hanoi’s Old Quarter today, you can still find shops selling bootlegged Tintin comics, re-drawn into tiny flip books. Easily the best thing about these curios is the way the artists only focused on reproducing the important parts of the panels; characters’ feet are usually nothing more than rough blobs, whereas faces are recreated with perfect accuracy.

Particularly driven by the arrival of the Japanese manga Doraemon in the 1990s, Vietnamese audiences turned away from the state-sponsored, moralising comics of previous decades and started reading for pleasure. Nguyen Hong Phuc notes that “it was later in 1995 when the manga storm would really hit with the publication of Sailor Moon and Dragon Ball. Suddenly Vietnamese comics with educational and moral stories were overwhelmed and dull by comparison.” These foreign works sparked a new wave of young Vietnamese artists ready to shake off the Confucian idea that any story needs to function like a fable.

Through artist collectives like Comi, authors and illustrators from Vietnam are reaching bigger audiences than ever. Kind of like Patreon or even roleplaying game resources sites like the DM’s Guild, Comi allows authors and artists to self-publish comics and illustrated stories – some you pay for, but most are free – for anyone to read and enjoy.

It’s exclusively in Vietnamese, though following along with the pictures gives a sense of the unique artistic style that’s developing in the community. There’s one story about a kid whose brother is a literal T-Rex and, even though there’s no way to tell what they’re saying without knowledge of Vietnamese, it’s charming beyond belief.

Let’s take a look at some of the incredible comics published in Vietnam that you can find in English, as well as some international works with a special connection to the country.

Originally published in 2014, Long Than Tuong is the result of one of Vietnam’s biggest-ever crowdfunding campaigns and roughly a decade of work by Nguyen Thanh Phong and Nguyen Khanh Duong.

It’s a three-volume piece of grand historical fiction, set in a world where “ancient Greek scientists” implanted sensitive information in the DNA of special people called Clios. It turns out that this information can be passed down from generation to generation, and those descended from the Clios are hunted for the knowledge they carry.

This epic, time-jumping, ass-kicking historical thriller – part-Cloud Atlas, part-Manchurian Candidate – is instantly gripping, with powerful characters and a great big mystery at its heart waiting to be unwrapped.

It’s also packed with little morsels of Vietnamese life, from the modern day to the 13th-century war against the Mongol Empire. Drawn in black and white, the art foregoes realism for an exaggerated, slightly impressionistic style that keeps the pace moving nicely. As Scott McCloud says, “By stripping down an image to its essential ‘meaning’, an artist can amplify that meaning in a way that realistic art can’t.” If you want the ultimate example of this, read Maus by Art Speigelman.

Long Than Tuong won the Silver Award at Japan’s 2016 International MANGA Awards, and its first volume received an English translation the following year. It’s available on Comixology for $2.99 and is well worth the read.

The Best We Could Do: An Illustrated Memoir

In the wake of the Vietnam War, more than a million Vietnamese refugees arrived on American soil, seeking to build a new life.

Second-generation Vietnamese-American author Thi Bui’s book The Best We Could Do: An Illustrated Memoir is a story of deep introspection, displacement and personal struggle. Moving to California to raise her son in proximity to her immigrant parents, Bui’s protagonist grapples with a seemingly-insurmountable generational disconnect. Page 36 literally shows her as a child with a Vietnam-shaped hole in her back, staring out across the ocean. “If I could see Vietnam as a real place, and not a symbol of something lost… I would see my parents as real people… and learn to love them better.”

The Best We Could Do is a powerful story about loss and love, beautifully illustrated and inked in soft watercolours that capture the sense of faded memories and half-imagined places perfectly. It’s a haunting read and the winner of the American Book Award from Stanford University.

Marcelino Truong is the son of a Vietnamese father and French mother. In 1961, his father, an employee of the South Vietnamese embassy in the US, is called back to Saigon to serve as personal interpreter to Prime Minister Ngo Dinh Diem. What follows is an account that sometimes seems at odds with itself, but nevertheless manages to be deeply moving and very human.

This slice of history is at once grand in its aspirations to present a complete social and political picture of Saigon at the start of the 1960s, and at the same time very small. It’s a story about four kids growing up in a nation at war. It’s about memories of violence and love. It’s also about Truong’s mother’s struggles with bipolar disorder and the hardships of otherness.

Such a Lovely Little War was translated from the original French in 2016 and, along with its companion volume Saigon Calling, has received international acclaim. Its illustrative style mixes the slightly cartoonish characters and rich, realistic backgrounds of other French autobiographical artists (Jerusalem and Burma by Guy Delisle spring to mind) with touches of single-colour washes that are very reminiscent of Thi Bui’s work.