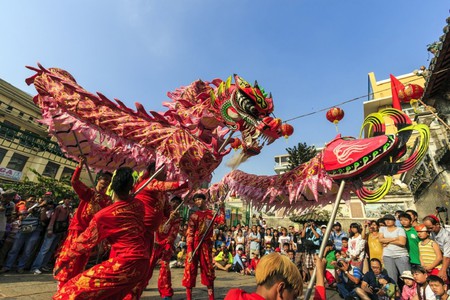 Tết is by far the biggest celebration in Vietnam. Every year, millions of people fly, drive and float their way back to their hometowns to spend quality time with their friends and families. The meals are big, the songs are loud, and everyone’s in a good mood. Vietnamese people wait all year for this, but what is Tết?

Pronounced: Tut (Though Tet is fine.)

The Tết holiday coincides with the Chinese Lunar New Year, which falls sometime around the end of January, or the beginning of February. Generally speaking, Tết is a time to dish out the spoils from a prosperous year — to bring good fortune through generosity. In the months leading up to the holiday, people work long hours to pay for lavish gifts and celebrations. But it’s time spent with family and friends that makes Tết so special. 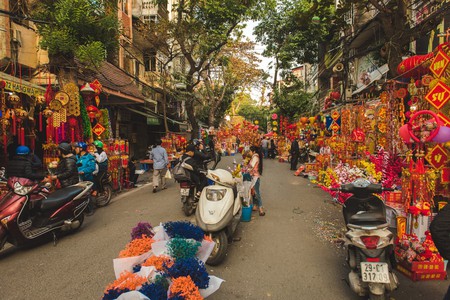 Picking up some decorations for Tet | © AngelaGrant/Shutterstock

The first day of Tết is meant to be for immediate family. Parents and grandparents hand out lucky money to their children and grandchildren — usually cash gifts in red envelopes, which is the color of luck. For kids, this means it’s time to load up on new toys and snacks. After the immediate family, it’s time to celebrate with friends and neighbors. 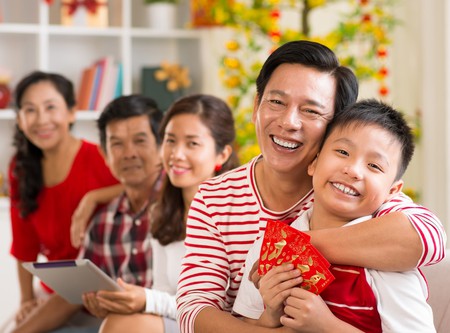 Wealthier families spring for dance ceremonies, often featuring lion dancers (Múa Lân). People believe that the noise from drums and firecrackers keeps evil spirits away. Mood is an important way to receive blessings, so the songs are loud and festive with many hearty toasts of “Một, hai, ba, dzô!” (one, two, cheers, cheers!) 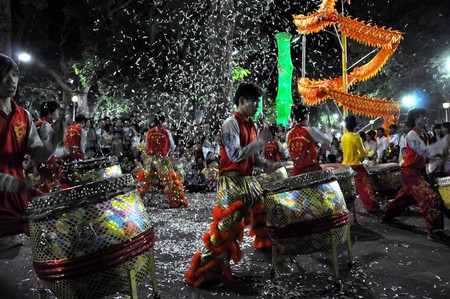 Drums are part of Tet | © salajean/Shutterstock

The first visitor of the year is an important consideration in households, because their guest’s status and moral character are decisive harbingers for the upcoming year’s fortunes. Well-respected guests bring good luck. After the first guest, many people are invited to come celebrate together. If you’re a foreigner, expect to be dragged into numerous circles of drunk friends. This is a time to party, after all.

Flowers are intricately linked to Tết, and different flowers represent different messages in the home. In the south, you’ll mostly see yellow apricot flowers — a symbol of wealth. In the north, you’ll see pink peach flowers — the color of seduction. To go along with the flowers, people hang envelopes with lucky money around their homes. For public areas, the money in the envelopes is usually fake. 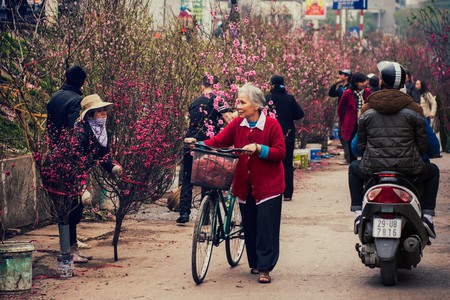 The most famous snack associated with Tết is Bánh tét — or Tết cake — which is sticky rice, mung bean and pork, boiled inside a leaf. Roadside carts selling these cylindrical green bundles pop up everywhere as the holiday approaches. Just the sight of a bicycle loaded with Tết cakes gets people excited, because it means their favorite holiday is almost here. 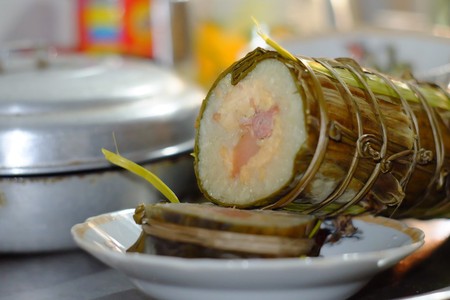 Families also have large fruit trays in their homes, featuring plums, bananas, pomelos and tangerines. The more fruit, the better. They’re symbolic of fertility in the upcoming year. No fruit means no babies. Dried fruit is also a popular snack to give to children during the holiday, along with peanut brittle and coconut candies. 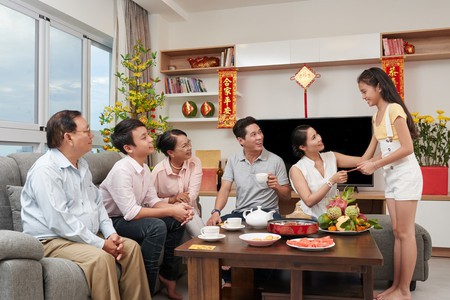 The most joyous part of Tết, though, is the meals. They are huge, delicious, and the room is typically full of laughter. People who haven’t seen each other in months catch up and share stories, drinking a lot of beer and liquor in the process. Don’t be surprised if you hear families still going strong in the very early hours of the morning.

The only words you need to know

Learn these words, because you’ll be hearing and saying them a lot should you find yourself in Vietnam during Tết.