What's the Difference Between Spring Rolls and Summer Rolls? 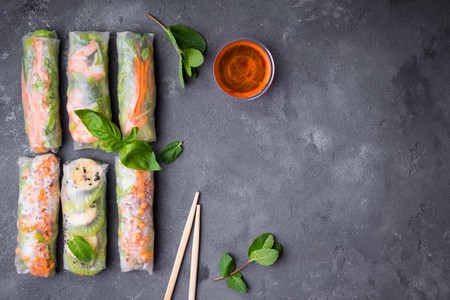 Springs rolls are to Asian cuisine what pizza is to Italian. Believed to have originated in China, these delightful, crunchy rolls have become hugely popular around the world, and are a common sight across Southeast Asia. Vietnam incorporates spring rolls in many of its dishes, but is more famous for its summer rolls (gỏi cuốn). Fresher, lighter and decidedly healthier than its deep-fried cousin, it’s a completely different food experience altogether.

A brief history of the spring roll

The spring roll began as a traditional food consumed in (unsurprisingly) the spring season. The roll as we know it is believed to have originated from eastern China during the Jin Dynasty between 266 to 420 A.D. The East’s long, cold winters meant families had to largely rely on pickled vegetables, preserved from the previous summer as they awaited the warmer months. When spring finally arrived and fresh vegetables could be harvested, families would celebrate by making a pancake and wrapping it full of the season’s freshest vegetables, earning it the nickname ‘spring roll’. 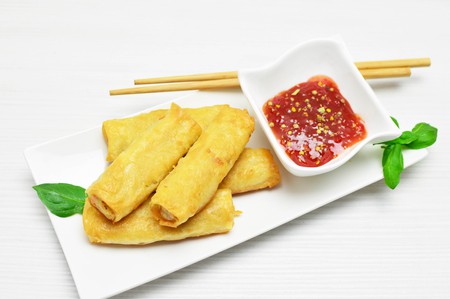 Spring rolls are typically rolled in a flour shell and stuffed with carrots, bamboo shoots, mushrooms, cabbage, chilis, and garlic. The ingredients inside these delicious rolls vary depending on the region and local culture; some areas, such as Hong Kong, normally feature pork and bean sprouts inside their spring rolls, while other regions in mainland China prefer a vegetarian version. The spring roll wrap is traditionally made by mixing flour and water into a thin mixture and brushing a very thin layer on a hot pan. Today, many spring rolls are wrapped in a thick rice paper before being deep-fried to a golden brown.

The Chinese Spring Festival, or Chinese New Year, is one of the most important cultural celebrations in the country. The festival traditionally honours deceased family members and deities and is a time to reflect on mythological Chinese tales. Family members return to their home villages from the big cities to reunite with their loved ones and cook gourmet meals to share with the family. The spring roll continues to be appear on Chinese dinner tables during this time to celebrate a new year and the upcoming spring season.

A Vietnamese take on the famous dish

Vietnamese spring rolls are normally wrapped in a wheat/flour skin and deep fried, giving it the crunchy exterior that we know and love. The usual ingredients are pork, shrimp, glass noodles, mushrooms, and shallots, but there are many different varieties (in the West, they are normally vegetarian). These rolls are served hot and are dipped in a soy sauce or fish sauce variation.

At a traditional Vietnamese restaurant, you are likely to see summer rolls on the menu. If it has a clear skin with fresh, raw vegetables inside, then you’ve met the spring roll’s wholesome counterpart: the summer roll. 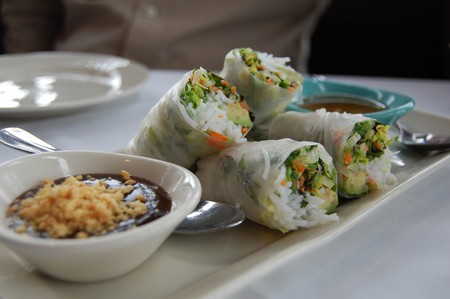 The summer roll has a transparent skin made of rice paper, and is served uncooked and cool. The inside bursts with flavour from an assortment of julienned herbs and vegetables, vermicelli noodles and pre-cooked shrimp. These rolls are usually served with a delicious peanut sauce for dipping, making a refreshingly delicious snack during Vietnam’s sticky summer months.

Called Gỏi cuốn in Vietnamese, these are believed to have originated in Vietnam, with families typically eating them at home to share with a large group of people. Summer rolls come in many variations, and vegetarians will be happy to know they can easily find them with tofu instead of shrimp.

Hearty and fried, or light and refreshing? These two delicious but different rolls offer something for everyone. Whether you belong on team spring roll or team summer roll, give both of these flavour-packed Southeast Asian specialties a try!