There are few tourist attractions as iconic as the Saigon Notre-Dame Basilica in Ho Chi Minh City. The church hosts a flock of new tourists every day who come to marvel at its colonial grandeur, while locals busily set up makeshift stations to sell local crafts and treats to passersby. Here is a quick guide to one of the city’s most popular tourist attractions.

The history of the Saigon Notre-Dame Basilica

Saigon Notre-Dame Basilica was constructed from 1863-1880 during the French colonial occupation of Vietnam. The cathedral displays distinct neo-Romanesque features, such as the two giant bell towers (holding six bronze bells), ornate stained glass windows, and a red brick facade that fascinated locals during its construction. The bricks were imported from Marseilles and were incredibly unique during that time period. It was conferred a Basilica by the Vatican in 1959 and still serves as a religious institution to Catholics in Ho Chi Minh City. 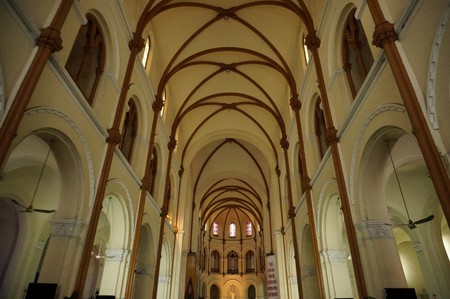 The stunning interior features high, domed ceilings framed with dark brown arches that crisscross over the ceiling and extend down to column the hallway. Elegant white trim adorns the columns while curved stained glass windows filter sunlight onto central portraits of Jesus Christ at the altar. Its beauty is magnified by the required silence inside the Basilica and truly takes your breath away.

Our Lady of Peace 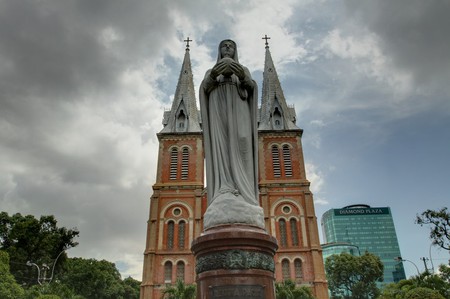 Outside the church stands a majestic four-meter-tall statue of the Virgin Mary that was added in 1959. The statue was the site of a “miracle” in 2005 after visitors claimed to have witnessed the statue shedding a single tear. Thousands of local Vietnamese Catholics and tourists swarmed the statue, prompting police intervention to maintain order as well as direct traffic to avoid the severe jams caused by the hordes of visitors. The Catholic Church of Vietnam ultimately refuted the miracle, but dozens of tourists and locals still visit the statue in the hopes of witnessing another “miracle.”

The Basilica is currently undergoing a massive renovation project that began in August 2017 and is expected to last until June 2020. The costly endeavor is being funded by philanthropists and church-goers and it includes a new tile roof, a reinforced foundation, repairing the bell system, replacing broken sheets of stained glass, replacing damaged bricks, and other general maintenance. The Basilica is closed to tourists during this time but remains a site of worship for Vietnamese Catholics every Sunday where a mass is held at 9:30 a.m. in both Vietnamese and English. 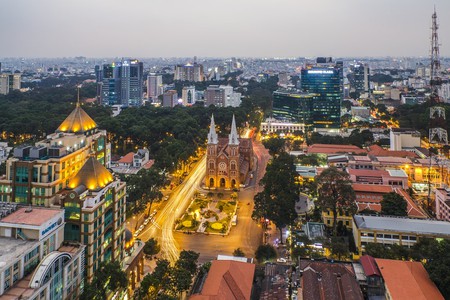 It will be a few more years before the Basilica is ready to be the subject of your photo lens, but when it’s ready it will be more beautiful than ever. In the meantime, tourists are still welcome to visit the Basilica’s grounds in the heart of District 1 and is just across the street from the Saigon Central Post Office.