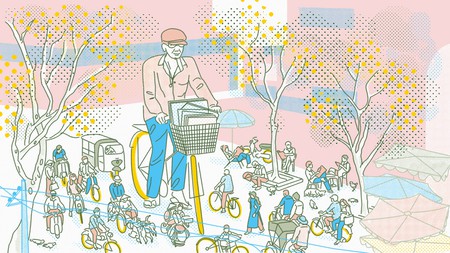 Ho Chi Minh City is a vibrant place, steeped in history. Through his career delivering newspapers by bicycle, Mr Nguyen Kim Son has seen both the city and his line of work change almost beyond recognition. So what drives the last man bringing bulletins by bike in Vietnam’s largest city to continue? Greg Lea hears his story.

Those looking for tranquillity can find relative calm before the sun rises. Groups of men and women gather in the city’s parks, practising tai chi before the fierce daytime heat forces them to seek shelter. Noodle sellers set up plastic stools on the street, readying themselves for the morning rush. And Mr Nguyen Kim Son hops on his bicycle and begins delivering newspapers to his customers, just as he has done almost every day for the last 45 years.

Mr Son is the last of his kind. As across the world, newspaper circulation is down in Vietnam. Smartphones are ubiquitous, and Saigon is a youthful city. Much of the population has grown up outside of a print publication culture. Business has consequently slowed for Mr Son and his wife Thu, who runs a newsstand in the central District 3 while her husband is out delivering. 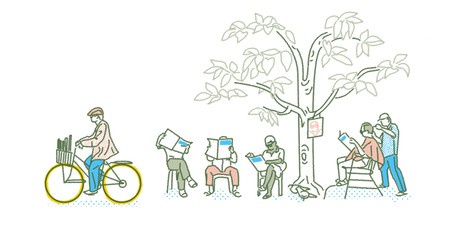 “It’s more difficult for us now,” Mr Son says with an air of weariness mixed with acceptance.

“Years ago, in the golden age of newspapers, people queued up to buy copies. On some days we closed at 7pm. Now we only stay open until 2pm, because everyone has already read the day’s news. Most of my colleagues stopped because of their old age, and because their income was no longer enough.”

Mr Son has no plans to join his erstwhile associates in retirement. For him, this is more than a job.

It all began in 1975, shortly after the North Vietnamese captured Saigon and brought a 19-year-long conflict to an end. Son was 18. His mother, a Hanoi native, had moved south during a 300-day period of free movement before the country was divided in two in 1954. Upon arrival she opened a newsstand. It was Son’s destiny to take over once he came of age.

“I couldn’t afford to go to university, and my family wasn’t able to give me any money,” he says. “But my mum gave me the wings to start my new life: her newsstand.”

Saigon has changed beyond recognition since Son posted his first newspaper through a customer’s door. The population has swelled from around 2.5 million in 1975 to nine million today. Skyscrapers have sprung up at a dizzying rate. Estimates suggest that 8.5 million motorbikes now swarm through Saigon’s streets. Car ownership, unattainable to the vast majority half a century ago, is on the rise.

Mr Son has been the bearer of news, both good and bad, that has defined modern-day Vietnam. In 1977, aged 21, he delivered reports detailing the country’s accession to the United Nations. Two years later came the invasion of Cambodia and the removal from power of the Khmer Rouge. Mr Son had been in the job for 20 years when Vietnam established full diplomatic relations with the United States. In 2019, he distributed bulletins on the Trump-Kim summit in Hanoi.

Remarkably, though, Mr Son’s day-to-day role has hardly changed in 45 years. With his black beret and long trousers, he is something of a throwback to an older, more elegant Saigon. He speaks gently and slowly. And although the bicycle may be hard work on his 63-year-old legs, he still prefers it to the engine-powered equivalent. He once suffered a motorbike accident that led to a broken thigh bone and weeks off work. Mr Son cannot afford a repeat.

His attire and choice of vehicle lend him an air of serenity that is at odds with the chaos and commotion of his environment. He goes about his job without fuss, even though it is not as easy as it once was. 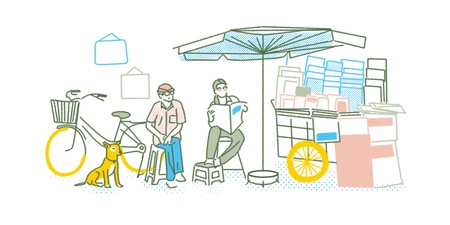 “At the moment, I only deliver around 10 newspapers a day,” he says. “I also sell some to people on the street and my wife sells more at the newsstand, but it’s unpredictable.

“We have started to sell other products, too, including magazines. Sometimes foreigners come to buy our maps, but most use their phones and have no need for a paper version. My brother-in-law makes rice noodles. We decided to sell some at our newsstand to make a little more money.”

An increase in customers is not without its drawbacks, however. In the past, Mr Son and Thu often found themselves overwhelmed. Not all of his clients were forgiving of unforeseen delays.

“A few years ago, my delivery schedule wasn’t stable,” he explains. “The publishers weren’t very well organised, so I had to wait for collection at the printing house. I sometimes delivered the newspapers late and some customers were annoyed by that. Now the industry has modernised, but people don’t read newspapers as much anymore.”

Mr Son would no doubt prefer a little more business. But he is still content with his lot. Having his wife by his side certainly helps.

“We’ve been married since 1986,” he says with a smile. “Our day-to-day life has been the same for years. We’ve lived our lives together and enjoyed every moment together. Our life is quiet and peaceful.”

Has he ever contemplated quitting or finding another way to make a living?

“No,” he says firmly. “My job is the life that my mother gave me. I’m not going to stop until I’m too old to work.”

Soon it is 2pm and time to close the stand. Thu typically departs on the bicycle a little earlier, leaving her husband to conclude the day’s business. He will return home on foot, re-joining his wife for some well-earned relaxation. After a taxing eight-hour shift, it is important for Mr Son to rest his weary limbs. Tomorrow, and every day, he will rise before the sun.