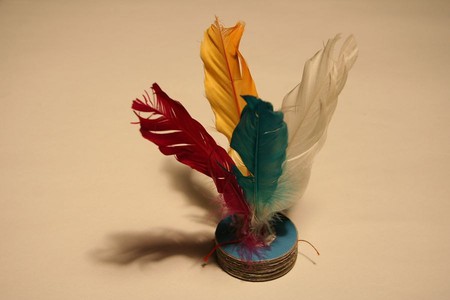 It’s known as đá cầu in Vietnam and jianzi in China, but it’s the same game that’s played all around the world — a kind of foot badminton. From schoolchildren to the elderly, this simple pastime has won the hearts of millions. Take a look at one of Vietnam’s healthiest obsessions.

The shuttlecock for đá cầu

All you need to play this game is the shuttlecock, which is made of feathers, washers and a hitting disc. The washers are often made of metal, but plastic is used as well. The hitting disc — the part where your foot makes contact — can be plastic, cork, rubber or some kind of cushion. Some people prefer bright, colorful feathers, but simple, authentic feathers seem to be more popular in Vietnam. 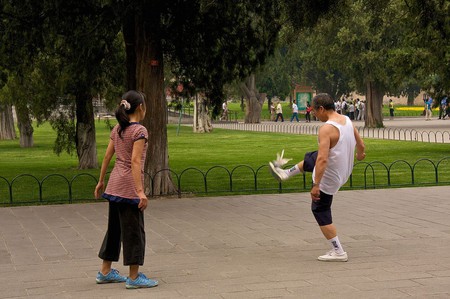 The history of đá cầu

The first records of the game date back to the 2nd century BC, during the Han Dynasty in China. It was originally used to keep soldiers healthy and entertained — an alternative to cuju, which involved kicking a ball through a net. From there, the game spread throughout Asia, taking on various names through the years. While China and Vietnam are among the best at the competitive level, the game has strong followings in many countries around the world.

The rules vary with the style of game being played — whether it’s artful or competitive — but one general rule holds true for all versions: Keep the shuttlecock in the air. You can use feet, knees, shoulders, your chest and even your head. The only time you can use your hands is when you’re playing the artful version with friends. In that case, the odd swat to keep the game moving is fine.

For the artful version, the game is all about style and skill. It’s a combination of gymnastics and ballet, where the players essentially perform for each other. The players have long since mastered the basics of hitting the shuttlecock, so they try creative moves, such as closing their eyes, or kicking behind their back. The more difficult the move they can pull off, the better. In the video below, you’ll hear the other players applauding when one of them makes an impressive play.

For the competitive version of đá cầu, the court and net are nearly the same as those used for badminton. Many parks in Vietnam have public nets for people to use. Because the competitive version is so much more demanding, you’ll usually see young and fit people playing this version. Most kids and casual players stick with the artful version.

When you see groups of people playing đá cầu in Vietnam, you usually see them working together to keep the shuttlecock in the air, using creativity, focus and skill to keep the game going. The better the players, the more acrobatic the moves. There’s no scoring system — though the group may decide on a certain number of consecutive kicks they want to achieve before stopping. The point isn’t to make it more difficult for your partners. You want to make it easier, but with some artistic flair for bonus respect.

If you want to play the game, head to parks near town centers early in the morning, or around dusk. The game involves some cardio, so you’ll rarely see people playing it during the hot, midday hours — except for kids in schoolyards. Most groups are happy to let you join for fun, but don’t be surprised if you’re very bad. Most of the people you see making impressive behind-the-back kicks have been playing their whole lives.