Is it the End of Vietnam's Street Food? 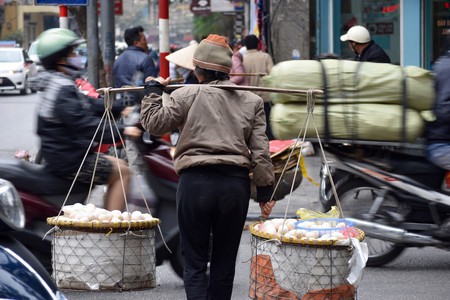 The future of Vietnam’s street food culture hangs in the balance as an ongoing debate about moving street vendors indoors blazes on.

It’s everything put together that makes the meal complete. The flimsy red and blue plastic furniture that looks as though it has been stolen from a preschool playground. The crowded streets of t-shirt clad backpackers and conical hat wearing locals weaving in and out of each other’s way like an orchestrated dance. The fragrant smells of fresh herbs, cooked fish and spiced broth mixed with the faint odors of gasoline from passing motorbikes. The Vietnamese street food experience extends far beyond the plate to encompass the surrounding chaos and charm of the culture. 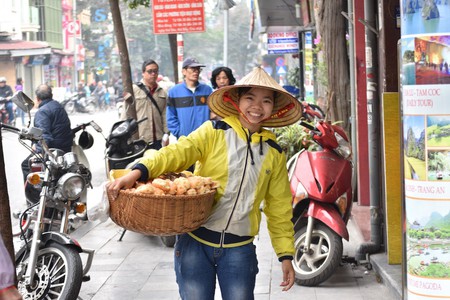 Inspired by these intrepid culinary explorers, I eventually find myself on the chaotic streets of Hanoi in northern Vietnam one cool morning in February. Having just enjoyed a warm cup of cà phê trứng—a Vietnamese egg coffee that is thickened with whipped eggs, vanilla and heavy cream, I go in search of street food.

In Vietnam’s capital city of over 7.5 million people, finding street food is an easy feat—easier than say, crossing the street. The city of Hanoi is split between the Old Quarter and French Quarter, each offering a distinct ambience. The Old Quarter is what one expects to see when visiting Vietnam for the first time. Deceptively frail older ladies pad through the quiet morning streets carrying heavy panniers laden with fruits and baked goods to sell. Motorbikes line the crumbling sidewalks where families have set up makeshift one-dish restaurants serving a steaming bowl of bún cha on plastic furniture.

In the neighboring French Quarter, the narrow street widen, and the weather worn facades are replaced with newer, French-inspired architecture—a testament to the days when France colonized the Southeast Asian country. The sidewalk stalls that are prevalent in the Old Quarter are seemingly replaced with brick and mortar restaurants and cafés in the tourist-facing French Quarter. The slow transition from street food to restaurants is a plague that has been sweeping across Southeast Asia, starting with Bangkok earlier this year. 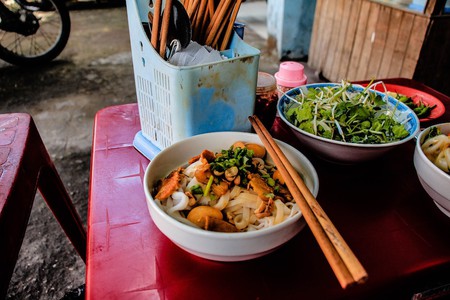 “In certain places, you won’t find any [street food] anymore,” Holliday tells me over the phone, one afternoon from his current home in Senegal. “Vietnam is transitioning from street markets to whatever is next.” Holliday—who lived in both Hanoi and Ho Chi Minh City for years—witnessed, first hand, how street food in Vietnam has been changing.

“The thing is, street food in Vietnam has an awful lot going against it and, by rights, it shouldn’t work,” writes Holliday in his novel, Eating Viet Nam. “It requires a certain tolerance of noise, humidity, cold, heat, wind, rain, street hassle of every shade, questionable hygiene, exhaust fumes, low seating and public displays of nose picking and zit squeezing.”

Given the conditions in which Vietnamese street food is eaten, Holliday writes that it is a testament to the street chefs and fresh ingredients that the experience should still be hotly sought after by travelers and locals alike. The thorn in the side of Vietnam’s street food culture is not the question of taste—far from it, in fact—but rather, it is hygiene.

Certain hygiene stipulations—such as a stall must be away from a polluted place, a waste collection system must be used, clean water must be accessible and only specific additives can be cooked with—must be met, according to a 2015 report by the World Health Organization. While imposed health and safety regulations on street food practices are crucial, Vietnam is a low income country that can make meeting these standards difficult. 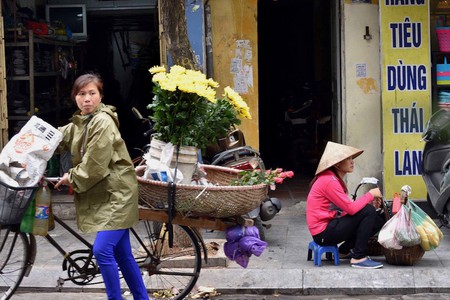 “Industrialization and development are taking place at a rapid pace and the environmental pollution that comes with them has a negative impact on hygiene and the ability to provide safe and clean street food,” reports the World Health Organization. “The supply of clean water to street food stalls is a big challenge in that regard.”

Holliday recalls seeing Vietnamese police crack down on street vendors, descending on markets and violently seizing panniers, stools and baskets from sellers who hadn’t run away quickly enough. The raids were part of an early, ongoing effort to clean the streets by forcing street vendors to either move indoors or shut down.

Enter the great Vietnam street food debate. On one hand, the government enforces regulations on street vendors in an effort to minimize foodborne illnesses that could negatively impact tourism. On the other hand, due to a myriad of external factors, not all the requirements are being met and street vendors have been pushed out completely. It’s a slow process; while Vietnam’s street food stalls will not shutter over night, the ‘scorched earth policy’—as Holliday calls it—points to an uncertain future for the very heartbeat of Vietnam’s culture and culinary identity. 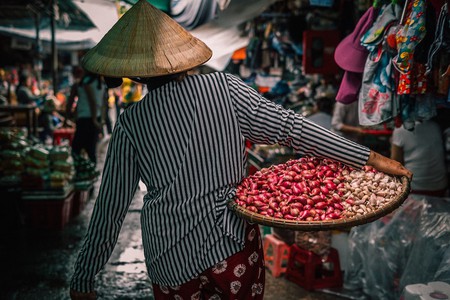 “If you’re inside an air conditioned room, you’re separated from life,” says Holliday. While Holliday concedes there is a clear benefit to moving street food vendors indoors to designated areas, he argues the sacrifice could end up impacting tourism in the very way Vietnamese officials are hoping to avoid. “People really love the street experience—the life on the street, the buzz—and I think in the Vietnamese minds they are making things better, but for the tourists, I don’t think they will like that.”

Holliday wistfully recalls a favorite market he used to visit in Hanoi called the Hang Day Market. “I used to go there and it was full of life and tons of food; then [Vietnamese officials] destroyed it to make a nice shiny new, underground market that they built a department store above. Years later, I went there to see how it had changed and it was completely dead: no noise, no smells, no life.”

On my first evening in Hanoi, I found myself on the corner of Chan Cam and Hang Trong looking for a quick meal to satisfy my hunger. I came across a sea of plastic chairs in front of an open garage where a young woman was ladling something delicious into a bowl. A one-dish eatery, I sat down and watched a bowl of soupy, oily, fragrant goodness slide in front of me. No frills, no fuss. The dish was pure pleasure, served in a dining room of open air and cement, set to a soundtrack of overheard conversations and motorbikes—just the way dining in Vietnam should be. An experience that, at least for now, can still be enjoyed.