How to Drive a Motorbike in Vietnam 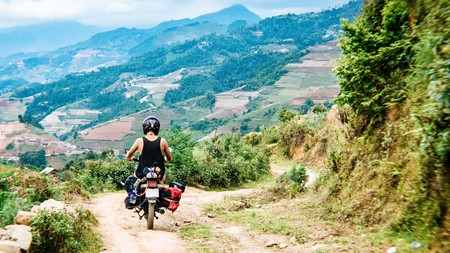 To the untrained eye, Vietnam’s traffic is absolute chaos. Nobody obeys any laws, the roads are overcrowded, and Vietnamese drivers often seem completely oblivious to everything around them. And yet, there’s a beauty to the madness. It flows naturally, like blood pulsing through a body with paved veins. This guide will help you to make sense of Vietnam’s traffic, because, once you do, it really is a lot of a fun to drive here.

The single most important rule

The only thing you need to worry about when you drive a motorbike in Vietnam is what’s directly in front of you. That’s it. Nothing else matters. Never look away from the road ahead of you. Trust that the drivers behind you are watching what’s in front of them, just like you are. It’s called the Cone of Awareness — the essential building block of Vietnamese driving — and it explains many of the baffling things you’ll see drivers do in Vietnam. But you can’t control them, so just make sure you don’t drive into anything.

The surest way to stay safe is to go with the flow. Be like a molecule of water in the river. Be a speck of dust blown by prevailing winds over the highways and back roads of this wonderful country. Find your zen and float along with the current. Do what everyone else is doing, because in Vietnam, there’s strength (and safety) in numbers. 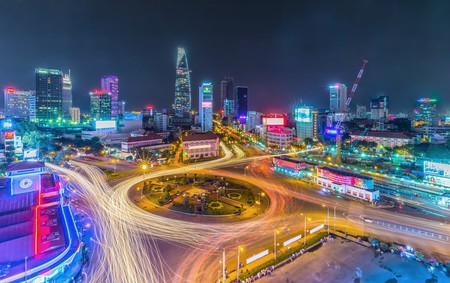 Be part of the flow | © Thoai/shutterstock

Always give others time to react

Whatever you do, do it gradually. Think about it as though you’re getting into a pool. If you hop on in, the water flows around you. Traffic in Vietnam works the same way. Don’t make snap decisions. No matter what you do or where you go, take your time. Make it easy for the other drivers to flow around you. 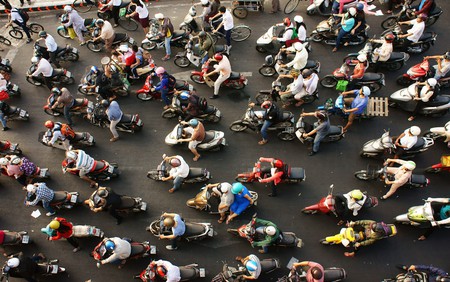 A molecule in the stream | © xuanhuongho/shutterstock

The problem is that most foreigners come to Vietnam still holding onto the idea that the other drivers around them will usually follow the rules. You need to shed this notion and quickly. Drivers in Vietnam do what they want, when they want. They’ll drive through red lights if they see a glimmer of an opening between transport trucks. They’ll drive the wrong way on a crowded highway if it’ll save them 10 seconds. Heck, they’ll force pedestrians off the sidewalk to move one bike-length ahead in traffic. You need to forget about laws, because the only thing that matters on Vietnamese roads is keeping yourself alive. Do keep a bit of cash ready for the police. Some of them get dollar signs in their eyes when they see a foreigner driving a motorbike.

The horn is your friend

Vietnamese drivers use horns like a form of echo location. It feels weird at first, but you have to learn to use yours so the people in front of you know you’re coming. And you also have to learn to listen for them, because the drivers behind you are trying to tell you what’s going on back there. 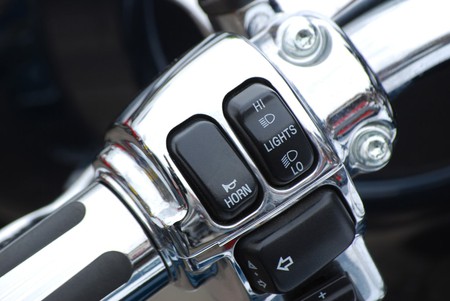 Let the big things have their space

Most people in motorbike accidents just end up with some road rash, or a broken bone if they’re really unlucky — assuming everyone had a decent helmet. (Get a good helmet!) But when the big things are involved, it’s a different story. Buses and trucks can kill in a blink, so give them all the space you can. 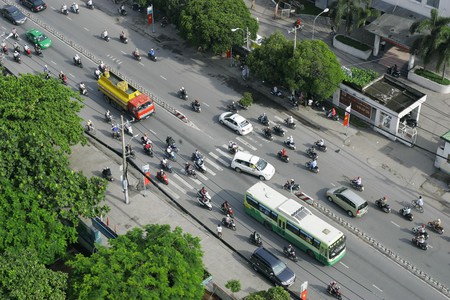 Hug the shoulder in rural areas

Vietnamese drivers play a messed up version of chicken where they drive straight at each other until the last second and then veer wildly back into their lanes. You do not want to be in their way when they jerk back over. Hug the shoulder so they aren’t forced to choose between you and a head-on collision. They’ll choose you. 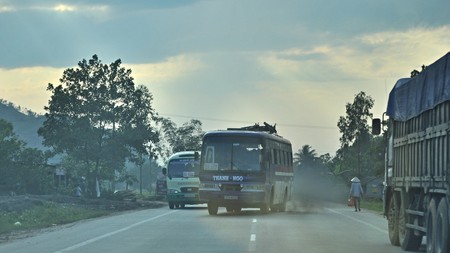 Always try to anticipate what everyone else could do. That’s the key to defensive driving — knowing what could happen so you can avoid it. Not everyone is trying to kill you, but it sure feels that way from time to time.

Driving in Vietnam isn’t nearly as scary as it looks. It’s actually a lot of fun once you understand how traffic moves, so pay attention to what’s in front of you and give people time to react. The rest will come naturally. For further tips on how to stay safe on Vietnam’s hectic roads, check out this article. Safe travels out there.