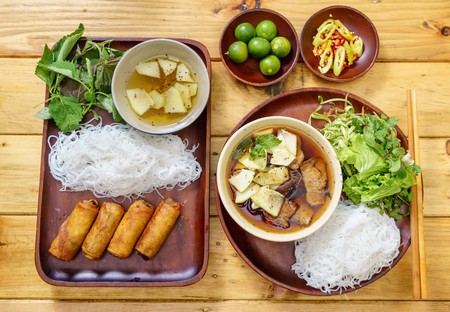 In April 2015, Bún Chả Hương Liên was just like any of the other noodle shops in Vietnam’s 1,000-year-old capital. Saigon beer bottles kicked around between blue plastic stools and cigarette smoke wafted through the air, mixing with the unmistakable scent of pork grilling on open flames. A month later, after US President Barack Obama and late celebrity chef Anthony Bourdain stepped inside, the restaurant would never be the same.

Bún Chả Hương Liên had been around for more than two decades prior to hosting the United States’ 44th president and in that time had served up countless bowls of Bún Chả, rice noodles topped with grilled pork and pickled vegetables. The three-storey, easy-to-miss establishment was, and still is, much more of a hole in the wall than anything resembling a high-end dining experience. Perhaps that’s the reason Anthony Bourdain, lover of Vietnamese cuisine and fan of all things authentic, chose the joint. On a warm May night, the restaurant’s owners were informed that a number of reporters and journalists from the international news media would be stopping by; they had no idea the US president himself would find a little blue plastic stool and change their restaurant forever. 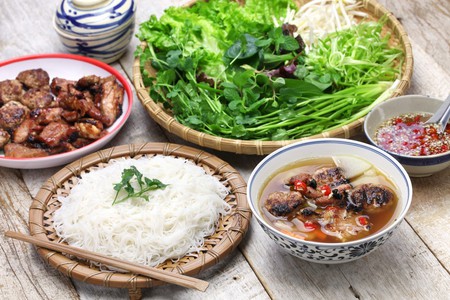 All the makings of great bun cha | © bonchan/Shutterstock

Chowing down on Northern Vietnamese cuisine

Just outside Hanoi’s French Quarter, Barack Obama and Anthony Bourdain took a spot between Vietnamese diners to film a segment for Bourdain’s popular television series, Parts Unknown. The six-dollar meal (including beers of course) was not too out of the ordinary for Obama, who was known to eat with locals whenever he could. While there’s some debate regarding the authenticity of the patrons in the restaurant, the delighted crowd waiting out front seemed sincere in their excitement. An hour later, the two emerged to cheers and flashbulbs. 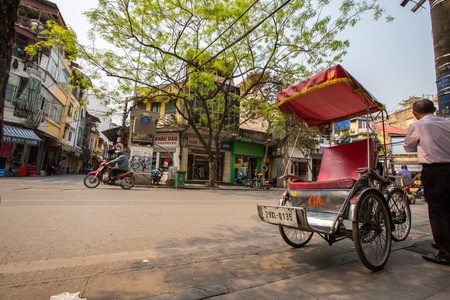 Before President Obama and Anthony Bourdain sat down in Bún Chả Hương Liên, the restaurant had less than 10 reviews on TripAdvisor. Today they have nearly 500, many of which reference the famous meal. The dishes that the president ordered are now listed proudly as the Combo Obama. Even in Ho Chi Minh City, more than 1500 kilometers to the south, restaurants now advertise their Bún Chả as Bún Chả Obama. In Hanoi, Bún Chả Hương Liên, which had always been a busy little place, is jam-packed most days. Their clientele remains a mixture of locals, expats and tourists, yet they’ve become much more widely known through the city and country.

Taste the legend of Bún Chả Hương Liên for yourself 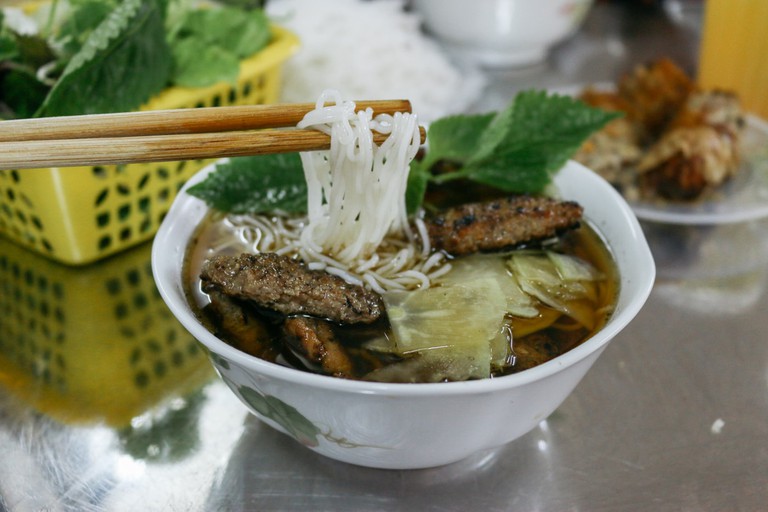 Bun Cha at Hung Lau in Hanoi | © Vu Pham Van / Culture Trip
Once you dig into a bowl of Bún Chả at this humble restaurant, you’ll believe all the hype. Bourdain and Obama’s visit have transformed the fortunes of Bún Chả Hương Liên, with long crowds vying for a taste of its namesake dish. The owners even turned the exact table and chairs where the pair sat into a mini-museum exhibit, firmly protected in floor-to-ceiling glass casing.
Open In Google Maps
24 Lê Văn Hư, Hanoi, Vietnam
+842439434106
Visit Facebook page
Give us feedback