Giant Stone Hands Hold Up This Golden Bridge in Vietnam 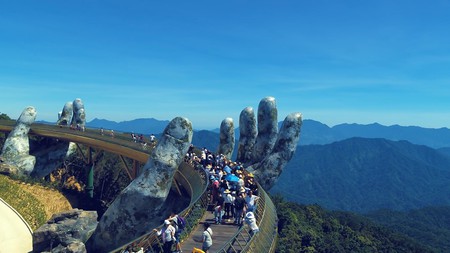 A new bridge just outside Danang, Vietnam, is causing a stir on social media with its mind-bending design.

There’s a new Instagram star in town. The recently erected Golden Bridge on the grounds of the Bà Nà Hills resort in Eastern Vietnam gives the illusion of being suspended in mid-air, held up by a pair of gargantuan stone hands.

The internet is going wild for the Games of Thrones-esque pedestrian crossing designed by Ho Chi Minh-based firm TA Corporation. The 150-metre-long (492-foot-long) structure opened in June and is part of a £1.5- billion ($2 billion) project underway to increase tourism in the area. The bridge is suspended 1,400 metres (4,593 feet) above sea level. As part of the resort’s growing Thien Thai Garden complex, it is divided into eight sections, each lined with purple Lobelia Chrysanthemums.

Close to 1.5 million visitors make their way to the Bà Nà Hills each year to enjoy the diverse attractions the hotel has to offer, including a mock French village, cable cars, and a theme park inspired by Jules Verne’s Journey to the Centre of the Earth and 20,000 Leagues Under the Sea.

Now walking the golden bridge has been added to visitors’ to-do list, both for the photo opp and for the chance to take in some majestic mountain views.