A Regional Guide to Vietnamese Cuisine

Vietnam is a foodie paradise, with restaurants and street vendors serving up fresh and locally sourced cuisine. With each area of Vietnam so distinct in its culture and climate, this list will guide you to the best local specialities in each part of country.

Ho Chi Minh City, formerly known as Saigon, has many local specialties which feature unique twists on Vietnamese cuisine. What sets Southern pho, a beef or chicken broth served with rice noodles, apart from pho throughout the rest of the country is its special and intricate blend of fresh herbs and spices, including star anise, cinnamon, ginger and coriander to name a few. Southern pho is typically spicier than its northern counterpart, and is usually served with chili peppers and lime which is to be added directly to the broth. For breakfast lunch or dinner, pho is a savory, spicy, and hearty treat. Try Pho 24, which has chains internationally, or take a seat at any street vendor for a more authentic experience. 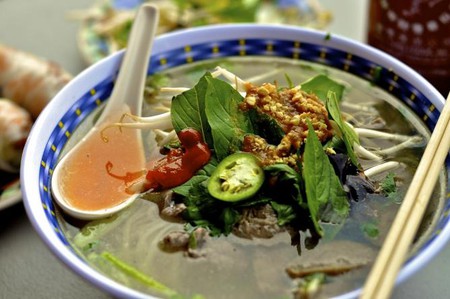 My Tho: Hu tieu

Located in the Mekong Delta region, My Tho has adopted hu tieu, a Cambodian-Chinese staple which was adapted and made its own by those in this region. It is a dish consisting of a slightly sweet broth, usually pork, mixed with a variety of spices and seafood. It’s basically Vietnam’s answer to ‘surf-and-turf’. While recipes and flavors for this dish vary by location, My Tho is famous for its own version, which uses tapioca or wonton noodles and is often overflowing with meat and seafood. Hủ Tiếu Mì Hoành Thánh 44 is tasty and offers the best bang for your buck. 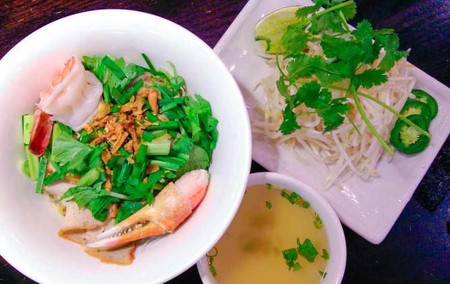 Hoi An is known as the culinary capital of Vietnam, with dozens of cooking classes around the city offering visitors the opportunity to cook and taste their own custom creations. Hoi An cuisine is unique in its range of flavors, offering everything from sautéed squid to broiled snails. While it is difficult to choose just one dish from Hoi An, banh bao vac, or white rose, is a dish unique to Hoi An and its original recipe remains a tightly guarded secret. These small and delicate dumplings are shaped like a rose, filled with shrimp and topped with crispy onions. Although you can get them almost anywhere in Hoi An, try The Market for a hands-on marketplace experience. 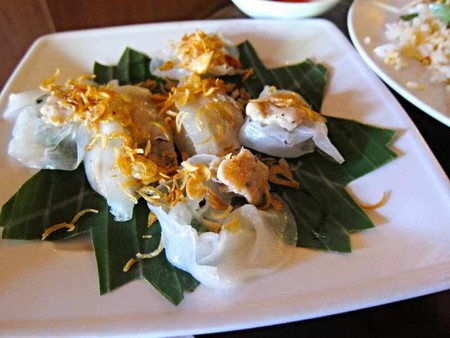 Huế, the former capital of Vietnam during the Nguyen dynasty, is a historic and scenic city in the heart of Vietnam. Because of its royal history, Huế’s culture is sophisticated and flavorful, borrowing ingredients and flavors from around Vietnam, as well as culinary influences from its past imperial rulers, including the Chinese and the French. Bánh bèo are small, thin rice paper crêpes, often eaten as an appetizer. They are served individually, and are usually topped with dried shrimp and served with tangy fish sauce and scallions. The presentation and simplicity of this dish is what sets it apart from other specialties in hue, although bánh it ram is another local treat which shouldn’t be missed. 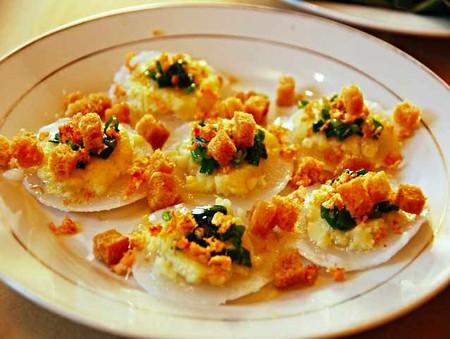 Mì quảng, or quang noodles, is a noodle and broth dish unique to the Quang Nam province of Central Vietnam. What sets quang noodles apart from other noodle dishes throughout the rest of the country are their yellow-tinted noodles, modest broth and seasonings. Quang noodles feature only a small amount of a rich pork broth which is quickly soaked into the noodles, and features a garnish of peanuts or crispy rice crackers on top. If you’re someone with a more adventurous palate, Da Nang also offers oc hut, or sucking snail, which is sold at most food stalls throughout the country. It’s sautéed in oil and served with papaya and mango. 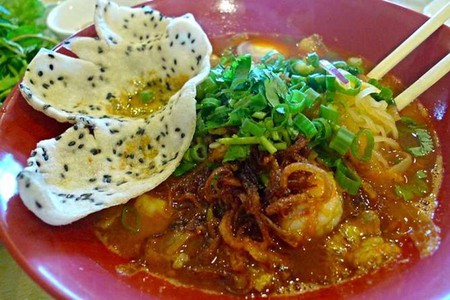 The modern capital city of Hanoi is as rich in flavors as it is in culture. Hanoi is a foodie haven, with shops throughout the city offering cuisine from around the world. Today, Hanoi food is an eclectic mix of Vietnamese street food, French colonial influence, and Western comfort food. Bun cha is Vietnamese comfort food, consisting of juicy grilled pork served with a side of rice noodles and herbs. It’s filling and flavorful and makes you feel like you’re eating a home-cooked meal with family, even if you’re sitting on a small blue bench next to a food cart. Check out Hanoi’s Top 10 Restaurants and take your mouth on a culinary journey. 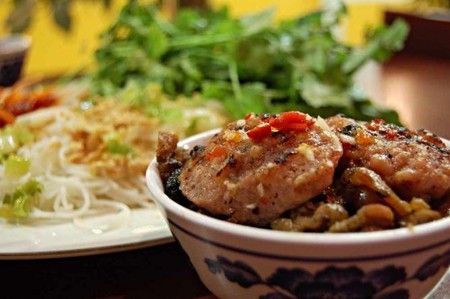 Every country needs to have a signature sandwich, and bánh mi is Vietnam’s. Bánh mi is a general term for Vietnamese bread, however it more commonly refers to a crunchy French baguette filled with meat pâté, sliced pork, cilantro, and pickled vegetables. Variations on this delicious street food exist everywhere, but they are ubiquitous in Hanoi and available in many variations. Banh Mi 25 is a modest street cart, boasting cheap and delicious sandwiches loaded with meat. It’s a true carnivore’s paradise.

Bánh bao is a perfect snack to satisfy late-night cravings. Although their origins are likely Chinese, these soft, pillowy steamed buns have been adopted to fit the more eccentric and adventurous Vietnamese audience. You can find bánh bao filled with various types of meats and quail eggs, although if you can get your hands on the BBQ pulled-pork variety you have officially won the street food lottery.