Discover the Most Beautiful Beaches Near Hoi An 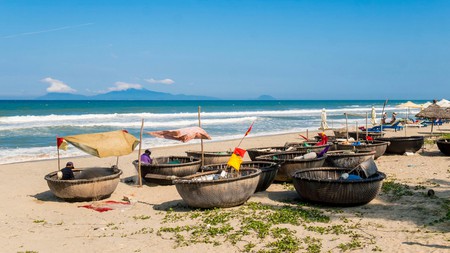 An Bang beach is one of the must-see spots on the coast near Hoi An. | © Hemis / Alamy Stock Photo

Hoi An is a tourist hotspot, thanks to its authentic looking streets and striking yellow buildings. But it’s the proximity to some of the most beautiful beaches in the world that makes it such an attractive place to visit. Let Culture Trip guide you through the best of Hoi An’s coast.

Hoi An might be the most picturesque spot in all of Vietnam, its preserved ancient houses, winding rivers and endless traditional lanterns giving it an almost Disney-like quality as the Asian city many dream about. But most forget that its shoreline setting contributes heavily to that vibe, with some of the most stunning beaches in all of central Vietnam.

From rough-and-ready spots crowded with backpackers, to simple and serene locations where only locals go; all the way through to luxe finds at the far ends, closed-off by resorts, we’re giving you the inside scoop on Hoi An’s best beaches, how you can access them and where to spend your time.

The tourist beach. The party beach. The late-night beach. An Bang has been called lots of things over the years, but there’s no denying it’s also Hoi An’s most popular and one of the best around. With golden sands that spread for miles, An Bang is one of the few that’s rarely faced erosion issues; and while its waters can be a little murky, they’re decent enough for a bracing swim or two. 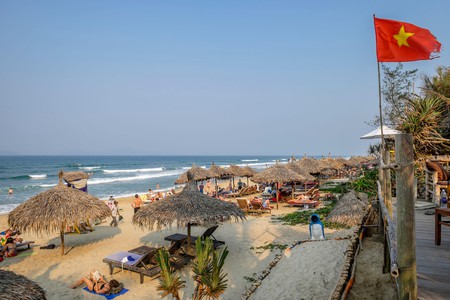 An Bang can get crowded of course – but with good reason, the beach holds the vast majority of Hoi An’s coastal bars, restaurants and homestays. Grab a towel and lay out for free among last night’s recovering backpackers, or splash out at a fancy seaside establishment – we’re big fans of Shore Club, a Bali-like spot with quality cocktails, daybeds and a little pool.

The southern end of An Bang might technically be part of the same beach, but it almost feels like a different world altogether – its sands softer, its waters less choppy and the whole affair generally more sedate compared to other parts of Hoi An. And while the increasing number of beach bars along its shores are starting to change all that, they’re balanced out by homestay spots and local restaurants, ensuring the charm won’t completely die anytime soon.

For a seaside glimpse at how chilled it really is, drop into Salt Pub, an Aussie-run beach bar where the beers are ice-cold, there’s great seafood and even better views. Rent a surfboard from the pub and hit the waves, An Bang South is one of the best spots to catch some surf around these parts.

Da Nang’s beaches are easily some of Vietnam’s best and there’s an argument to be made that their wide frontages and white sands make them better than Hoi An’s. For the best of both, head up to Ha My beach, north of An Bang, a pristine slice of beach that has all the wonderment of Da Nang’s shores, but is set within Hoi An’s city limits.

But the secret’s out though, and the lavish Four Seasons Resort has staked large claims to the strip, to the dismay of locals and visitors. Worry not though, right next door to the compound-like resort is Le Belhamy, a cute little boutique hotel styled after the Indochine period, with rooms for as little as $50 a night, and – best of all – sharing the same wide white sands and clear waters as its exclusive neighbour.

Resort after resort, Cua Dai stretches for miles along the southern end of Hoi An’s coast. Its luxe offerings are exactly where you’d expect people to laze by the water and order endless cocktails and cheeseburgers. But it’s not without a sense of irony as many of the far-south resorts suffer from erosion and all but seeing their so-called “Beach Resorts” turned overnight into “Waterfront Resorts”. 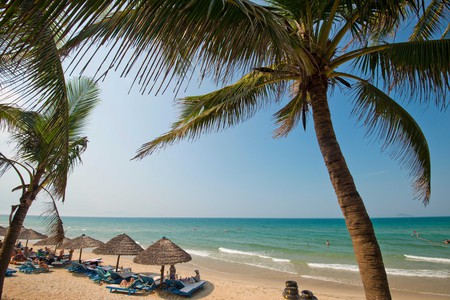 Still, with its few private beaches and pure sands, Cua Dai is still a wonder to behold – when you can behold it, that is. And far from what most people assume, it’s not off-limits to everyone but the ultra-rich, you just have to know where to dive in. The chic Palm Garden Resort, where a $10 day pass gives entrance to its private beach as well as an epic pool, is a good place to start.

Hidden Beach’s name is a bit of a misnomer, although it was probably ‘hidden’ from the hoards at one point. Set just past An Bang, right before the shoreline starts to be dominated by major resorts, it’s a chilled affair where local restaurants and pared-back bars dominate, frequented by locals escaping from the thronging tourists and in-the-know expats in search of some peace.

Here, it’s nothing but pure sands plus a couple of fishermen on the horizon – the tranquil escape you’ve long been looking for. Some say it got its name from the Hidden Beach Restaurant, although it was probably the other way around. It’s a great place to spend the day, featuring deliciously affordable local food, alongside free sun loungers and a day spa for extra relaxation.

South of Hoi An and a drive over the bridge, Binh Minh translates as ‘sunrise’, and it’s easy to see why. Its stunning white sands and crystal blue waters shining almost iridescently early in the morning. Stretching out for over three solid kilometres, it’s a striking affair, almost deserted at all hours of the day, giving you the feeling of having the entire shoreline all to yourself.

But keep in mind, the drawback is that there’s really not much around with only a few bungalows set close to the shore and a series of makeshift restaurants serving up Vietnamese soup noodles and banh mis. If you’re looking for a little slice of luxury among it all, head up to the Vinpearl Resort at its northern tip, frequented by golfers on holiday but also with a decent enough bar and restaurant for you to laze away the days.