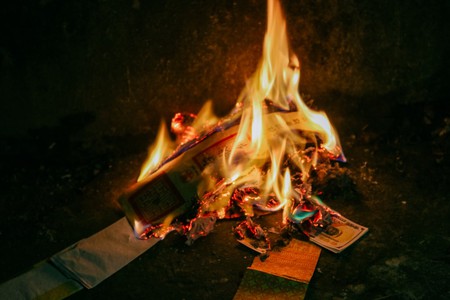 Multi-storied houses, luxury cars, motorbikes, laptops, toilets, servants, passports, rice cookers, TVs, other valuable items and of course, tons and tons of Benjamins go up in flames on the sidewalks of Vietnam. Not real ones, but paper models made from bamboo, collectively locally called hang ma (paper offerings). What does this signify?

Hell money/ghost money/spirit money…call it what ever you want. These are a form of joss paper resembling legal tender bank notes burnt as offerings to the deceased. It is essentially a way of showing respect to the dead that has become an important part of the culture.

The practice of ancestor worship is largely religious, stemming from the belief that the spirits of the deceased are still interested in the affairs of the world. This practice is common throughout countries in East Asia, specifically China and Vietnam. The idea is that the more offerings one burns for their dead relatives, the better their afterlives will be.

Many shops lining up the streets of Vietnam have stacks of fake $100 US Dollar bills among other types of hang ma for sale. People buy them in packages of various sizes. Some spend from as low as VND$200,000 (US$10.00) to even over VND$4,000,000, which is about US$200.00, on fake paper models of modern conveniences and spirit money. Some locals believe that spending so much will bring them prosperity, good luck and good health in return for their generosity. For others, this is a bit of a superstitious solution to resolve their ancestor’s financial problems. The spirit money is burned as a repayment of debt the deceased had accrued during life and had never been able to pay back. Another belief is that this money is given as a tribute to the God of Death in return for a short stay or to escape punishment. These are few of the many reasons joss paper is burned. 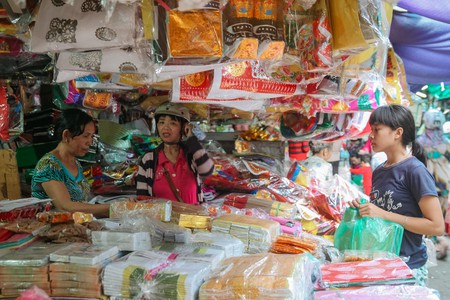 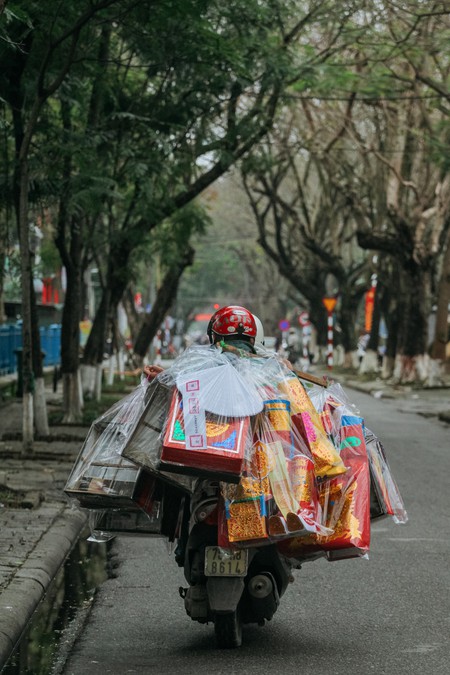 How did this even begin?

It may have all started from a scam. The tale is about a man who lived during the period of the Six Dynasties in China. His name was Cai Lun and he had a business selling paper. Back then, paper was not a popular commodity as the literary rates were low, so the people did not have reason to buy them. Cai Lun thought of a cunning way to boost the public demand for paper. He plotted with his wife and faked his own death. When the wife arranged a grand funeral for him, it attracted many people. The wife then started burning paper as an offering. Cai Lun’s coffin suddenly opened and voila, he was alive again. To the shocked attendees, he proclaimed that the paper burnt was transformed into money in the underworld which he used to bribe the King of the Underworld to let him escape. You can imagine his sales skyrocketed. Whether Cai Lun actually died or not — we will never know. Ultimately this is but one of the many legends floating around the origins of spirit money. 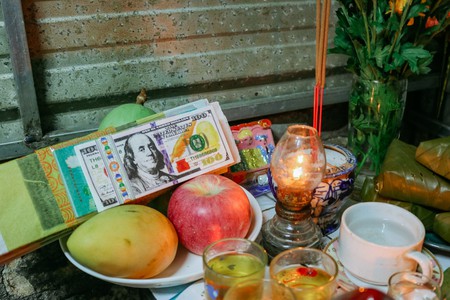 The burning of spirit money occurs on the first and 15th of every month based on the lunar calendar. These rituals are also performed at funerals and on death anniversaries of loved ones throughout the years. This practice is rather grand during the Vietnamese Lunar New Year, called Tet by the locals. There is also a surge in this spiritual spending during Vietnamese Lunar New Year. They wish for their ancestors to start their new year with plenty of money in their spiritual bank. 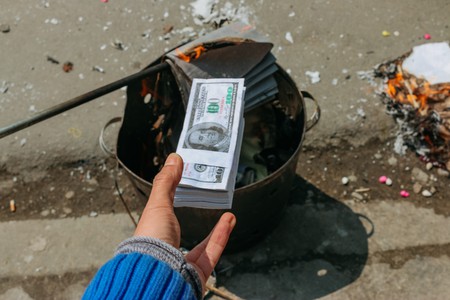 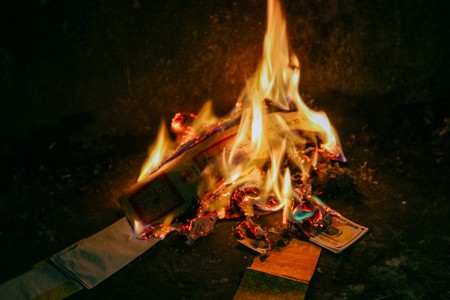 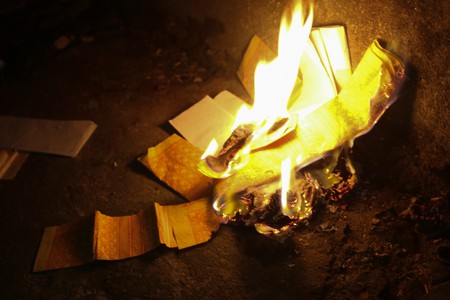 Unfortunately, many studies have shown that burning large quantities of this paper emits a cocktail or harmful substances into the air including carcinogenic chemicals such as polycyclic aromatic hydrocarbons, carbonyls and benzene — similar to the smoke emitted from incense, also widely used in religious rituals.

It’s hard to tell what the fate of the endearing practice will be, as it is rather deeply rooted in Asian culture.