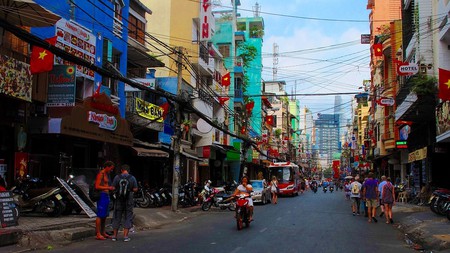 Bui Vien Street in the backpackers area of Ho Chi Minh City represents many different things to many different people. For those who love it, Bui Vien is a spectacle of vice that makes for some of the best entertainment you can buy. For others, it’s a testament to all that is depraved and ugly in humanity. Regardless of your moral stance, Bui Vien is a name that elicits strong reactions from anyone who has spent even just one night in the city—and here’s why.

What is Bui Vien?

In the daytime, Bui Vien Street is an eight-minute walk through a valley of malignant infrastructure and sheer cement walls. There are restaurants, massage parlors, hotels, hostels, pubs, souvenir shops, go-go bars and travel agencies. Visibly hungover tourists wander through the wet heat with a constant look of fear as hawkers prowl for the more gullible among them. Traffic roars by at dangerous speeds, and a hint of exhaust lingers in the hazy air. Bui Vien is as touristy as it gets in Ho Chi Minh City. It’s the epicenter of an entire industry—a rich vein of cash that feeds many. For backpackers, Bui Vien is a Vietnamese Mecca.

Bui Vien grew out of the post-war stagnation by offering accommodations to those new global travelers who could afford plane tickets but not the pleasure of staying in places with names like Majestic, Continental or Caravelle. When Vietnam began encouraging tourism, after it opened its economy in the late eighties, foreigners showed up with more cash in their pockets than a Vietnamese farmer made in an entire year. Families converted the bottom floors of their homes into places catering to tourists. Since then, the business model of Bui Vien hasn’t changed much—just brighter signs and different owners.

It’s when the sun goes down that Bui Vien comes to life, though. 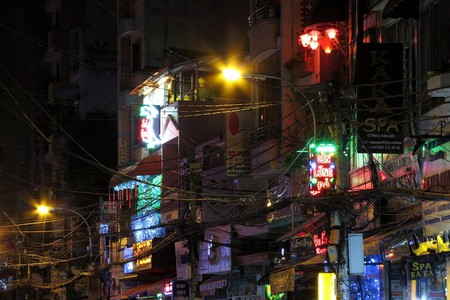 Nothing can compare to walking down Bui Vien around midnight in the middle of peak tourism season—dozens of shops hiding behind metal security gates, crowds in tiny plastic chairs on the sidewalks, and music vibrating your organs with overlapping beats from all the pubs, bars and clubs lining the street. Below you, strewn garbage and filth. Above, an orange sky and schizoid power lines. There’s a weird kind of nervous energy to the scene, like everyone knows something violent could erupt any second. Bui Vien feels like a powder keg, full of people either about to unleash some primal desire, or those who stand to profit from the transaction. Bui Vien is first and foremost an industry that feeds off money, and as far as the locals are concerned, addicts and perverts have money as well.

Some of the faces on Bui Vien are regulars—junkies, dopes, prostitutes, sloppy drunks, hardened criminals, cynical expats, skittish dealers and perverts of all sorts. There’s no mistaking Bui Vien’s underworld aura. Petty criminals roam the area in search of electronics and other easy grabs. Drug dealers with raspy voices basically fall over themselves to read their menus to foreigners. Girls line the street, hoping to lure people into dubious massage parlors. Disputes over turf happen all the time. It’s normal to see trained fighters whack each other while crowds of skeletal underlings toss around bottles and chairs and tables.

Despite all the glaring drawbacks of Bui Vien, it continues to thrive. Most visitors arrive through some combination of curiosity and proximity, and even though a majority of people rightfully despise Bui Vien and all it stands for, their stories attract hundreds of new visitors every day, checking in to see what the fuss is all about. 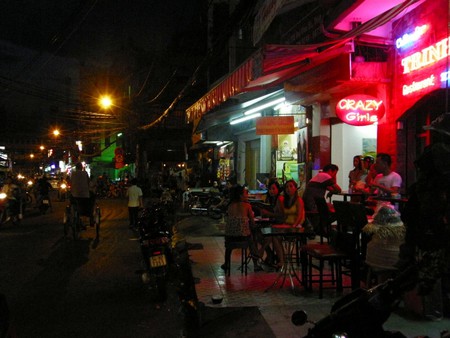 After hours on Bui Vien | © 兵庫胡志明倶楽部/WikiCommons

The only constant is change

Bui Vien is reality TV without any producers or censors. It’s unabashedly real in the most unreal way possible. But, like everything does in due time, Bui Vien is changing. Every year brings new fluorescent convenience stores and garish beer clubs pushing out the old scene that made the street famous. As Vietnam’s market economy matures, companies and officials will eventually purge anything that even hints of risk. Bui Vien is ugly and dangerous—but it wouldn’t be famous if it was any other way.

Khao San Road in Bangkok is a road map for Bui Vien. These days, Khao San Road is a false advertisement—a reputation that no longer matches its reality. Too many naive tourists got cuffed and extorted, so the illusion died a slow and weird death. Just as Khoa San Road went from an exotic adult playground to a gaudy tourist trap, so too will Bui Vien. The only advantage that Bui Vien has at the moment is that the people who’ve sworn oaths and allegiances get paid more to keep the status quo than they do to enforce laws.

There’s no place like Bui Vien anywhere else in the world, and probably for good reason. Here are a few tips to keep you out of trouble: