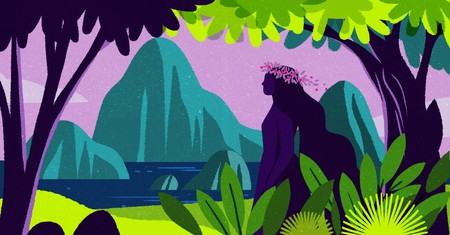 Vietnam is a haven for history buffs, travelers, and cultural enthusiasts alike. With a deep history that goes back thousands of years, Vietnam’s legends are unparalleled. Weaving strong lessons in morality together with enchanting mythical stories, one of the most well-known tales is about the origin of the Vietnamese people.

Legend has it that all Vietnamese people are the descendants of a dragon and a fairy.

Lạc Long Quân, or “Dragon Lord of Lac,” is believed to be the father of all Vietnamese people. The mother, Âu Cơ , is said to come from a family of beautiful mountain fairies.

While there are several different stories regarding how Lạc Long Quân and Âu Cơ met, one appears to be the favoured tale. Lạc Long Quân was beloved by the Vietnamese people and conquered various mythological beasts, such as the dreaded Ho Tinh, saving villagers from the monsters’ wrath and carving a name for himself as a hero along the way. One day during his travels, he came across an enormous bird preying upon an innocent white crane. Quan immediately took action and bravely slayed the monster, saving the crane’s life. Little did Quân know, the crane was actuallyÂu Cơ.

Fairy goddess Âu Cơ traveled around ancient Vietnam healing sick villagers, as she was skilled in medicine and wanted to help people. One day, a monster frightened her, so she transformed into a bird to try to fly away. While escaping, she realized someone had killed the beast. Âu Cơ , of course, fell in love with Quân after his heroic actions saved her life. Âu Cơ and Quan settled in land equal in distance between the mountains and the sea, where she gave birth to a sac containing 100 eggs. The eggs hatched into one hundred strong, smart children who quickly learned the ways of life from their magical parents. 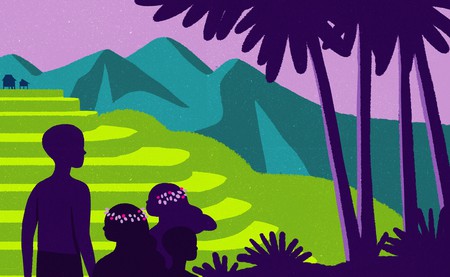 However, legend has it that Âu Cơ and Quân each grew forlorn, desperately wishing to return to their homelands. Âu Cơ wished to be at home in the mountains, and Quân in the sea. The story says that while they never stopped loving each other, they could not resist their desire to return to where they belonged. Instead, they decided to separate, promising to always support each other and be there if they ever needed a lending hand. Âu Cơ and Quân evenly split the children between the highlands and the ocean. The children who followed Âu Cơ to the mountains learned to live in the jungles, cultivate the land, and build houses on bamboo stilts to protect themselves from animals. Those who followed Quân to the sea became skilled fisherman and formed coastal villages throughout the country.

It’s no wonder the Vietnamese are proud to tell the magical tale of how they came to be. The story of Âu Cơ and Lạc Long Quân also serves as a metaphor for how the Vietnamese should always love and protect one another. No matter where they are from, whether it is the glorious mountains of Sapa or the stunning waters of Nha Trang, all Vietnamese people come from one origin: the enchanted union between a gentle mountain fairy and a powerful sea dragon.