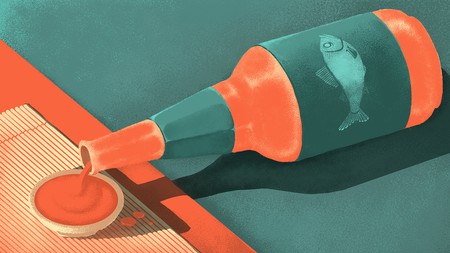 Before suspiciously turning your nose up at that bottle of fish sauce on the table, know that it is the secret ingredient to some of the world’s favourite Asian dishes. Here’s how smelly, fermented fish determined the tastebuds of an entire continent.

Few ingredients bring as much immediate, complex and delicious flavor to a dish as fish sauce does. It’s sweet, salty, fishy, and funky all at once. Without it, much of Asian cuisine wouldn’t exist as it does today. As both a long-preserved tradition and multimillion-dollar industry, the transformative power of fish sauce deserves its own love letter.

The history of fish sauce

Some may be surprised to know that the earliest version of fish sauce was recorded in Roman Italy. It can be traced back all the way to the 4th century, where it was called “garum”. Created from the likes of anchovies, sardines and mackerel, garum is very similar to the fish sauce that is so loved throughout Vietnam and other Southeast Asian countries. Garum was used in a variety of recipes and was a general substitute for salt and a base for sauces – just like it is now. To make it, the fish would be salted and left to ferment in the sun for several months until ready to consume. Remains of garum factories have been excavated in Europe and Northern Africa.

It wasn’t until about 1,000 years after it was documented in Italy, that fish sauce made its way over to Asia – likely through the trade route known as the Silk Road. In his book Salt, historian Mark Krasinsky argues that fish sauce in Asia developed independently of garum, though there are no official records confirming this theory.

How is fish sauce made?

Unsurprisingly, fish sauce derives most of its flavor from fish – but the real flavor comes from the process of fermenting this fish for anywhere from a couple months to a few years. Fermentation has been used for thousands of years to develop flavor in anything including meat, soy beans and other vegetables. For fish sauce, small, strong-tasting fish like anchovies are coated in salt and then placed into huge wooden vats, left under the sun for fermentation to begin. During this process, the fish are weighted down with bricks to prevent them from floating to the surface.

Natural bacteria starts to break down the fish, producing a briny, fishy, savoury liquid which is then drained and collected. This first batch is of the highest quality and called the “first press”.

Other companies take the first press and reintroduce it to the vat to continue the full fermentation process, which lasts long enough for it to reach concentration, but not long enough for taste-spoiling hydro-sulfuric acid to appear. The process normally lasts nine months to a year and results in a less concentrated, lighter and sometimes sweeter sauce. Some companies stop at the first press and sell these – Viet Huong is an example.

Many cultures around the world use or have historically been known for using fermented fish sauce, all the way from the Greek to the Chinese. In modern times, we most commonly associate it with Southeast Asian cooking.

In Thailand, it is called nam pla and in Myanmar it is known as ngan bya yay. The sauce provides one of the driving flavors in dishes like larb, Vietnamese marinated meats, green papaya salad, and stir-fries, as well as pad thai. Laos, Cambodia and the Philippines are also known to use it under other local names.

In Vietnam, where fish sauce is an incredibly popular tableside condiment and cooking ingredient, people refer it to as nước mấm. This is pure fish sauce and is consumed by 95 percent of Vietnamese households. It is used in marinades before cooking, as a seasoning during, or as a simple dipping sauce as you eat. For even more flavor, some like to add chilli pieces, lime juice, vinegar and sugar to the fish sauce, which results in a mixture called nước chấm.

Fish sauce is made all over Asia, but the best is said to come from two places in Vietnam: Phú Quốc island and Phan Thiết – mainly due to the quality of the fish, the sea salt used and the region’s perfect climate during fermentation.

Red Boat fish sauce from Phú Quốc is known as one of the best in the world, and comes at a premium price. Another well-known brand is Viet Huong, which is behind a number of popular labels including Three Crabs and Flying Lion. Liên Thành from Phan Thiết is another, having been around since 1906: they even have a vegetarian option, which is surprisingly not much different in taste.

If these trusted brands are unavailable when you’re on the lookout for some fish sauce to take home, steer clear of names that list preservatives in the ingredients. Another good indicator of quality is to look out for nitrogen content marked on the bottle as ‘degrees N,’ referring to the amount of nitrogen per litre. The amount of nitrogen denotes the quantity of protein in each drop — and the higher the protein, the more concentrated the liquid is. The industry standard is considered ‘30N’, while ‘40N’ is seen as high quality. Anything under ‘30N’ is viewed as low-grade.

Fish sauce also has a shelf life, generally about one to two years, largely depending on how that fish sauce was made. The salt acts as a preservative, so you can keep it at room temperature for up to two years once opened. However, if stored in the fridge, it will last longer. You should discard the bottle if it begins to smell rotten or if salt crystals or mould begins to form around the opening.

How to use fish sauce

Fish sauce has an earthy, savoury flavor field. It is salty and briny and there’s a distinct, pungent smell to the sauce as well. The boldness of the sauce pairs wonderfully with meat in marinades and glazes, giving the dish a complex flavor. Just a little fish sauce can also boost flavor in sautéed greens, pastas, and even broths. Fish sauce is able to give a depth of flavor that simple table salt can’t achieve. As a dipping sauce, it goes well with almost anything, from spring rolls to grilled meats.

Like most ingredients, test out the waters first and see if you can get used to the taste. Get that relationship going slowly – invite it to one dinner at a time. Experiment with different vegetables and meats. Once that sweet, salty, fishy flavor has you hooked, go all out.