A Journey Through The Street Food Scene In Saigon, Vietnam 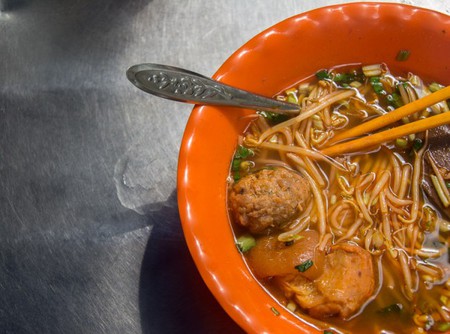 Ho Chi Minh City, still referred to as Saigon by many, is a southern Vietnamese city famous for its history, French colonial architecture, and mouthwatering street food. Guest writer Cara Taylor took to the streets to meet the women behind Saigon’s food stalls, accompanied by videographer Emily Jane Smith and photographer Zoe Shwidock. The result is an indulgent journey through Saigon’s exciting street food scene.

Recently, two friends and I traveled to Saigon, Vietnam. It had been less than 90 days since our last visit, and for us, it was clear that we returned for the street food. In Saigon, known by the rest of the world as Ho Chi Minh City, a walk down virtually any paved stretch of land is accompanied by the delicious scent of Vietnamese cuisine. Unable to resist temptation, it wasn’t long before we found ourselves sitting in colorful plastic chairs and eating meals unmatched in flavor and freshness.

During the entirety of our trip, we ate at one restaurant. We had developed an attachment to the sidewalks, and food-crawled our way through Saigon, but there was still more to be consumed. We wanted to find out how and why the women feeding us began making a living cooking food on exposed stoves. So, we set out on a journey to discover the story behind Saigon’s street food and met six women serving up Vietnamese classics. 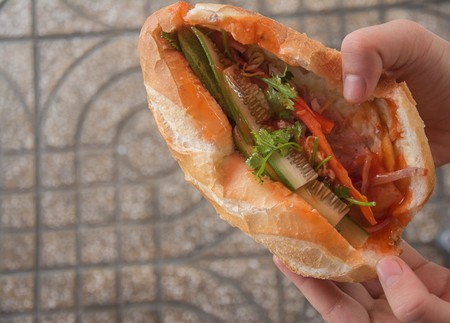 Ms. Xuan has been constructing bánh mì for 13 years. She told us this without pause, as she cracked an egg into a frying pan for our (vegetarian) bánh mì with op la (egg), cheese, butter, cilantro, cucumber and scorching chilies. The salty, spicy, fluffy, and crunchy flavors and textures of this sandwich created a tasty union between two complicatedly different cuisines.

Bánh mì, an addictive fusion of French and Vietnamese foods, is a served everywhere in Vietnam. Ms. Xuan learned to make it from friends years ago and, over the years, has had to adapt to the increasing pace of the city. Making bánh mì resulted of a necessity for her to provide for her family, but that doesn’t mean her job is without thrill. She has enjoyed maintaining a high level of skill and efficiency to her cooking and is proud to be keeping up with a group of consumers who want their food fast and delicious. 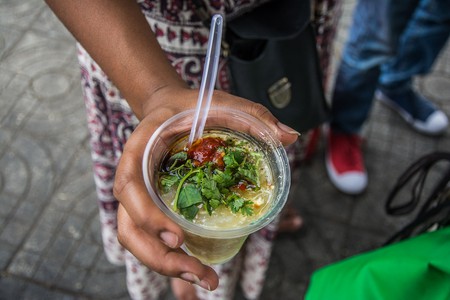 The next place that drew our attention was a food stall that sat just a couple of meters from Ms. Xuan’s bánh mì magic. The woman was Ms. Chè, who makes a dish called súp cua and a popular treat called chè kinh. We ordered the súp cua, a traditional chicken soup thickened with tapioca starch, mixed with crab, boiled quail eggs, and spices, and topped with cilantro and hot chili sauce. The thickness of the hot savory soup was comforting. The texture, coupled with the subtle bite of cilantro and red chilies, made clear why this rich soup was so popular.

Ms. Chè didn’t skip a beat as she packaged and served her food to a constant flow of customers. She did so with such ease because she’s been crafting it for 20 years and, in the last two decades, hasn’t changed the cooking methods taught to her by her sister. Ms. Chè remembers eating the same súp cua she serves today as a child. Years ago, she too began making street food for the sake of providing for her family, but today, the satisfaction of her customers is her favorite part of making súp cua on street corners. 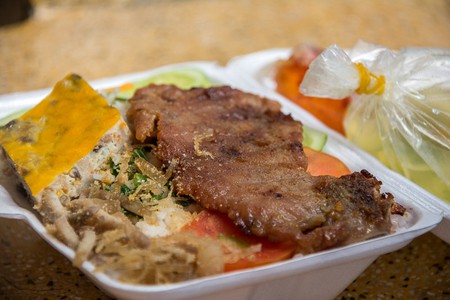 After the dense súp cua, we eventually ran into young Ms. Thank’s cơm tấm cart. Ms. Thank has been making cơm tấm for less than a year but has done well mastering the dish her mother taught her how to make. Cơm tấm is a plate of steamed rice topped with a flavorful barbecued pork, a creamy egg loaf (a modern addition), and a sliced cucumber salad.

The name of the dish means ‘broken rice,’ which refers to the fractured rice grains. Broken rice is less valuable, but today, Vietnamese people of ranging status prefer the fractured grains for their stickiness. This rice apparently pairs better with Vietnamese flavors than its fluffier superior.

The cơm tấm satisfied spicy, savory, and sweet cravings while marrying perfectly with the heartiness of the rice and pork. Much like the other women we met, Ms. Thank has been eating the food she makes since she was a kid and has taken note of how traditional it remains. She was a bit shy while we spoke, but told us with ease why she’s chosen to make cơm tấm: she just really likes to eat it. 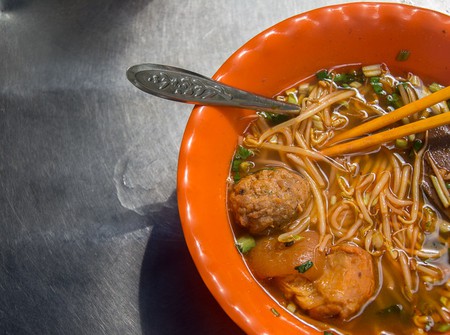 Next to Ms. Thank’s establishment sat an older woman. She was stirring a massive pot of bún riêu, a type of Vietnamese soup with a spicy tomato broth, vermicelli noodles, and pork. The vibrant collection of flavors is a testament to Vietnam’s ability to make soup better than any other country I’ve visited in my lifetime. It’s soup with a layered character, combining a tart and peppery base with fatty and hearty pork. As it stewed in a pot similar to her in size, she revealed to us just how seasoned she was in the art of soup making.

She’s been making bún riêu since she was in her 20s and was taught by her mother who once ran a food stall herself. She’s continued to cook all these years to provide for her family and, in the process, carry on the same practice as her late mother. Continuing the family tradition is a passion that she stirs into her food. As we talked, her daughter-in-law sat near us, eating the bún riêu that she’ll prepare for passersby when her mother-in-law retires. 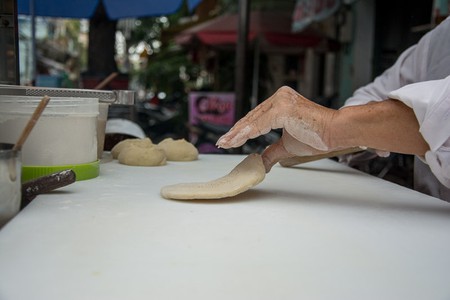 Around the corner and up a bustling street, we found Ms. Quyen’s little fried dough stand, and it was not one to pass. Bánh tiêu is a dense piece of fried dough topped with sesame seeds. It looks a bit like a sesame bun that you might find atop a burger patty, but it is not savory. This warm piece of dough is Vietnam’s slightly sweet, uncomplicated version of a donut – no raspberry mascarpone filling, no Himalayan salted caramel frosting, just hand-rolled dough, a bit of sugar, and a sprinkle of sesame seeds. This delicious Vietnamese classic has been served up (at an impressive speed) by Ms. Quyen for the better half of her life.

She shared a similar story to the other women we had spoken to. When asked what inspired her to make this particular food, she chuckled and said plainly that years ago, she needed to find a way to provide for her family and was taught to make bánh tiêu by friends. Over the years, she’s generally enjoyed making her living selling this simple dessert to strangers, but what matters most is that serving bánh tiêu allows her to provide for her family. 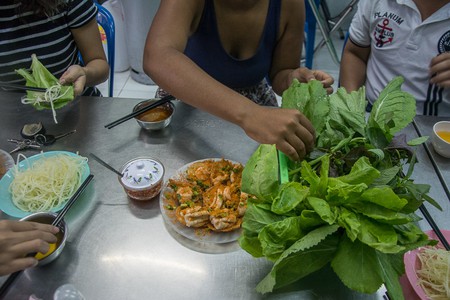 At the end of a nourishing day, we found ourselves eating in a foreign environment: a restaurant. Although we didn’t eat this last dish in the open air, it was just as satisfying and traditional. The woman who owns the place has been serving bánh khọt for 17 years and has always taken pride in serving this mouthwatering traditional food to her customers.

Bánh khọt is a seafood dish that originated in Vietnam’s Vũng Tàu Province. It’s a perfectly fried disc of dough topped with a medley of shrimp, squid, and shrimp powder, and then wrapped in lettuce and herbs. The owner of the bánh khọt restaurant has loved bánh khọt since childhood and believed it could be successful. She was right. Bánh khọt is something delicious.

The fresh, crunchy lettuce balances incredibly with the salty, oily dough and the bite of the spicy fish sauce you’re meant to dip it in. It is the kind of delicious that shifts the dining atmosphere, causing everyone to be speechless except for the periodic expletives shouted in disbelief of its goodness. Her restaurant is frequented by locals and travelers who often find it hard to leave without having had this kind of experience. It will remain my favorite Vietnamese dish until the next time I decide to food-tour my way through fantastic, flavorful Vietnam.