Quest Festival is one of the biggest parties in all of Vietnam, and for travellers fortunate enough to be in the Hanoi area in November, you can expect three days of camping, musicians, art, food, swimming, yoga, dancing and so much more. Here’s your guide to this unique festival.

What is Quest Festival?

Quest Festival started in 2013 when a few friends began looking for ways to grow the arts and culture scene in Hanoi. They came up with the idea of having a camping festival, because they had already been camping together and knew it was the kind of event that would scale well. It started with a few hundred people camping out together, but it quickly grew, attracting expats, travelers and locals from all around the region.

The festival itself focuses around art, culture and the environment, with various workshops, displays and musical genres. Each day is packed with events and presentations and group activities, along with sets played by musicians and DJs from around the world. Whatever your musical vibe, there’s a tent, stage or muddy dancefloor where you can join in the fun. And if you just want to sit in the sun and take the occasional dip in the lake, there’s plenty of time to do just that as well. The location, called Son Tinh Camp, is truly a paradise. 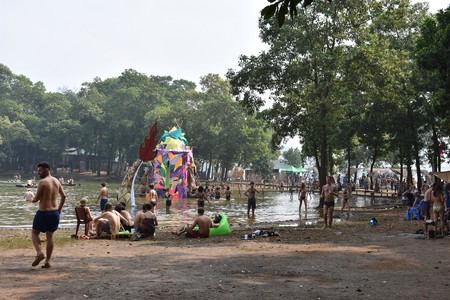 There are two main options for camping: bring your own gear and set up wherever (there’s a set area for people with their own gear, but the rules are fairly slack) or rent one of the many tents that the festival has set up already. For those who need gear, the festival also rents out pillows, foam pads and bedding. They also have different types of tents available. There are large shared tents, or three different sizes of private tents: single, double and large, which holds up to eight people. 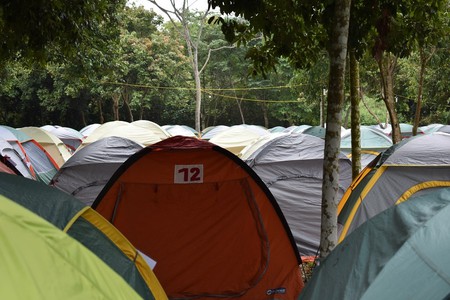 The festival uses smart bracelets for all payments. The staff give you a rugged bracelet with a chip inside and then you load money onto it by queuing at the pay station in the main building. It’s a bit annoying on the first day because everyone’s trying to load their bracelets at the same time, but after that, you’re glad to have it. It’s no fun carrying around fistfuls of cash as you stomp through puddles.

The food is mixed between festival vendors and stands, where popular restaurants from Hanoi sell their dishes. They have different cuisines and all kinds of excellent choices. The food situation at Quest Festival is excellent, and by the third day, you’ll need all the energy you can get. As for drinks, there are several bars spread throughout the festival area that serve both mixed drinks and decently-priced beer. For those of you with a taste for craft beer, there’s also a spot that sells quality brews.

The festival runs buses that leave at various times throughout the day, starting the morning of the first day. Bus tickets are one of the options when you buy your tickets online. Taxis are also a decent option, but a bit more expensive. Expect to pay about $4 USD each way for a bus ticket, and $12 USD each way for a taxi.

Aside from the bag check at the entrance, where they check for outside liquor, the security at the festival is fairly laidback. As long as you aren’t disturbing other people, they let you have your fun. With so many smiles and people out having a good time, the security is more of a precaution than a hindrance.

To find out the latest news about tickets, dates and performers, check out the Quest Festival website or their Facebook page. The dates change each year, but the festival is typically held in November. 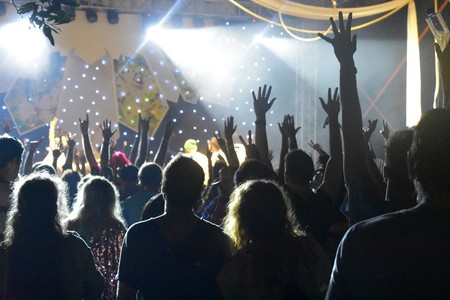 Hands in the air at Quest Festival, Vietnam | © Matthew Pike / Culture Trip
Give us feedback