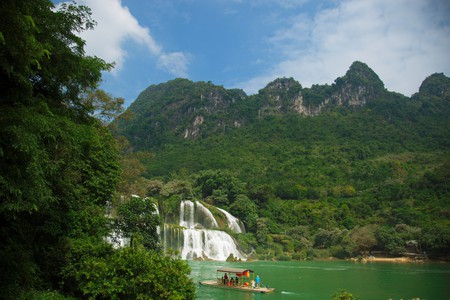 Hidden away in a seldom visited corner of northeast Vietnam, one of the country’s grandest waterfalls showers down through jungle-clad limestone walls. Ban Gioc Falls straddles the border with China, tumbling 100 feet from the Quây Sơn River to the rice paddies in the valley floor below.

Enter through the gift shop

When approaching the falls from the Vietnamese side, a well-maintained, paved road arcs along the hillside before sinking toward the river, providing excellent views along the way. Those arriving via motorbike can turn left down a sloping dirt track and park on the valley floor near the base of the falls for 10,000 VND, before purchasing entrance tickets at the kiosk for another 40,000.

A narrow, partially covered concrete path herds tourists through a 100 yards of gift shops and mediocre food stalls before opening up to the falls. It’s an amusing entrance-way, the sounds of crashing water are so close and glimpses can be had through slivers in the corrugated tin walls, yet it can’t be yours until you fulfill your tourist duties and peruse the last of the knickknacks. 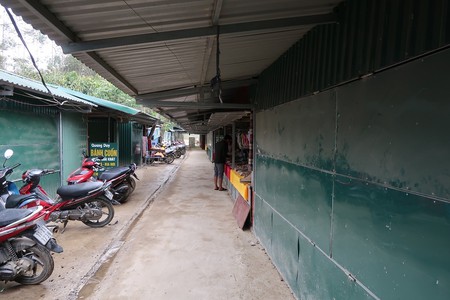 What makes Ban Gioc special isn’t the height of the falls, but the width. The river spouts out over open rock walls, it meanders through bamboo groves, and funnels between jungle thickets. The result is a uniquely diverse natural site spanning more than 300 meters across the Chinese-Vietnamese border. There are sections where the water batters over abrupt drops and others where it flows leisurely and softly, spraying out in a relaxing mist.

Along the Vietnamese side, elevated wooden pathways snake over running water, carrying tourists to the sandy beach beneath the impressive central section. Bamboo rafts slowly motor tourists into the spray for 100,000 VND more. To left of the main falls, the water flows through the overgrown jungle canopy before splashing out in romantic white ribbons.

Ban Gioc is popular with both Vietnamese and Chinese tourists, yet isn’t well-traveled by foreign visitors. It’s best visited during the week when the crowds die down and should be avoided during public holidays. 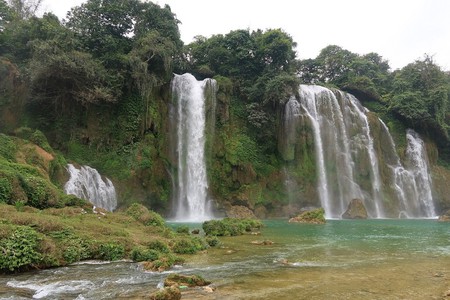 Slicing through the jungle | Sam Roth

Although today it’s generally understood that the river and thus the falls mark the dividing line between China and Vietnam, this has never been entirely agreed upon. Many Vietnamese hold firm to the idea that the falls in its entirety belongs to them. A stone marker placed on the southern side of the falls indicates the edge of Vietnam’s land; however, some believe this was moved during the war of 1979. 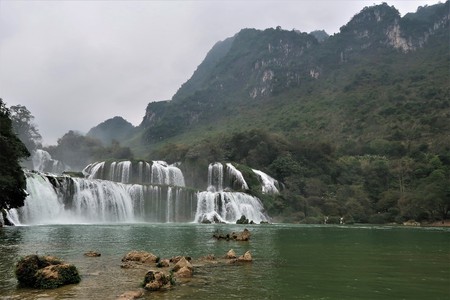 The view toward China | Sam Roth

Ban Gioc is most easily visited from Cao Bang City. Vans and tour buses leave daily and can be booked at most hostels, hotels or guesthouses. For those on a motorbike, the ride is beautiful, twisting through verdant valleys and over great karst passes. It can be completed in two hours and is easily done by taking the QL3 to the DT206.