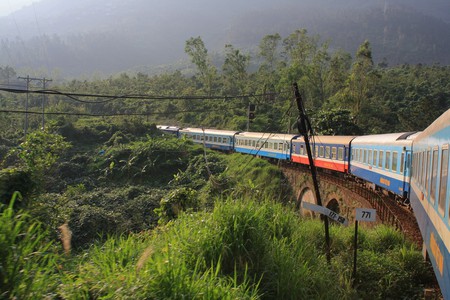 Slicing through the Vietnamese jungle | © plusgood/Flickr

The Reunification Express is a steel giant on 1,726kms of rusted tracks. It rumbles through rice paddies, fishing villages, dense jungles and even right through crowded neighbourhoods. Every so often a whistle blows, or the brakes let out a horrendous metallic shriek, but otherwise, it’s hour after hour of the same monotonous drumbeat — and amazing views. The Reunification Express rides along the spine of Vietnam, and it’s an integral part of the country’s history. Here’s how you can make it part of your travels.

All aboard the Informative Train

There is no single train called the Reunification Express. The term is used casually for any train on the North-South Railway Line between Hanoi and Ho Chi Minh City — all operated by Vietnam Railways. The line was originally finished in 1936 under French colonial rule. During the onslaught of war over the next 40 years, the line was damaged thousands of times. Then, after Saigon fell in 1975, the Hanoi government unleashed a massive engineering effort which made the line operational by the end of 1976. In less than two years, they’d repaired 1334 bridges, 27 tunnels, and 158 stations. Because of that impressive feat, this connection between Hanoi and Ho Chi Minh City became a symbol of a reunified Vietnam. 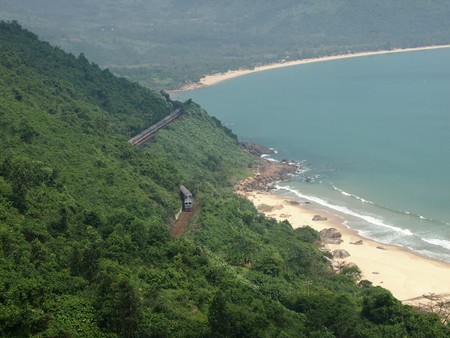 Should you take it?

Even though domestic flights are cheap and buses are easier for short trips, the Reunification Express remains popular among tourists because it’s a long exposure image of Vietnam — a 30-hour journey reminiscent of days gone by when travel took much longer than it does today. It’s also much safer than travelling by bus.

Convinced? Well, let’s get to the logistics then. 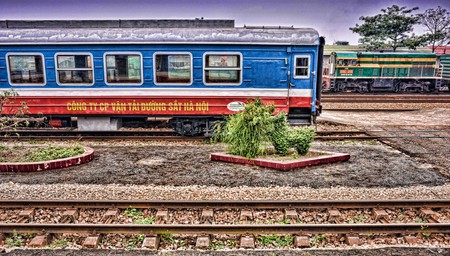 Fours trains leave every day from both Hanoi and Ho Chi Minh City. The South-North schedule can be found here. While the North-South schedule is here. Two in the morning, two at night. But, like many things in Vietnam, the schedule is more of a rough template than a precise calculation. 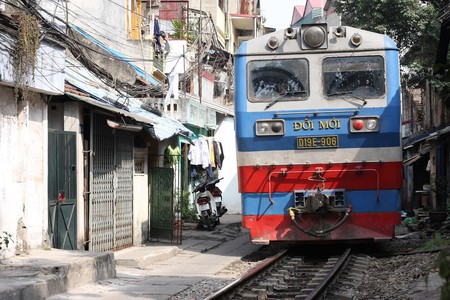 Where will you drop your caboose?

There are five different seating or sleeping options available to you. The cheapest is known as Hard Seat, which by its name tells you everything you need to know. It’s row after row of bare wooden benches. The next one is the Soft Seat, which looks exactly like bus seating. The chairs are plush, and overhead TVs play Vietnamese programming. Not a bad option if you’re on a tight budget, but you’ll probably end up on the verge of a breakdown if you’re a light sleeper. Also, some of the seats face each other. Do you really want to spend 30 hours avoiding eye contact with a stranger?

Next up we have the Hard Berth. These rooms have six beds with no padding, and as long as your roommates aren’t rowdy backpackers or chattering old Vietnamese ladies, you’ll at least be able to get some sleep. For a couple more dollars, you can get a Soft Berth ticket. The beds have cushions and you’re only sharing a room with three other people instead of five. If you’re travelling direct from Ho Chi Minh City to Hanoi, the difference between a Soft Berth and a Hard Berth ticket is only US$4.

To enjoy the best experience possible on the Reunification Express, get a VIP Cabin ticket. The rooms have two beds, so they’re perfect for couples. Book these tickets long in advance, though. 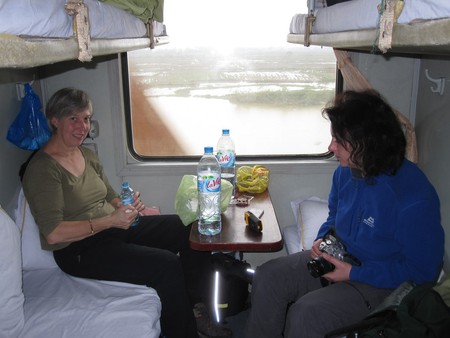 Tour guides and travel companies the length of the country will hound you with offers to buy your tickets for you. To save some money, do it yourself. Go here and buy your tickets online. You can pay through their website and then the tickets get emailed to you. If you go through anyone else, you’re paying a fee on top of the price. The fee usually isn’t much, but you should at least look at the prices beforehand so you don’t get scammed.

Children under the age of five travel for free. From five to nine years old, they pay 75% of what an adult would pay. Over ten and they pay the adult price.

You bring your luggage on the train with you. If you’re in a room with beds, the bags come into bed with you, or they can go under the bottom bunks. In the seating-only area, there are overhead racks to put your bags on. Adults are limited to 20kg, children to 10kg.

It’s not possible to buy a ticket with multiple stops, so you’ll have to buy a separate ticket every time you get off the train to explore a new area. That means if you want to stay in Danang for a couple of days as you’re travelling North, you’ll have to buy a ticket from Saigon to Danang and then another one for Danang to Hanoi. Seek out a reputable travel agency (always check them out online first) if you’re overwhelmed by their ticketing system.

You can bring your motorbike with you, but it needs its own ticket. Pets, unfortunately, aren’t allowed.

The Reunification Express is a fascinating experience. You rumble through Train Street in Hanoi, over the Hai Van Pass near Danang, and through endless fields of rice and dusty little towns made of faded cement. It adds character to your travels through Vietnam — and it gets you off the roads, which is reward enough. 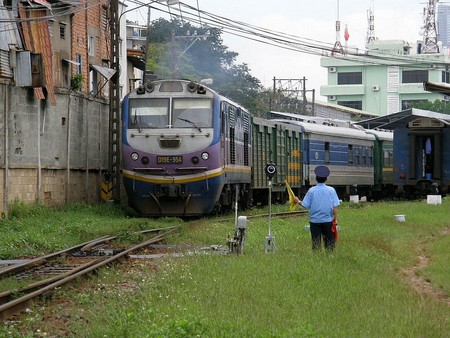 Rolling through Saigon | © 兵庫胡志明倶楽部/ WikiCommons
Give us feedback