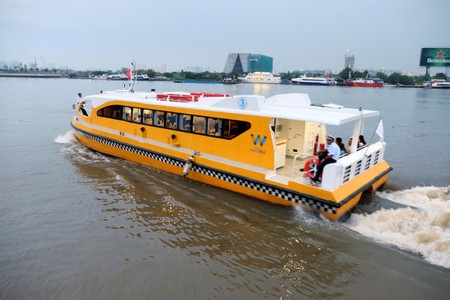 In an effort to ease Ho Chi Minh City’s horrendous traffic, the local government has permitted the Thuong Nhat Company to operate water taxis on the Saigon river, running boats between District 1 and District 9. Here’s everything you need to know to enjoy this wonderful new experience.

To start your trip, find the prominent statue of Tran Hung Dao crouched high on a pedestal in a roundabout in downtown District 1. Follow the outstretched arm of the statue and you’ll see the Bach Dang Pier, the starting point for the Saigon Waterbus. 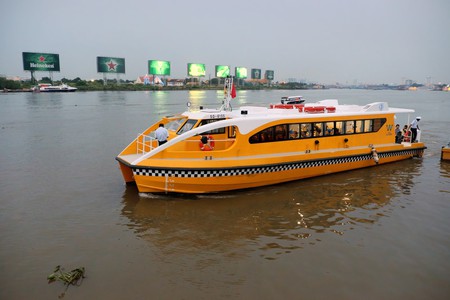 On the far bank, you’ll see where the commercial expanse of the city hopes to mount the skyscrapers of the future. But for now, there’s just huge billboards and jungle foliage. Within seconds, you’ll leave the glitz of the downtown and move along more industrialised sections of the river, lined with rusty barges, factories and shanties dangling over the murky, polluted water.

Around the first corner you’ll come to one of the more amazing urban sights in all of Southeast Asia: Vinhomes Central Park. It’s an ambitious new development that features Landmark 81, the tallest building in Vietnam. You’ll have to strain your neck to look all the way into the sky to get a good look at this awesome wall of buildings. Once you’re around this bend, the route cuts through the Thanh Da Canal to skip a big, looping section of the Saigon River.

The trip ends in District 9, north of the city. We recommend you pick up a return ticket to head back to District 1 – but if you don’t, a taxi ride back downtown will only cost about $10 USD. There isn’t really anything to do at the last stop, so don’t expect to get out and explore. 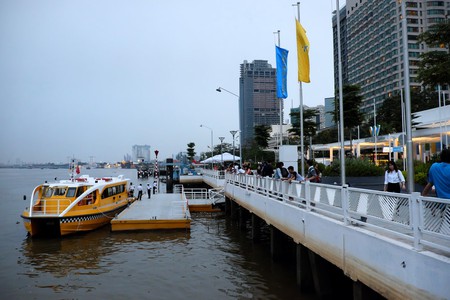 The whole 10.8km (6.7miles) trip from the Bach Dang Wharf in District 1 out to Thu Duc District, north of the downtown, takes approximately 45 minutes. They plan to add more stops in the future, but for now there are three – in Binh Thanh, District 2 and Thu Duc. Each of the 10 boats currently in operation can hold 60 people. Eventually, the company hopes to ferry 5,000 passengers a day. 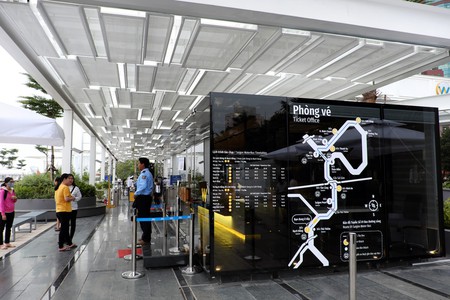 The schedule is here. To book tickets, call 1900636830 or send them a message on their Facebook page. Try to book in advance, because many of the tickets are reserved for commuters. And finally, here’s the route map.