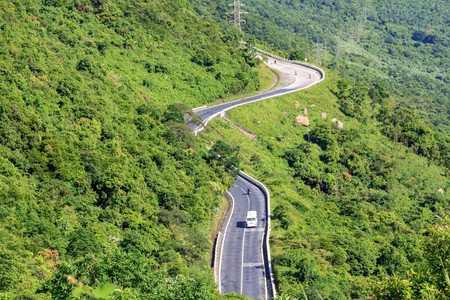 Just north of central Vietnam’s most populous city, as the asphalt plains turn to misty green giants, a serpentine of fun chiselled from stone coils into the clouds. In a country famed for motorbike travel, no singular route, road, loop or track has captured the hearts of the 21st century adventurer quite like the Hai Van Pass.

Danang is fast becoming one of Vietnam’s most sought-after travel destinations. The number of tourists, both foreign and domestic, visiting the seaside city of 1.3 million has soared in recent years. In terms of nature, it’s a pleasant alternative to Hanoi or Ho Chi Minh, cities which sprawl through industrial wastelands for miles before pollution finally gives way to farms, forests, or seas. Across Danang, dense mountain jungles loom over the flash of neon lights below. That ease of escape from the concrete has become a main draw for the city. It has also made it a mecca for those exploring the country on two wheels.

The most famous bridge in Danang | © Daderot/WikiCommons

Hanging over the East Sea, the Hai Van Pass twists and turns along the eastern edge of the Annamite Mountain Range. It can be reached from Danang by following the coast road, Đường Nguyễn Tất Thành, and then connecting to QL1A. From the spot that these two routes meet, continue north, crossing the Cu Đê River, until the road runs head on into the mountains. Bear right, out toward the sea, and begin the climb into the hills.

As the track bends into the sky, each switchback brings with it a new fantastic view over Danang and the East Sea. Along the way, there are a number of smaller dirt paths that break off and head down toward secluded beaches hidden beneath the canopy. Through it all, massive limestone boulders, broken away from the hillsides thousands of years ago, protrude from the jungle as it falls 1,500 feet to the sea below.

The road snakes back over itself in one final 180-degree hairpin bend before reaching the souvenir shops and cafes at its highest point. There are a number of historical monuments that can be explored on foot from here and the views, both north and south, are splendid.

Heading down the northern side of the pass, the road stretches out in front, gripping the mountainside. The Lang Co lagoon emerges behind the jungle and long sand beaches arch into the sea before melting into the last of the Annamite’s on the horizon.

The entire ride could be completed in 30 minutes, but with so many scenic viewpoints, it’s best to give yourself a few hours at the very least. 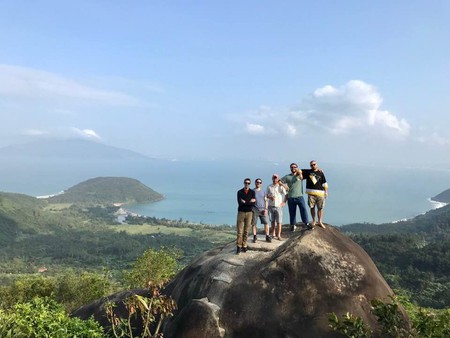 The view from the pass | Courtesy of Patrick Mara

When Jeremy Clarkson declared the Hai Van Pass “a deserted ribbon of perfection – one of the best coast roads in the world,” he changed the face of tourism in Vietnam forever. And while it’s impossible to quantify the effect that the Top Gear: Vietnam Special had on the region, it would not be a stretch to suggest that it helped spawn an industry — motorbike tourism.

Every day backpackers set out from Hanoi or Saigon on cross-country road trips inspired by the program. Signs advertising the Top Gear Special hang in motorbike shops, hostels, and Western cafes all along the coast. Giant groups of pillion-riding, awe-struck Westerners gawk at the East Sea from above. Perhaps the beauty of the pass alone would have eventually made it what it is today. Perhaps not. Either way, it’s undeniable that the cast of Top Gear are in no small part responsible for the popularity of one of Vietnam’s most scenic roads.