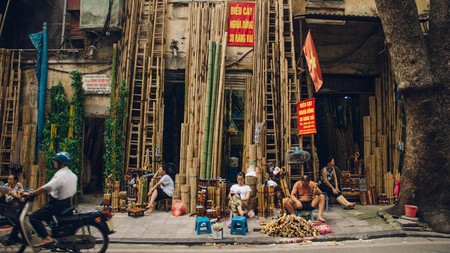 Hang Vai, or Bamboo Street, is one of the shopping streets in Hanoi where you can pick up handcrafted items | © Pocock / Culture Trip

The Old Quarter of Hanoi is home to an array of shopping streets, each one dedicated to a different trade. While some have lost their traditional craft to modern tourism, there are still plenty to explore in the ancient Vietnamese capital. Prepare to shop until you drop, as Hannah Stephenson guides us through Hanoi’s finest retail streets.

The narrow streets of Hanoi’s Old Quarter are a visual feast. Known locally as the ‘36 streets’, many of them date back hundreds of years. With criss-crossing alleyways, flurries of mopeds and tangled power lines, there’s plenty to contend with. However, as you adjust to the chaos, you may notice that many streets are dedicated to a particular craft.

The reason for this dates all the way back to 1010, when Emperor Ly Thai To named Hanoi as the capital of Vietnam and moved his royal company there. Many tradesmen followed the aristocracy and formed guilds in order to protect their own interests in the new capital. Each guild claimed a different street as its own, thus forming the central quarter of Hanoi.

Over the years, much has changed in Hanoi, and several of these streets have disappeared to make way for stalls that offer the counterfeit designer items and fruit-patterned shirts of which tourists seem so fond. However, many others have stayed true to their original trade and remain a great place to pick up some unique items in Hanoi.

Whether you want handcrafted leather shoes or knock-off sneakers, you’ll be able to find them somewhere on Hang Dau, aka Shoe Street. It’s a true bazaar of footwear with every style available. That being said, sizes do run small, so expect to be turned away by vendors if you have large feet – and don’t expect them to be particularly tactful in their rejection. 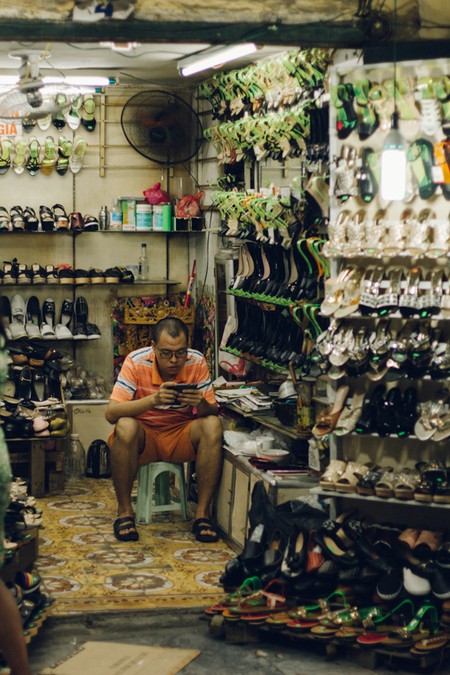 With its colourful lanterns, streamers and toys, Hang Ma is definitely a contender for the prettiest street in Hanoi. Hang Ma is a one-stop street when it comes to all manner of goods relating to celebrations and festivals. From joss paper to elaborate fish-shaped lanterns and Chinese zodiac masks, this street is a true bazaar of festive goods. Even if you don’t require any votive offerings at present, Hang Ma is always a charming, energetic and brightly coloured treat for the senses. 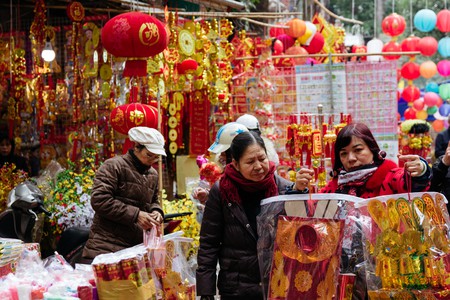 All that glitters is not gold but silver along this popular shopping street. It was one of the later trade streets to be established in the Old Quarter, but Hanoi’s silver industry dates back to the 15th century when King Le Thanh Ton decided to open a silver foundry. He gathered the finest craftsmen from nearby provinces and established a guild in the Thang Long Citadel. In the 19th century, the Nguyen dynasty named Hue as the new capital of Vietnam and moved most of the guild there. Not everybody was keen to move however, and the craftsmen who stayed behind established their own trade street in the city centre, where it remains to this day. 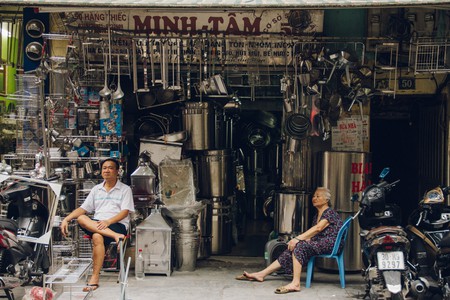 Nowadays, many of the wares on Hang Bac street are made using modern machinery, but it is possible to find handcrafted items. Several fashion boutiques and fine art galleries have also opened up along Hang Bac, making it one of the most upscale of the 36 streets.

Originally, Hang Vai was mainly occupied by textile traders, but Hanoi’s bamboo guild moved into the area somewhere around the 19th century. Bundles of bamboo are propped against every available surface, and there are many shops selling handcrafted bamboo gifts and trinkets. 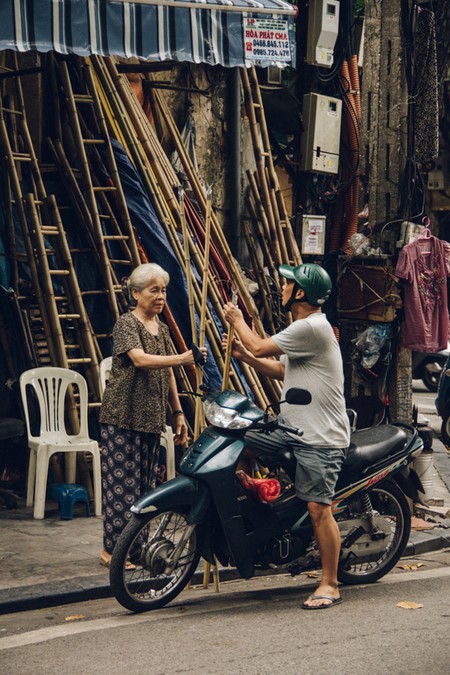 The street is also home to many nuoc mia stands, where you can get a cup of freshly pressed sugarcane juice for around £0.40. Your dentist won’t thank you, but it’s the perfect antidote to the Hanoi heat.

Sugar, spice and everything nice can be found along Hang Duong, aka Sugar Street. It feels something akin to an old-fashioned sweet shop crossed with a marketplace. There are dozens of stores and stands selling traditional goodies by weight, such as dried fruit and spiced candies. It’s a great place to learn more about the sweeter side of the Vietnamese diet and, of course, sample a little bit of everything. 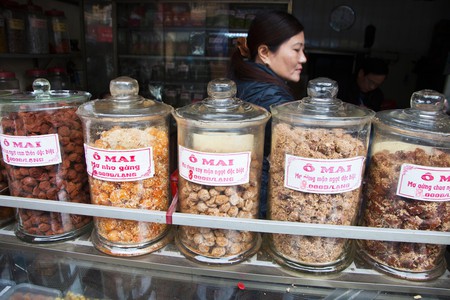 Hang Duong street is always a popular destination for sweet-toothed Hanoians, but it becomes especially busy during certain times of the year, such as the Tết holiday and the mid-autumn festival, when residents stock up on treats and traditional mooncakes to share with their families.

Lan Ong is one of the few Old Quarter streets whose name doesn’t directly pertain to its trade. Lan Ong actually means ‘Lazy Old Man’ in Vietnamese, which was the nickname of 18th-century physician Le Huu Trac. He wrote many books and was well-known in the field of traditional Chinese medicine, so it’s fitting that Hanoi’s herbal street should be named after him.

Thanks to the array of herbs and spices on sale, Lan Ong might just be one of the most fragrant streets in the entire city. As well as an enormous variety of herbal remedies, there are also physicians on this street who perform holistic diagnoses. Be aware that these techniques and treatments are passed down through the generations rather than learned at medical school. 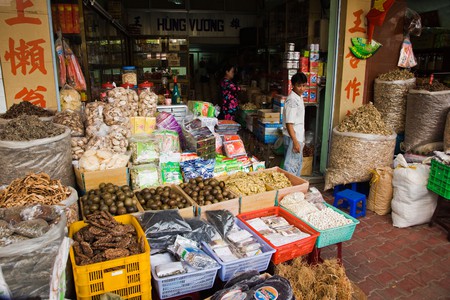 Lan Ong, which translates to ‘Lazy Old Man’, is named after an 18th-century physician who was a well-known Chinese herbalist | © Anders Blomqvist / Alamy Stock Photo

Since Lan Ong is the street for cures and remedies, it should perhaps not come as a surprise that it’s also known for its excellent pho ga, or chicken noodle soup.

While Hanoi grows ever-more modern, Hang Gai retains an old-world feel with its wooden shop fronts and traditional lanterns. It’s the best place to buy silk in Hanoi, with a multitude of tailors and boutiques that are renowned for their high-quality goods. There’s also artwork and accessories crafted by some of Vietnam’s 54 ethnic groups on sale, such as prints, slippers and handbags.