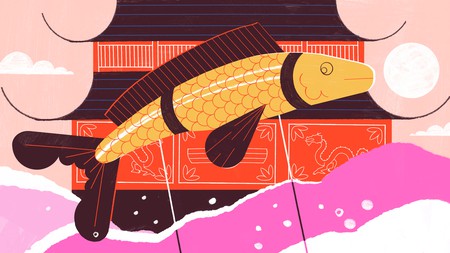 Vietnam’s capital city Hanoi is steeped in tradition and history. One of the most interesting and unusual attractions is at Thang Long Municipal Theatre, where visitors can watch the ancient art of water puppetry at one of the legendary shows. Kim Gregory tells us why this spellbinding spectacle is a Vietnamese tradition not to be missed.

As drums roll and cymbals clash, dragons dance across water with fire sparking from their mouths. A tiny wooden man rides a bull across a smoking river and dances in sync with fairies and animals. Against the backdrop of the beautiful Asian pagoda, there’s singing, cheering and warnings shouted in Vietnamese from members of the band. It’s another night in Hanoi’s Thang Long Water Puppet Theatre, and it’s as weird and wonderful as it sounds. 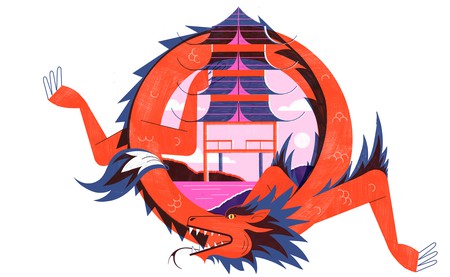 The history of water puppetry

Water puppetry – known in Vietnam as Múa rối nước, meaning ‘making puppets dance on water’ – is a Vietnamese tradition steeped in history, folklore and mystery. To this day, when visitors to Hanoi flock to the main theatre to experience the unusual art, it isn’t known how the little figures are mastered so seamlessly by hidden puppeteers.

The art dates back to the 11th century on the Red River Delta in northern Vietnam, when rice farmers began to craft their puppets and create shows to entertain their family and locals once the difficult harvest season had finished. They also believed the shows kept the naughty spirits distracted from any mischief making, which could harm their crops.

The farmers built pagodas above their rice paddies and held community festival shows there to show off their creations and well-practised puppeteering skills. It’s thought that the water aspect came in when large floods hit the rice paddies at Red River Delta and farmers adapted their conventional puppetry, operating the wooden figures from waist-deep water. Thus, the liquid stage – which hides the puppeteers, helps with acoustics and gives the show a mystical shimmer – was born.

Khoi Nguyen, Hanoi local and founder of Instagram’s @Hanoicapital, says: “The puppetry reflects the culture of ancient Vietnamese, which is mainly agriculture, because the original story of water puppetry comes from Vietnamese farmers.”

From the early days, farmers took the art very seriously and kept the secret of how to control the puppets tight within their family. They passed skills down generations – but only to sons, for fear that daughters would marry outside of the village and reveal their magic formula. Even now, puppeteers have to train for three years before they can perform and methods can still remain a family secret.

Besides the wonderful show itself, it’s this mystery that now draws the thousands of Hanoi tourists every year into the theatre. Nguyen continues: “Today modern Vietnam has become a very fast developing country filled with technology, big changes and fast moving lifestyle, however the symbol of agriculture never disappeared, and water puppetry remains a cultural symbol and traditional entertainment, so it can be seen as something Vietnamese people are proud of.”

As you watch the puppets skim across water, perfectly in sync and sometimes even passing objects between one another, it’s impossible to understand how the talented artists work their magic from behind the pagoda screen, their hands beneath the murky, mudded waters. 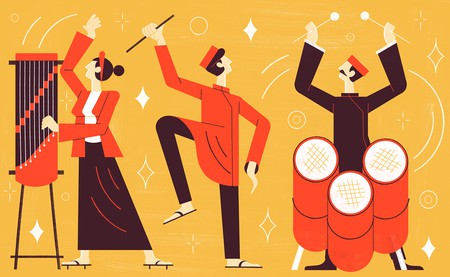 Over the past 1,000 years, the traditional art of water puppetry has evolved. Nowadays, the shows are always accompanied by a Vietnamese orchestra, weaving beautiful music from the likes of bamboo flutes, horns, drums, wooden bells and string guitars. It’s even typical for the musicians to break off and shout words of warning to the puppets, if danger lies ahead.

Often, singers of chèo, Vietnamese opera, belt out beautiful songs that tell the stories being acted out. There’s fireworks, colourful lights and even dry-ice rolling out over the water to create even more mystery.

But while the addition of fancy lighting and pyrotechnics is a change from the original spectacle on the rice paddies, the traditions remain. The stories told are based on folklore and legends of the country, or even just typical rural life from those original days. There’s fishing, festivals and harvesting of rice. There are tales passed through Vietnamese generations – the boy riding a buffalo, the fire-breathing dragons and the Legend of the Restored Sword of King Le. You’ll spot Chú Tễu (Uncle Teu), a classic jester character that opens the show, as well as frogs, fish, turtles and fairies. They float and dance under the temple-like stage adorned with flags for festival flair, sharing their stories of love and laughter for a delighted audience.

Of course, the show is entirely in Vietnamese, meaning Western audiences often cannot fully follow the storylines. But the beauty of the puppets, the mystery of the masters and the feeling of celebrating a long-lasting, proud tradition is all the entertainment you’ll need.

The attraction has even created a livelihood for the families who started all this, with some Northern Vietnamese villages creating and selling water puppets for the shows. 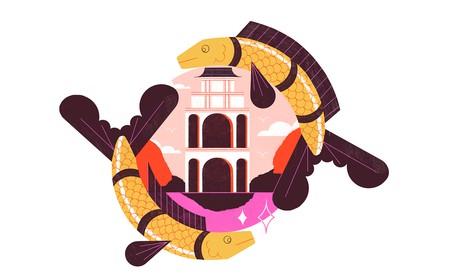 Catch the weird and wonderful show yourself at the Thang Long Water Puppet Theatre. It opened in 1969 and has been the most famous establishment since, though shows are available in smaller venues and some are still going strong in rural villages.

Thang Long Theatre is near the famous Hoan Kiem Lake – a ten minute taxi ride or 25-minute walk from Hanoi’s main station. The shows are on every day of the year, several times a day from 3.30pm onwards or 9.30am on Sundays.

It’s possible to book online and although last minute tickets are often available on the door, they’re usually seated at the back. The puppets are quite small, so booking early and paying a little extra to sit near the front will give you the best experience. Be warned, front-rowers may get soaked by the pesky dragons. Tickets cost between 60,000 – 100,000 VND (£2-3.30).

To round off a perfect day, sit in the theatre’s cafe overlooking the beautiful Hoan Kiem Lake. Grab yourself a staple Vietnamese coffee and contemplate the centuries of rural family traditions that brought you the unique spectacle of the wonderful water puppet theatre show. As Nguyen concludes: “Every show here receives lots of love and great feedback, contributing to the income of Vietnam tourism, so we would say water puppetry is an important part of our culture, tourism, and a symbol for not only the Vietnamese but also the international audience.”