Crazy Things to Do in Vietnam Before You're 30 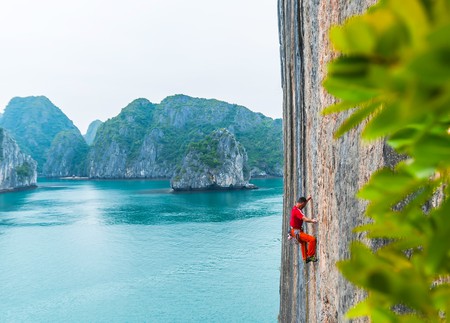 True, Vietnam might not be the first place you think of for extreme sports and wild activities, but it is a country of thrills and spills – whatever your bag. Here are the wild things you should do here before you hit 30.

Fancy revving up a motorbike and touring the Hai Van Pass? The road is yours. In the mood for a party? Simply board a boat tour with DJs at Ha Long Bay. Da Lat is a canyon-lover’s dream, while the streets of Bia Hoi Corner are giddy whirls of late-night drinking and dining. You might sample deep-fried insects in the Mekong Delta, or if that’s not to your taste, you’ll find the street-food markets have an abundance of delicious dishes. 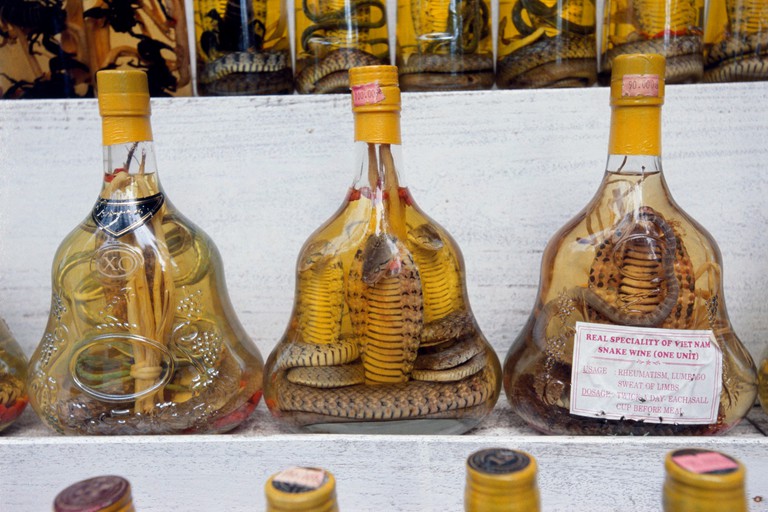 The Vietnamese will tell you that snake wine – typically cobras soaked in rice wine – improves virility, baldness, myopia and any number of other ailments. You can try it at the stalls of Hoi An Night Market. But as bottles are traditionally brought out at the end of an evening (in all-male company when everyone’s roaring drunk), downing a shot is more a test of perceived virility than a tonic for improving it. And don’t worry about the venom – the potent alcohol destroys it.

Drive the length of the country on a motorbike 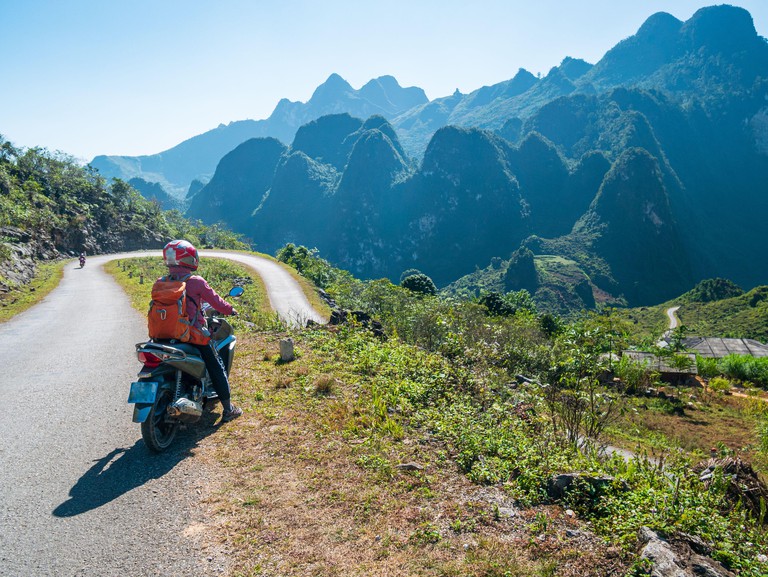 In Vietnam, motorcycles are everywhere – even on the pavements. So what better way to see the country than on two wheels? Try flitting from village to village, winding round the hairpin mountain roads in Ha Giang and over the imposing Hai Van Pass, stopping at empty beaches along the way. They’re easy (and cheap) to buy in Hanoi or Ho Chi Minh City; just make sure you get them checked by an independent mechanic first and drive defensively – accidents rates are high.

Board a party boat in Ha Long Bay 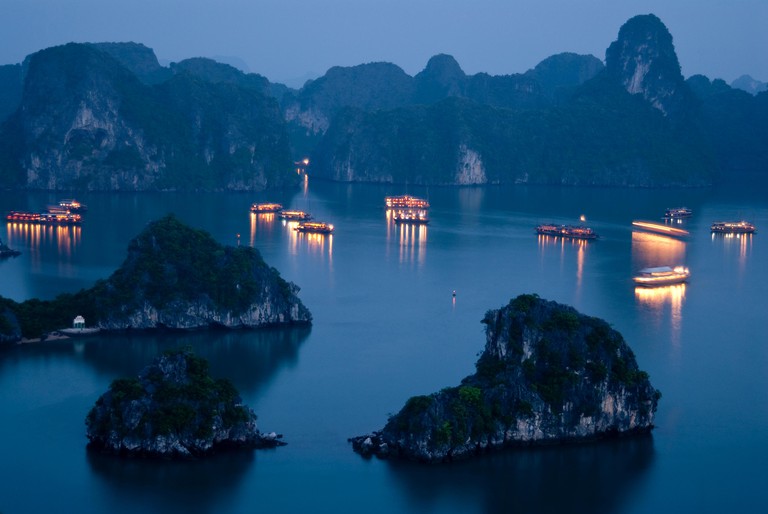 Calm sea, turquoise water, limestone karsts covered in rainforest – Ha Long Bay looks like a still from the film Avatar (2009). Most visitors roll up to absorb the tranquillity, but partying is an option too: the Oasis Bay Cruise is a three-day Ha Long Bay boat trip with hot tubs, inflatable trampolines, kayaks, and DJs who play thumping music from nightfall to early morning (they don’t scrimp on the drinks, either). Do it at the start of your Vietnam trip and you’ll have new friends for the duration.

Ho Chi Minh City isn’t by the sea, but that doesn’t mean that you can’t slip on a swimsuit: one of the biggest pool parties in Southeast Asia takes place every Saturday between November and June, near the Tao Dan Park in District 1. The pool is big enough for 600 revellers to dance and splash from dusk ‘til dawn. Drinks are cheap, there’s plenty of party food and if you’re exhausted you can collapse in one of the on-site cabañas or hotel rooms. 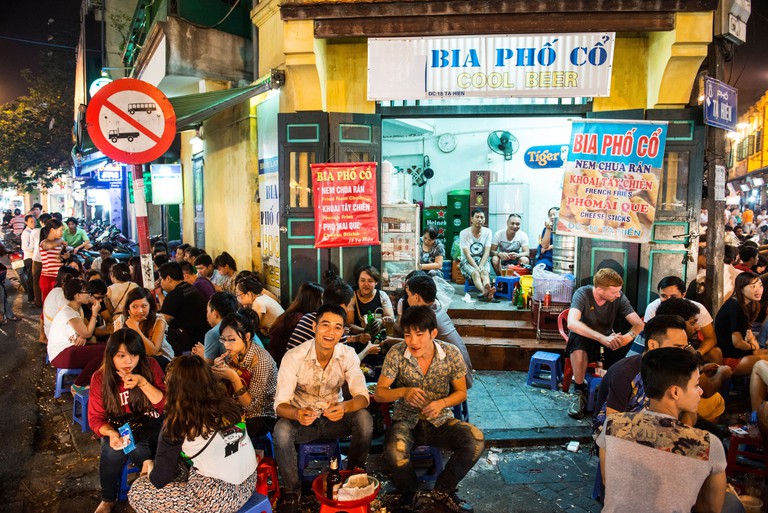 By day, the narrow streets of Old Hanoi are lined with market vendors. By night they reverberate with bars, especially around Bia Hoi Corner near the Cầu Chương Dương Bridge. Things get lively after 11pm, so grab a bite in one of the many restaurants (there are plenty on Đào Duy Từ – a block away) before joining the hordes of locals and tourists clustered around sidewalk tables, downing glasses of cheap local draught beer. 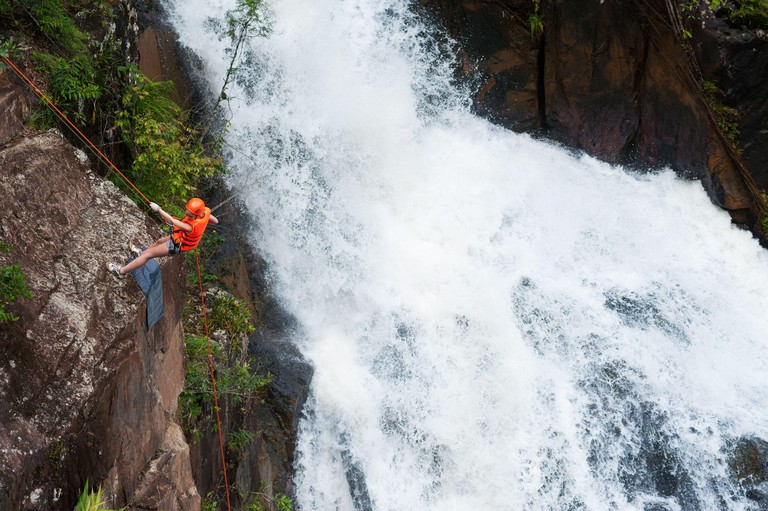 Steep gorges cut by rushing rivers, plunging waterfalls, dense jungle – Da Lat, in the lush forest-clad mountains of southeast Vietnam, is one of the best places for canyoning. Da Lat Canyoning Tours promises full immersion in the sport – and in the water – with difficulty graded from easy to moderate. On a day trip you’ll do water abseiling, zip line through the trees into icy pools, slide down rocks and swim in the rivers. Bring rough clothes, tough shoes and expect to get very, very wet. 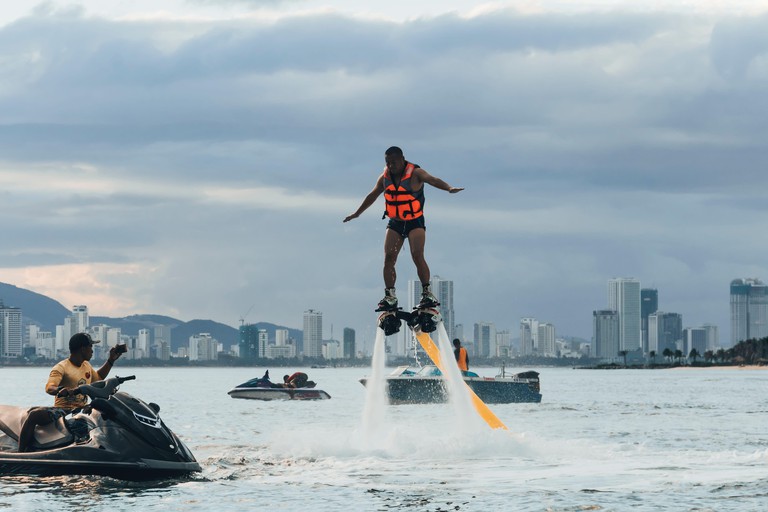 © Dmitrii Melnikov / Alamy Stock Photo
What is flyboarding? Picture soaring on jet boots, powered by high-pressure water pumped through a giant hose. The jets are so powerful you can hover up to 6m (20ft) into the air, or whizz speedily through the waves. Experienced fans even perform acrobatic stunts. Fly Board Nha Trang offers the sport to initiates, on the glassy sea off the main resort beach. Expect, too, jet-ski tours of the nearby coral islands and standard boat and snorkelling trips.

Eat scorpions at a roadside market in the Mekong Delta 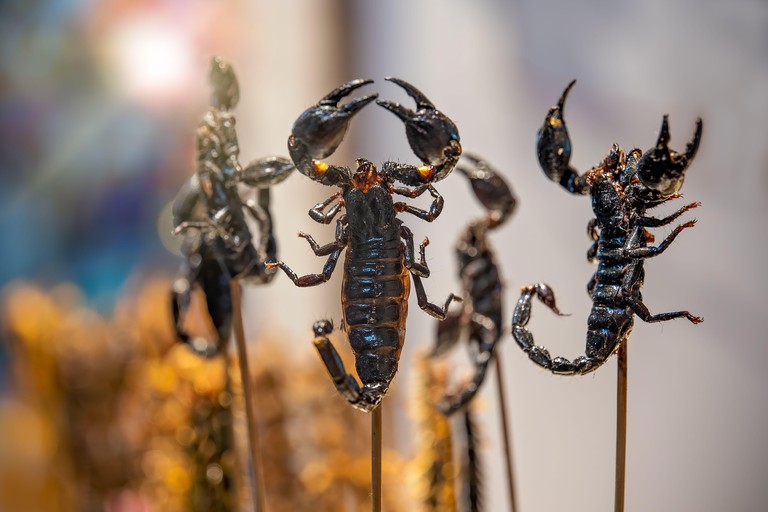 Drive through the back roads around Bay Nui in the Mekong Delta and you’ll see snack stalls heaped with water bugs, tarantulas, crickets and big black scorpions. People gather them from the forests in the nearby mountains then toast them with salt, barbecue them on a skewer or stir-fry them with lemon grass and chilli. What are they like? Crispy and bland on the outside, with a gooey centre that tastes vaguely like a fondant made of fish and singed hair.

Summit the tallest mountain in Indochina 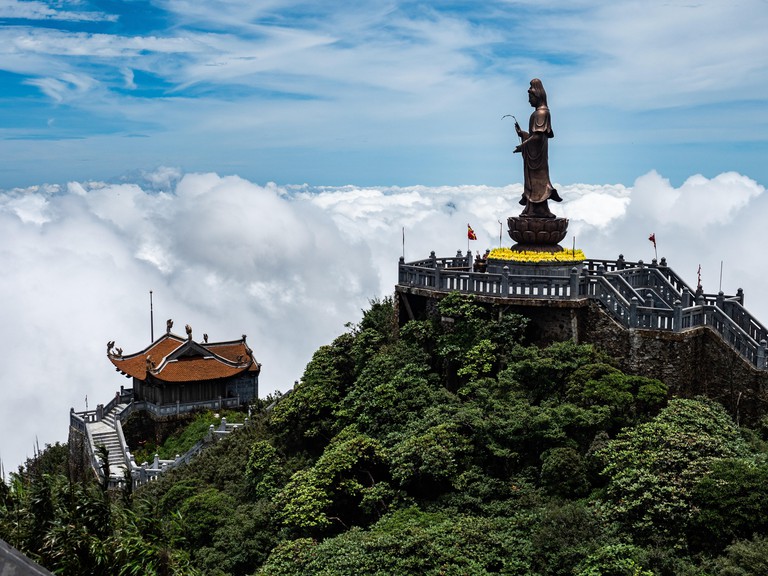 If you’ve seen pictures of terraced paddies and Hmong people, then you already know how beautiful the Muong Hoa Valley is. Fansipan Mountain looms over Sapa, a small city that’s becoming increasingly popular with tourists. It’s the tallest mountain in Indochina at 3,143m (10,312ft), and it’s no easy feat getting to the top. Most hikes to the summit are spread over several days. You ascend into the clouds through thick forests and some amazing nature. It’s not too crazy, but still something better done when you’re young and your knees can take the abuse.

Ride a four-wheeler over white dunes 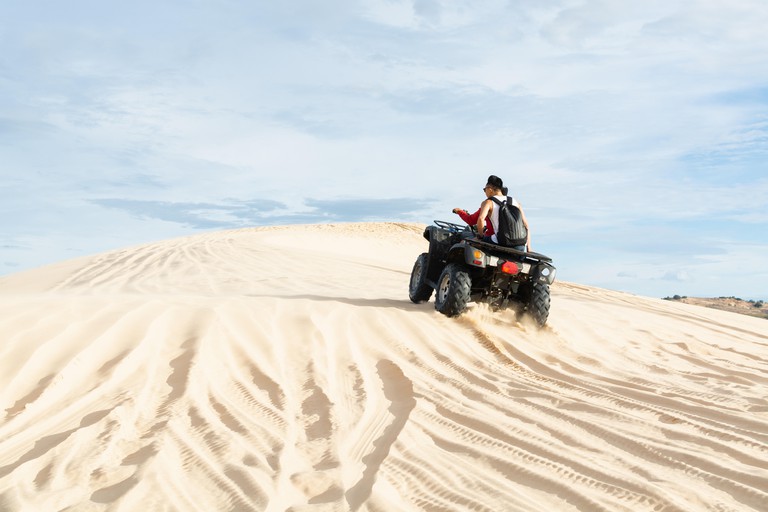 Even in a country as diverse as Vietnam, you don’t expect to see massive dunes squeezed between a fishing village and forest. It doesn’t compute. But as weird as they are, the dunes of Mui Ne are quite a sight. For the everyday traveller, it’s enough to hike around them for a couple of pictures, while the more adventurous might even race down one of the slopes on a crazy carpet – like sliding down a snowy hill in winter. But to really get the blood pumping, rent a four-wheeler and tear around the white dunes.