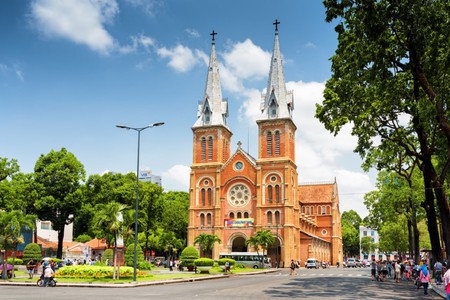 The crown jewel of French architecture in Vietnam | © Efired/shutterstock

From 1887 until the Geneva Accord of 1954, Vietnam was part of French Indochina, a colonial possession which also included Laos and Cambodia. Even now, more than 60 years later, it’s easy to find French influences throughout the region. Those years under French control brought on rapid change, forever leaving their mark on Vietnam—good and bad. Despite the efforts of the Vietnamese government to erase anything they perceived to be out of line with their image of a unified and independent Vietnam, French culture is too deeply ingrained. It’s part of the fabric of Vietnam now.

Many staple foods in Vietnam are French dishes modified to include local ingredients: omelets, baguettes, croissants and anything fried in butter. Certain ingredients—cauliflower, zucchini, pate and potatoes, among others—were introduced to Vietnam during the colonial years. Some dishes arose from the demands of French authorities and their families, while others came from Vietnamese cooks, incorporating their new ingredients. Much of what we know as distinctly Vietnamese cuisine has French influences. 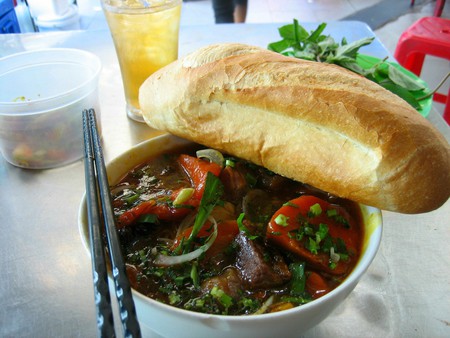 Cafe culture in Vietnam is as vibrant as anywhere else in the world—from opulent terraces to sidewalks littered with people chatting around fold-out aluminum tables. In the south especially, there are cafes everywhere. Vietnamese tend to wake early, and coffee is their daily fuel. It’s an integral part of life here, but it wasn’t always this way. Prior to the French, Vietnamese people shared their Chinese neighbors’ affinity for tea. Today, Vietnam is the second largest exporter of coffee in the world behind Brazil. Coffee isn’t just part of their culture; it’s also pivotal to their economy. 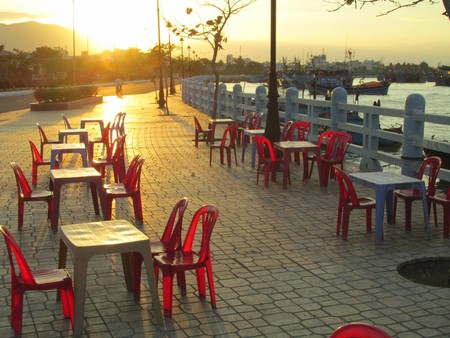 While China has undoubtedly had more influence over the Vietnamese language, anyone with even a rudimentary knowledge of French will hear familiar words in Vietnam. The words for cheese, neckties, butter, bread, father (pa), beer and many, many others are all phonetic copies of French words.

Besides sharing words, Vietnamese as you see it today only looks the way it does because French colonial authorities promoted the Romanized version created by Alexandre De Rhodes, a Jesuit missionary who also helped to bring about the next major cultural influence. 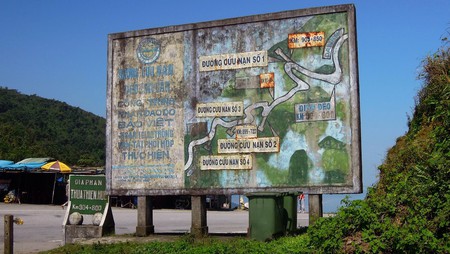 Sign at the top of the Hai Van Pass, north of Danang | © David McKelvey/Flickr

Catholics in Vietnam make up approximately seven percent of the population. Holidays like Easter and Christmas, while not nearly as widely celebrated as they are in the West, have their own Vietnamese traditions. It’s common to see people wearing a cross around their neck, and many families have an alter to Jesus in their home, near their ancestor shrine. Vietnam is officially atheistic, but the government doesn’t interfere with people practicing their faith these days. Also, some of the most famous buildings in Vietnam are churches. 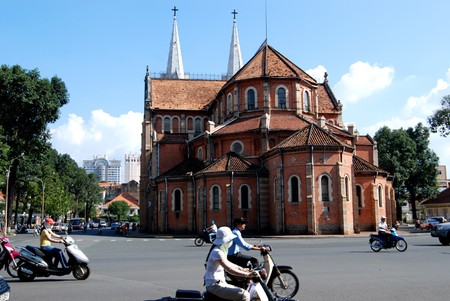 In certain cities—most notably Dalat, Ho Chi Minh City (Saigon) and Hanoi—there are still wonderful examples of French architecture, with their high arches, balconies, columns and pleasing symmetries. Some of the more remarkable buildings are the Hanoi Opera House, the Notre-Dame Cathedral Basilica of Saigon and the many colonial villas and mansions in the hills surrounding Dalat. Even today, rich Vietnamese still build villas with French architectural features, whereas government buildings tend to be more austere. 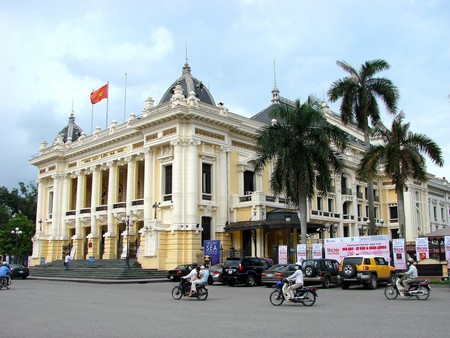 If it weren’t for the colonial French and their preference for Dalat’s cool mountain climate, this little city would be a very different place. For a time, it was the summer capital of French Indochina. The colonial authorities couldn’t handle the oppressive heat and rains of the lowlands, so they retreated to their villas and mansions around Dalat. Because of the unique climate, the colonial French also helped to make Dalat into an agricultural powerhouse. Many ingredients used throughout Vietnam can only grow around Dalat. 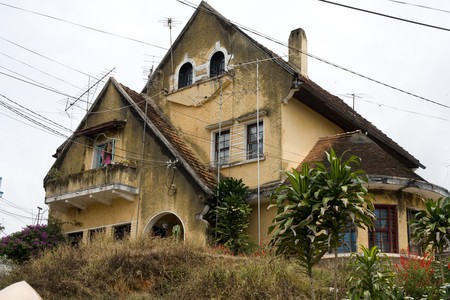 Elsewhere in Asia, bread isn’t as popular a dish—at least, nothing like it is in Vietnam. Here, millions of people eat banh mi sandwiches for breakfast every single day. Baguettes were introduced by the French, but Vietnamese use rice flour instead, for obvious reasons. The bread is more airy and porous, distinctly Vietnamese. Today, there are French-style bakeries throughout Vietnam, part of a resurgence of international culture making its way back into the country as it modernizes. 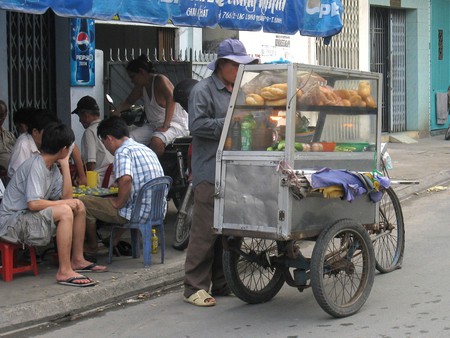 While the white suits of the early 20th century are gone, there are still other fashion influences that remain. The ao dai, a traditional Vietnamese outfit, is the best example. Prior to the French, the ao dai was more conservative—a flowing robe which didn’t accentuate the sexual parts of the body. The influx of French tailors, along with the tastes of the colonial rulers, changed the ao dai into what we know it as today: a voluptuous outfit which accentuates curves, made of thin silk. For men, the trousers and collared shirts, still popular among even workers, were first introduced by French tailors. Though now, American styles have taken over. 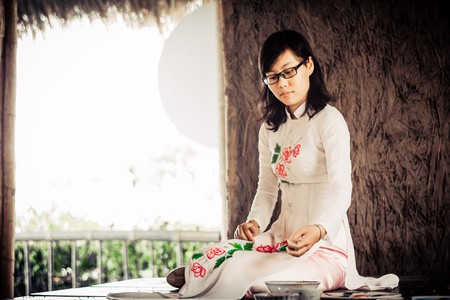 In the days before French Indochina, education was reserved for elites—for mandarins who served as bureaucrat scholars to the dynastic Nguyen emperors. Under the French, the education system became westernized. People could specialize, rather than studying broadly for the purpose of ruling. The French also introduced schooling up to the third grade—but not out of some sense of egalitarianism. They needed to train more clerks and assistants to handle the mundane duties of colonial rule. 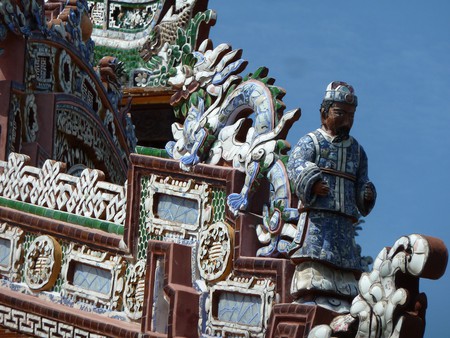 Decorative roof inside the Citadel in Hue, where the mandarins lived | © lightwrite/Flickr

The colonial French—behind their facetious notion of spreading civilization to their colonies—did leave behind modern infrastructure which Vietnam still uses to this day. The famous Reunification Express, the railway line between Hanoi and Ho Chi Minh City, was originally built under French rule. Many of the roads and bridges in Vietnam were also first built under French supervision. Probably the most famous example is the Long Biên Bridge in Hanoi—formerly the Paul Doumer Bridge. One unsung hero of French infrastructure is the sanitation system they left behind, especially in Ho Chi Minh City. Without French infrastructure, this city of almost ten million would’ve been much smellier. 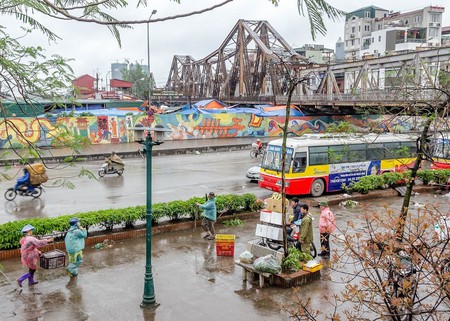 Long since replaced by bicycles and motorbikes, you can still find these holdouts of the French colonial days in the touristy areas around the country—near the Citadel in Hue, District 1 in Ho Chi Minh City and in Hanoi’s Old Quarter. They conjure images of French aristocracy chauffeured around Saigon, fanning themselves under the scorching midday sun. They’re a strange reminder of a different era. 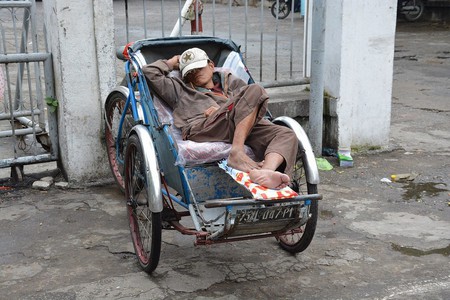 Cyclo driver taking a nap | © Paul Arps/Flickr
Give us feedback