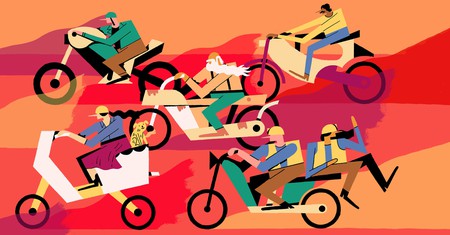 The motorbike is as iconic an image of Vietnam as conical hats or phở. There are 45 million of them registered, with many more in various states of decay throughout the country. And, as you would expect, there are familiar characters you see over and over on the road. Here are 11 types of people on motorbikes in Vietnam.

Why get a truck to transport your new kitchen sink when you’ve got two perfectly good hands? One is for driving, while the other is for holding appliances and lengths of pipe.

There’s construction everywhere in Vietnam, and those millions of workers fill the streets as they make their way between sites. There’s almost never just one person, though. Sometimes you see four people, the one on the back holding on for dear life—and all in matching jackets and hardhats.

After living in Vietnam for a while, you start hearing shrill, robotic voices speaking Vietnamese to you in your dreams. Or was it a dream? Nope, it was real. That’s somebody outside your window selling stir-fry at 5am. Chậm xào đê!

It almost defies belief that their knees can be pointed out that wide.

Silk driving gloves, flowery skirts for modesty, and designer high-heels. Their long black hair is in a ponytail, flicking up as they cruise along at a delicate speed. They’ve got the biggest automatic motorbike you can buy, despite only weighing 40kgs. (88lbs) They look like beautiful jockeys up on a Clydesdale.

Foreign men go through a progression of motorbikes. First, they rent something like a Honda Nouvo. Then, they upgrade to a classic semi-auto like the Honda Wave once they decide they’ll give Vietnam another year. And finally, they graduate to a beastly 250cc motorbike—their final evolution.

These wrinkled folks wear haggard clothes from decades ago, and their motorbikes look even older than them.

These little fluff-balls often surprise you when you’re stuck in a crowd at a red light. They look as comfortable on a motorbike as they do on solid ground, their tongues out flopping around. Bonus cute points if they’re slung in a modified hammock.

They drive old Honda Winds or Cubs, and they race around like they’re in a video game, barely missing others as they zigzag through heavy traffic. And they always seem to be the skinniest men on the road.

Groups of friends, often in matching soccer jerseys, all chatting away about their match as they head to the bar for a couple of celebratory drinks. Want to get around them? Good luck.

Mom’s driving, with a kid or two in her lap and a couple more clinging to her from behind. The kids all have death-grips, but they look calm as can be. They learn early on how to be good little passengers.