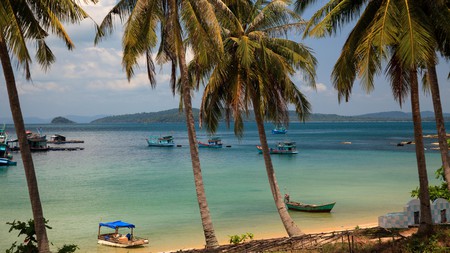 Keep a lookout for the following tricks during your stay in lovely Vietnam and you won’t end up in a pickle.

Vietnamese people are proud to show their beloved country to foreigners, and it’s easy to see why. The land is travel-magazine beautiful and the people are wonderful — well, almost all of them. Unfortunately, as with any place that relies on tourist trade, there are scammers and con artists looking to swipe your cash and valuables. Here’s how to spot them and avoid their scams.

You can also join Culture Trip’s specially curated small-group Vietnam adventure, which allows you to experience the best of this fascinating country with a Local Insider whose expert knowledge will mean you never have to worry about getting scammed.

Picture the scene: you’re sitting at a café or chatting on a street corner. A scooter with a pillion passenger pulls up. The passenger grabs your bag and the scooter speeds away. Pedestrians on the streets of Saigon are particularly vulnerable to this one. How to avoid it? Use a bag with a clasp catch, or a sturdy shoulder strap. If you’re sitting in a street café, loop the strap through your table leg and don’t sit street-side.

Shops in Hoi An and Saigon are famous for their handmade leather – especially bags, belts and shoes. The examples on display are usually created using the real thing, to entice potential customers in. Bespoke items are often partly fake – with leather outers but plastic lining or shoe-inserts. Before paying, check your garment thoroughly. If you suspect it’s fake, heat a piece of metal with a lighter and hold it to the plastic, which will melt. Then demand your garment is reworked.

3. Just not the ticket

This scam is particularly common at concert venues in Hanoi. While you’re queuing up to buy a ticket for a show you are informed that all the cheaper seats are sold out and that you must buy a much more expensive alternative. Always politely but firmly request that the ticket seller double-check – and if in doubt politely tell them that you don’t understand the problem. Then ask a local for help in purchasing what you need – the Vietnamese are happy to help tourists.

4. Collared by the dollar

Prices in Vietnam are often abbreviated and sometimes quoted in US currency – so 10 can just as easily mean $10 as it can 10,000 dong (about £0.35). Make sure that you check exactly what money you’re being asked for – especially in well-frequented tourist bars and restaurants. And if you’re paying in dollars be sure to check that you’re getting the right change – both according to current exchange rates and the note denominations.

A popular tourist agency or hotel will often spawn a whole host of imitators with almost exactly the same name. For example, a reputable business called Lotus Tours might engender a string of far less professional me-toos called Lotus Tour, Lotus Guest Tours or Lotus Touring. These often work in cahoots with drivers in the area. Be sure to check the address of the genuine establishment and to share it with your taxi driver before supplying the name of the business.

While frankly understandable, being asked for money when you take someone’s picture can be as unexpected as it is common throughout Asia. Of course, many local people are accustomed to tourist practices and want their remuneration. So before so much as looking through the viewfinder, ask permission. That way you can be sure that, if someone does want payment for that Instagrammable snap, you know in advance exactly how much, and won’t risk an unpleasant confrontation when that beaming individual turns to you and demands $10.

If you’re in Vietnam for a while, buying a bike and selling it when you leave makes sound economic sense. But keep your eyes open for faulty specimens, dodgy paperwork and switcheroos. In this scenario you’re shown a bike, which is then sent to the work room for a minor repair and exchanged for an older, inferior version of the same model. Conduct a test ride, check the paperwork and verify the registration before and after the final workshop dust-over.

8. When peanuts are not peanuts

Draft beer in Vietnam is cheap, cold and low in alcohol. With the hot weather it’s easy to gulp back. But be careful if your pints come with accompanying bowls of peanuts – these are liberally served in bars throughout Hanoi and Nha Trang. Portions are refreshed with every glass, whether you ask for them or not, and are easily – almost subconsciously – munched. Know, though, that they’re almost always as expensive as the beer, so your end-of-evening bill may be double what you expected to pay.

Buying a SIM card for your mobile in Vietnam couldn’t be easier – with every outlet from official telecom shops to corner stores selling them and with no need to supply personal information in order to obtain them. Beware the cheapest deals – they’re often to be found in unofficial fly-by-night stores that buy in bulk from official outlets at discounted prices. The problem with that? Since they start once cards have been purchased from the official outlets your cheapo, with-data plan might already be days old by the time you start using it.

It’s usually motorbike taxi drivers that try this one. They use sleight of hand to switch whatever money you give them for smaller denominations, and then they put on a dramatic show of indignation — to make it appear that you’re the one trying to rip them off. The most common scenario is switching a 500,000VND note for a 20,000VND, which is an easy trick to spring since they’re both blue. The best way to avoid this is to pay with small bills. Break your larger notes at convenience stores, restaurants or other reputable businesses.

This one involves taking advantage of men in touristy areas. An attractive female will start flirting with a guy who’s out by himself. Telling him how handsome he is, she starts enquiring whether he’d like a massage, all the while letting her fingers flit seductively around his trouser flies. Of course there’s an ulterior motive: emptying his pockets. Girls often work in teams for this one.

The two best companies in Vietnam are Vinasun (white) and Mai Linh (green) – with a few exceptions their drivers are honest. Unfortunately, other companies use identical colour schemes. Their trick is to point out their meter – everyone knows to avoid taxis without one – on which your fare proceeds to climb, suspiciously, much faster than it should. Be careful when you pay, too: cab drivers, like motorcycle taxi drivers, will often try the money switch scam. To be on the safe side, stick to the real deal – Vinasun or Mai Linh – or use a reputable app, such as Grab or Uber.

There are good reasons for stepping out in sneakers. If you’re wearing snazzy shoes in a touristy area, you can bet you’ll be hounded by shoe-shiners. More often than not, foreigners give in and get theirs done just to be left in peace, but here’s, as it were, the rub: a price is negotiated, but when the shoes come back, it has doubled, because of course the original amount quoted was just one shoe. And you’re advised to cough up – kick up a fuss and underworld muscle is never too far away.

Marijuana is illegal in Vietnam, but many foreigners smoke it openly. The problem is that tourists usually buy it from the motorbike taxi drivers who lurk around the hostels and bars. They’ll let you smell a bag of real marijuana as they negotiate the price, but once you pay, they’re gone and you’re left with a bag of tea. And good luck reporting it to the Better Business Bureau.

This one happens mostly in Hanoi. Street vendors with baskets of coconuts will ask if you want to use their bamboo baskets for a photo shoot. But while you’re clicking away, they’re chopping open coconuts for you that cost an obscene amount. What’s that you say? You didn’t ask for them? Get ready for some shouting and a gathering crowd of people who don’t take kindly to foreigners cheating the honest Vietnamese.

Massage parlors use this one to prey on lascivious men who ought to know better. A beautiful woman on the street convinces a guy to step inside for a massage, usually by flirting and laughing a lot. But the minute he has paid, said beautiful woman disappears, leaving a surly individual with gorilla-rough hands to perform the treatment. Another common scam is to charge the unwary ridiculous amounts for such basics as water and towels. When you refuse to pay, the gangsters step in. The moral of the story? Don’t go following pretty people into dark alleys. Do some proper research online instead.

Motorbike taxis — xe ôm in Vietnamese — are notorious cheats. In touristy areas, many of them are gangsters hoping to sell fake drugs to gullible foreigners. But the most common scam they pull is when they agree on a price for a trip and then ask for a lot more when you arrive at your destination. They’ll tell you that you must’ve misheard them, and when you argue, they escalate things quickly. They know most foreigners would rather pay a couple more dollars than make a huge scene in a strange area with no friends around.

Even the reputable taxi companies have staff that pull this one on tourists. Foreigners don’t really know the best routes, so the drivers use this to their advantage. They take a creatively long and circuitous route, often pretending to be lost so they can get a few more dollars by wandering around through back streets. A good way to avoid this is by having a map open on your phone. If the driver goes off in a strange direction, wave the map at them. But the best way to avoid this is to take Uber or Grab. They follow routes on the map.

You usually won’t have issues with the larger bus companies, but a common scam is to tell foreigners that they have to pay a fee when their bags are being loaded into the hold. Staff know the unwary will just pay the small fee to avoid confrontation; and since they can’t read Vietnamese, foreigners tend to assume the fee was mentioned in some unintelligible small print. But there’s no such thing as a baggage fee in Vietnam, so politely refuse and step aboard. And ignore instructions to move to the back by the toilet. If you have an assigned seat, stay in it. If somebody’s in it, pick another one and sit tight, regardless of what they say.