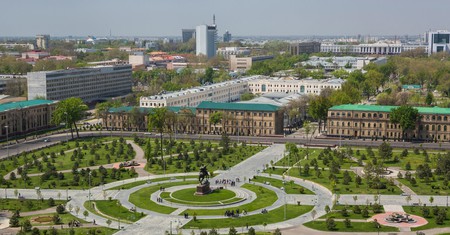 Uzbekistan is fast becoming a favourite among travellers wanting to discover Central Asia. Its capital, Tashkent, has no shortage of things to discover and do, from traditional teahouses to vibrant street art.

Tashkent is a severely underrated city. It may not have the spectacular Silk Road architecture and historical charm of Bukhara or Samarkand, but scratch the surface and Tashkent will reward you with warm hospitality and local culinary delicacies, as well as masterpieces of Modernist Soviet architecture and a taste of a unique culture that is both deeply historical and constantly evolving.

You could spend weeks wandering around Tashkent’s biggest market, Chorsu Bazaar, which sells everything from clothes and kitchenware to traditional handicrafts and fresh food. Check out the bread section and watch the expert bakers shaping the dough into rounds before using a long paddle to slap it onto the inside of a wood-fired oven, where it sticks to the walls and bakes upside down. Nearby is the fresh produce section, where sellers set out piles of fruits, vegetables and herbs; the sweet melons and grapes are a real treat. Ask to taste before you buy, and always haggle. 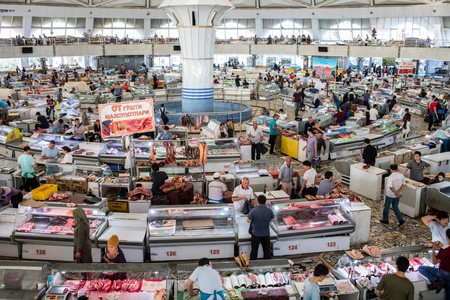 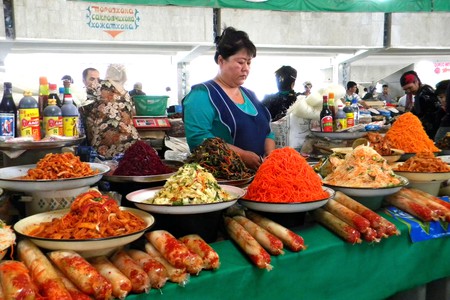 Ask to taste before you buy, and always haggle | © MARKA / Alamy Stock Photo

Speaking of herbs, a wander around central Tashkent might have you thinking that the city’s residents are obsessed with basil: every plant pot and flower bed seems to be overflowing with the stuff. Rumour has it that when President Shavkat Mirziyoyev came to power after the death of long-time ruler Islam Karimov in 2016, he mentioned his fondness for basil and the citizens responded by planting it just about everywhere.

The choyxona (teahouse) has been an institution in Uzbekistan for centuries, and is the perfect place to chat, sip a cup of tea, read the paper or have a nap in the shade. While Tashkent lacks the historical teahouses of other ancient Silk Road cities, you’re never short of somewhere to get a stellar brew. There is a bustling street-food section of Chorsu Bazaar, which is the ideal people-watching spot, perfect for a snack and a pot of tea while you watch the cooks preparing their traditional dishes.

Tashkent isn’t short of museums and monuments, but the Museum of Applied Arts is worth singling out, less for its exhibits than for the gorgeous building that houses them. Dating from the early 1900s, it was once the home of imperial Russian diplomat Alexander Polovtsev, who had it grandly decorated in traditional Uzbek style, full of colour and intricate carvings. He was soon transferred elsewhere, so he never saw this vibrant building finished. His personal collection of handicrafts nonetheless makes up the bulk of the artefacts on show at the museum: carved wooden furniture, elaborate wall hangings, traditional instruments and ceramics. 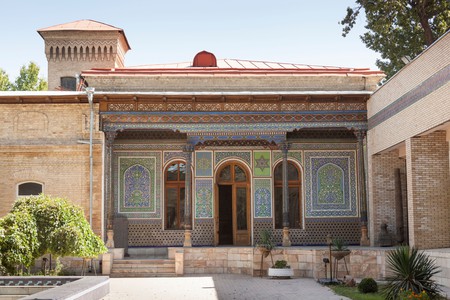 See the oldest Quran in the world

The Khast-Imom complex is the old religious heart of Tashkent. It is home to the oldest Quran in the world – a colossal book on display at the Muyi Mubarak Library, allegedly stained with the blood of the Caliph Uthman, who was murdered while reading it in 656. It was acquired by Amir Timur in the 14th century and made its way back to Tashkent after a stint in St Petersburg. In fact, it may not really be the oldest Quran, as there is some doubt over when it was made and how it ended up in Tashkent, but hey, who’s going to let such details get in the way of a good story? 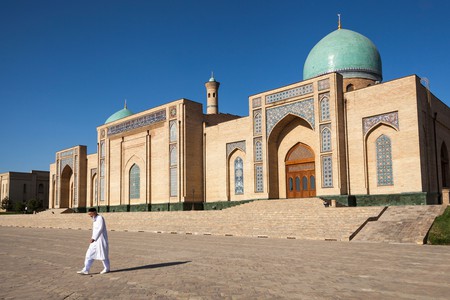 Up until now, Tashkent has lacked the kind of hipster-cool nightlife that Moscow or Tbilisi is famous for, and young locals tend to hang out at each other’s apartments rather than hitting the town. That doesn’t mean there aren’t places to go after dark, though: enjoy an al fresco, house-brewed pilsner or unfiltered wheat beer on Cafe Dudek’s terrace, or party until dawn at La Terrasse. Steam Bar is known for its good cocktails, craft beers and live music.

Escape to the mountains

Tashkent can get very muggy in summer, and you may find yourself craving fresh air – the short drive towards the Chimgan skiing resort and the Tian Shan mountain range offers the perfect day trip. The tiny village of Beldersey has two rickety chairlifts that run all year, taking skiers in winter and walkers in summer up into the hills. Most people hang around at the top of the longer lift, but it’s worth packing a picnic and heading on for a hike, at least up to the abandoned weather station on top of the nearest peak. The stunning mountain scenery is well worth the walk! 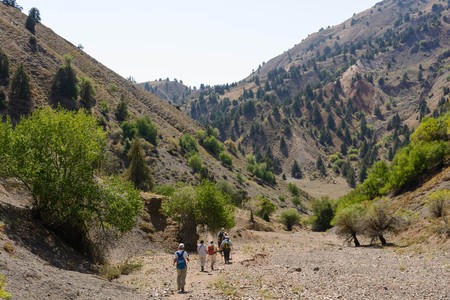 While you’re in the area, the Lake Charvak reservoir is a must-see – an azure jewel surrounded by hills. It’s a favourite weekend destination in the summer, so be prepared for crowds down on the beach, but grab some shashlik and soak up the sun, try a variety of water sports or head up to the top of the cliff to have a go at paragliding and take in the scenery from the air. 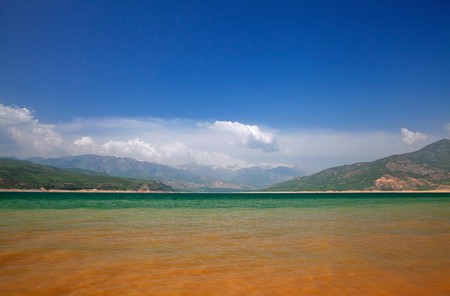 Take a ride on the metro

Anyone who has been to Moscow will know that the Soviets took their metro stations seriously, building glittering halls of marble and underground colonnades for city commuters. Tashkent has its own ‘palaces for the people’, and for the ludicrously cheap price of a metro ticket (1,200 som or about £0.11) you can take in the amazing variety of architectural designs of stations all over the city. Highlights include the futuristic Kosmonavtlar, built in 1984; Alisher Navoi, named after the 15th-century poet, with spectacular domed ceilings; and cotton-themed Paxtakor with its blue, white and yellow mosaics. 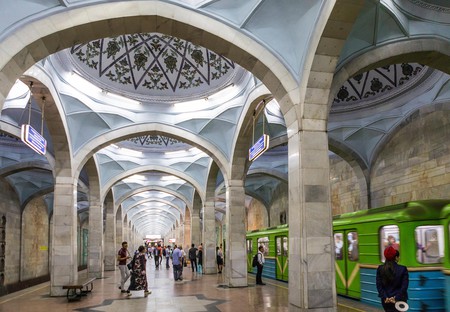 Track down beautiful murals all over town

Generally speaking, the architecture of downtown Tashkent is nothing out of the ordinary. An earthquake destroyed much of the old city in 1966, and the government took the opportunity to replace the old mahallas (neighbourhoods) with wide boulevards and multistorey apartment blocks. However, there is beauty to be found in unexpected places, and many of these apartment buildings are decorated with huge, colourful murals depicting such diverse subjects as astronaut Yuri Gagarin, construction workers and 11th-century scientist Avicenna. Some of the most impressive can be found in the Mirobod and Mirzo Ulug’bek districts.

You can’t go to Tashkent without trying plov. Uzbeks are extremely proud of their national dish, and will argue at length over which regional variation of the recipe is best. Supermarkets even sell it ready-made in tins (though this is not necessarily recommended). For the uninitiated, plov is a dish of rice, carrots and melt-in-the-mouth lamb, gently spiced with cumin, and sometimes with raisins or other dried fruit, onions and boiled quail eggs to top it all off. Tourist guides insist that you go to the Central Asian Plov Centre, which does boast the biggest rice cauldrons that you will probably ever see, but the plov itself is nothing special; better to pop in to any of the countless cafés that have a huge pan of the stuff bubbling away on the street for a lunchtime plate. 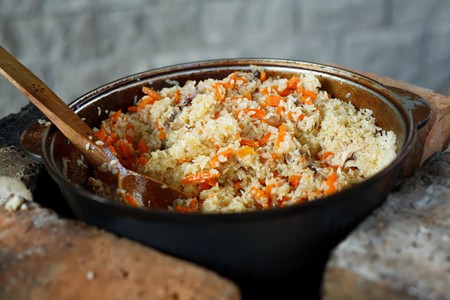 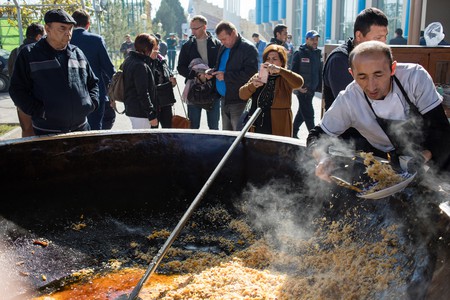