Speeding Along the Ancient Trade Routes of the Old Silk Road 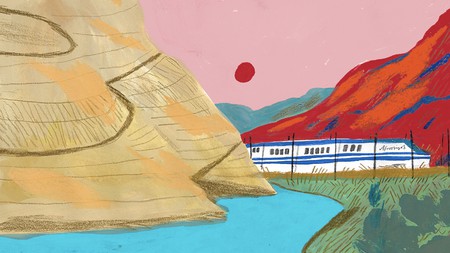 Uzbekistan is opening up to visitors. With simpler visas and an expanding high-speed rail network illuminating a string of once well-travelled historical cities, it seems that time has just remembered this overlooked stretch of the ancient Silk Road.

It’s an hour before sunrise and there’s a cold bite to the air, which drives me deeper into my down jacket as we step out onto the streets of Samarkand. For thousands of years, travellers and traders have loaded up and left this city before dawn, hoping to avoid the worst of the daytime desert heat. But while merchants from a bygone era would have been packing camels’ saddlebags, we’re loading our luggage onto something more sophisticated: a brand-new high-speed train.

Our destination is Tashkent, known in Medieval times as Chach, but now the fast-modernising capital of the Republic of Uzbekistan. This is the last leg of a journey that’s taken us across the country, from Khiva in the West, to Bukhara, and finally, Samarkand, following the network of ancient trade routes known as the Silk Road. Outside the window, the landscape whipping past at incredible speed is one that’s changed little since Alexander the Great passed through here on his way to India, more than 300 years before the birth of Christ. Inside our train carriage, however, everything is sleek, shiny and new. 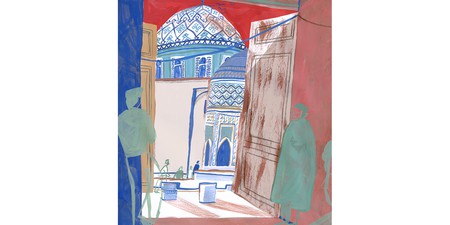 Named Afrosiyob, after the old name for Samarkand, these Spanish-built trains, with their striking scooped noses, are an impressive feat of engineering. Capable of top speeds of 240 kmph, they can cover the 345 kilometres between Samarkand and Tashkent in just over two hours. In 2016, the line was extended from Samarkand to Bukhara, and when Khiva – another of Uzbekistan’s UNESCO World Heritage cities – is connected later this year, the east-to-west journey that used to take 19 hours on old diesel trains (and who knows how long by camel caravan) will be reduced to just eight.

The great cities of the Silk Road have long fascinated outsiders, but they haven’t always been this easy to visit. In Khiva, our guide, Ines Yuvakaeva, tells us the story of an early, ill-fated Russian expedition: Tsar Peter the Great was apparently so convinced by reports that the Oxus river was overflowing with gold that he dispatched the dashing general Alexander Bekovich-Cherkassky to investigate. Things initially went well for the Russians, who defeated an army led by the Khivan ruler Shergozi-Khan outside the city. Bekovich-Cherkassky met the Khan to accept his surrender. “But that night he gave the Russians something to drink and killed them all,” Yuvakaeva tells us. “They turned the general into a drum.”

Eventually, inevitably, Russia’s superior weaponry won out, and by the 19th century the independent khanates of Central Asia had been swallowed up as provinces or ‘protectorates’ of the Russian Empire. Terrified that the British might invade from India, the Russians kept the region on lockdown, and after the Bolshevik Revolution, access for Westerners wanting to visit became, if anything, even more limited.

When the Soviet Union collapsed in 1991, some of the newly formed governments (notably in the Baltic states) welcomed outside influences and embraced democracy. In Uzbekistan, however, the country’s leader – former Uzbek first secretary of the Communist Party, Islam Karimov – changed his job title, but very little else. He continued to preside over a brutal and paranoid regime that persisted for a further 27 years. Democracy was smothered. Dissent was crushed. Torture was widespread, with human-rights organisations reporting that he boiled his political opponents alive.

In this climate, tourism and foreign investment were severely restricted. As Viktoria Yalanskaya, the guide who accompanies us throughout our trip, explains, “before 2015, tourism [made up] only 0.3 percent of the economy.”

All this changed in 2016, when the ‘president for life’ finally passed away. His successor, Shavkat Mirziyoyev, launched a set of sweeping reforms that opened up the country dramatically. Foreign investment has started to flow into Uzbekistan and in late 2019 The Economist named it ‘country of the year’. The new government is not without its issues, of course, but for people wanting to explore the cities of the Silk Road, its arrival has changed everything.

“One of the new president’s first decrees was about boosting the tourism sector,” says Kudratilla Lutfullaev, an adviser to the minister of tourism. A new tourism board was launched and investment in infrastructure – including the millions spent on creating a high-speed rail network that is up there with Japan’s Shinkansen for speed – was prioritised. In February last year, Uzbekistan abolished its labyrinthine visa process. Citizens of more than 80 countries, including Canada, Australia and the UK, can now travel visa-free, with more countries set to be added to the list this year.

The results of these reforms have so far been impressive. Between 2017 and 2018, the number of foreign tourists coming to Uzbekistan doubled and the cranes that dominate the Tashkent skyline tell of a hotel-building boom. The Hyatt has just been joined by a new Hilton hotel. Western tour operators are apparently selling more Silk Road trips than ever before; indeed, later in 2020, the first TUI tour group will touch down in Tashkent.

“In one of his speeches, [president Mirziyoyev] gave us the target of growing the tourism sector to US$10 billion (£7.7bn) by 2025,” says Lutfullaev. Given the way the numbers are growing, this “best-case scenario” is looking increasingly achievable.

In many ways, with such a wealth of history on display here, it’s incredible that this country hasn’t yet been overrun by tourists. Crossing the red sands of the Kyzylkum Desert (a section yet to be connected to the new rail network), our bus detours so we can explore citadels dating back to the fourth and fifth centuries BC – when the rule of the Khorezm Empire stretched as far south as the Persian Gulf. In Khiva, we climb the city walls and watch the sunset over a skyline that could rival Isfahan in Iran. In Bukhara, we marvel at the 46-metre-high Kalyan Minaret – built in 1127 and declared so beautiful by Genghis Khan that he ordered it spared, even as he reduced the rest of the town to rubble.

Everywhere, the architectural and artistic brilliance of Central Asia’s Medieval citizenry is in evidence. For roughly 800 years – from around AD 700 to the start of the 16th century – the great leaps forward made in this part of the world in science, maths and astronomy far outstripped anything that was happening in Europe. Madrasas built in Uzbekistan, we’re told, influenced the design of Oxford and Cambridge colleges, and it comes as no surprise to learn from the Princeton professor Stephen Frederick Starr (whose book, Lost Enlightenment, I’m reading as we go) that many of that era’s leading lights from what we think of as ‘the Arab world’ were, in fact, Central Asians.

Nowhere is their illustrious legacy more obvious than Samarkand’s Registan, the jewel in Uzbekistan’s UNESCO World Heritage crown. Flanked on three sides by intricately tiled Islamic colleges, this was once the city’s main marketplace, and a centre of Silk Road commerce. These days, it hosts a nightly sound and light show throughout the tourist season – further evidence of the new trade that’s slowly breathing life back into these ancient routes.

For Mavluda Narzullaeva, the recent growth in tourist numbers has been a huge blessing. Along with her husband, Abdullah Narzullaev, she runs a workshop in the village of Gijduvon, making pottery, embroidered fabrics and carpets using traditional methods. “Everywhere else in Uzbekistan they use electric kilns,” she tells us as she shows us around. “But here we use original, wood-fired ones.” Such is their commitment to the old ways, that they grind raw materials for their glaze on a millstone driven not by a generator, but by the donkey they keep out the back. 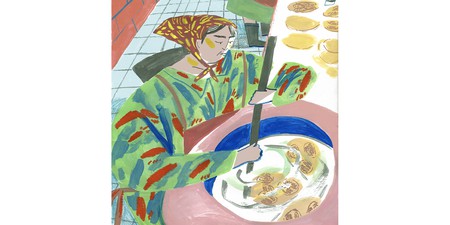 Narzullaev comes from a long line of potters. In the Soviet era, his father was called upon to help restore the tilework in the Registan. But while his skills were respected, there wasn’t much of a market for them in a time when cheap, mass-produced crockery was being churned out on Soviet production lines. Tourism is changing this. Visitors appreciate the authenticity of pots and plates produced from scratch, and the Narzullaevs now offer masterclasses, allowing visitors to make their own pots on hand-spun wheels – something our group attempts with varying degrees of success.

This revival of traditional Silk Road crafts is something we encounter time and again in Uzbekistan. In Bukhara, we meet Sayfullo Ikromov, a sixth-generation blacksmith whose huge, calloused hands produce surprisingly intricate silver scissors. “In the 18th century, my ancestors made weapons for the emir,” he tells us. “But in Soviet times people weren’t buying.” As more visitors arrive, however, business is picking up, and he introduces us to his son, who he’s training as an apprentice.

We might appreciate the convenience of Uzbekistan’s new, high-speed trains, but for Ikromov, Nazrullaev and the other descendants of the people whose craftwork first made the Silk Road famous, the modernisation of these ancient transport links has been transformative. Visiting from Western Europe has now become so easy that one UK newspaper suggested taking in the Silk Road cities in a long weekend.

All of this contributes to a feeling that this is a country on the cusp of something. The building blocks of a tourism boom are all in place, but the crowds have yet to come; although, admittedly, our trip falls at the end of the high season. Outside the cities, on what were once the Silk Roads themselves, we see any number of donkey carts, bicycles and knackered old Kamaz trucks (the Soviet vehicles that replaced camel caravans in the late 20th century), but few, if any, busloads of fellow tourists.

Uzbekistan, it seems, has everything to offer, but it’s yet to acquire the theme-park polish of a hugely popular destination – or the artifice that accompanies it. Not once are we confronted with a hassly restaurateur, a tout with tickets to flog or a carpet vendor going for the hard sell. Instead, we’re met everywhere with warm smiles (often full of gold teeth, a hangover of Soviet dentistry, we’re told) and bottomless cups of tea.

On our first evening in Khiva, our guide, Viktoria, arranges for us to have dinner in the home of a local family. Afterwards, a song-and-dance troupe begins to play. “They’re three generations from the same family,” she says. “They won the people’s choice award on Uzbekistan’s Got Talent.” One of the men, I notice, is playing a drum – although thankfully it appears to be made of goat’s hide rather than anything sinister.

After a couple of numbers, they encourage us to join in, refusing to accept our English reluctance for an answer. It might be a stretch to call it cultural exchange, but as we work our way through poor imitations of their dance moves, I can’t help but grin. Despite the best efforts of various rulers to keep foreigners out, the traditions of hospitality and openness, borne from centuries at the centre of the world’s greatest trading network, are alive and well.

The writer’s trip was organised by Uzbekistan Airways and Jules Verne travel.