Exploring the Architectural Treasures of Samarkand 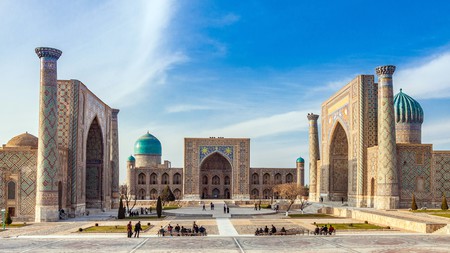 Featured on the UNESCO World Heritage List and celebrated globally for its culture and art, Samarkand – the colourful capital of Uzbekistan – has inspired many of history’s artistic minds. Take a tour through some of the city’s most magnificent monuments. 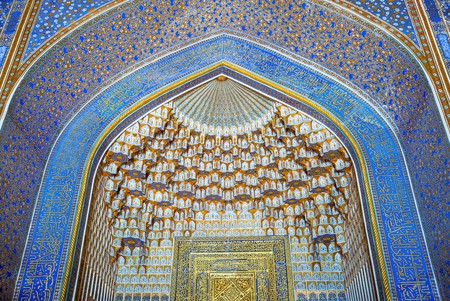 The name Samarkand conjures an image of the old Silk Road, blue domes, brightly coloured tile work and cosmopolitan charm, deep in Central Asia. It is a romantic image that, thanks to the preservation of a number of fine monuments, can still be experienced on a visit today.

The architectural gems of this city have stood the test of time, weathering wars and the aftermath of revolution, enchanting visitors in modern times as they must have centuries ago. Each has a special place in the hearts of locals. “[These buildings] are a part of our national identity and help show the role that we played in Central Asia’s culture,” says local teacher Umid Porsaev. “It’s a reminder of who our forefathers were, of who we are and what we want to be.”

The Tomb of Emir Timur

To understand the historical importance of Samarkand, look to its most famous ruler: the military conqueror Emir Timur. Immortalised in the West as Tamerlane, Timur chose the city as the capital of his empire in the 14th century, giving it a wealth of attention and treasures. While his legacy in many countries is one of war, brutality and conquest, in Samarkand he is also remembered as a patron, the man credited with taking the country to its greatest heights.

It is fitting, then, that one of the first major historic sites on the road into the city from the train station is Timur’s tomb, the extravagant Gur-Emir, where he is buried alongside many of his descendants. The tomb’s brilliant exterior and blue domes look almost fantastical thanks to a riot of colours. Inside, the tombs, niches and abundant calligraphy show the artisanal mastery of the era.

Through his many conquests, Timur brought riches, books and more to the city. “Samarkand was a real capital, and [Timur] ruled a massive empire that included many countries,” explains local tour expert Aygul Khanum. “He came from a humble background and rose to be very powerful; he was the one who made the city as great as it was.” 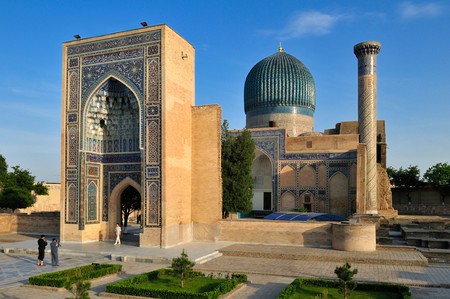 The madrasahs of Registan Square

Samarkand’s influence would outlast the infamous Emir Timur, as successive rulers continued to beautify the city. In Registan Square stand three massive madrasahs, the Muslim name for both secular and religious educational buildings. Featuring the stunning variety of blue tiles that are characteristic of this city, each has turquoise, sea-green and cerulean niches, domes and minarets. 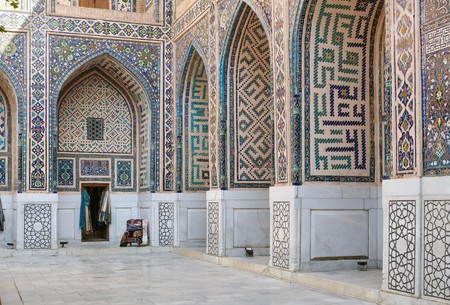 Tilya Kori Madrasah, Sher-Dor Madrasah and Ulugh Beg Madrasah were the universities of their time, places of learning that attracted students and thinkers from all over. The oldest in the square, Ulugh Beg Madrasah, was built in the 15th century by Mirza Ulugh Beg, the grandson of Emir Timur as well as an astronomer and scientist. The building’s ornate minarets rise like massive flutes, standing across the square from Sher-Dor Madrasah’s impressive iwan (vaulted hall), which is embellished with the image of two lions hunting deer as suns rise from their backs. “One interpretation of this symbol relates to the students,” says Khanum. “As you can see, the lion is pursuing the deer, serving as an inspiration for students to seek more knowledge.”

The treasures of Samarkand have been recognised by UNESCO and continue to inspire travellers, bearing the imprint of a legacy of opulence that still thrives today. Historic mosques and tombs dot the city, and each has their own unique characteristics, from the massive Bibi-Khanym Mosque to the Rukhobad Mausoleum.

The Shah-i-Zinda Necropolis, a series of grand palatial tombs, has a combination of a haunting spirituality and an opulent aesthetic that sets it apart. The massive site, filled with rows of historic mausoleums, bursts with colour and geometric patterns that epitomise Central Asian art and will linger in the memory. “For us, these buildings are unparallelled,” says Porseav. “They are like treasures that keep us local people proud.” 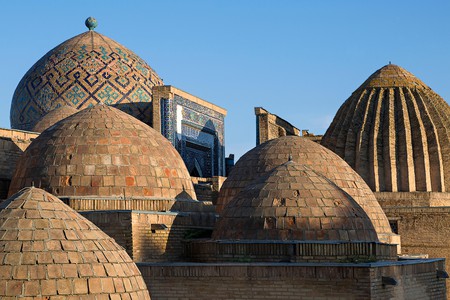