The Door to Hell: Darvaza Gas Crater in the Karakum Desert

The Darvaza Gas Crater is in Turkmenistan

It’s a classic horror-film premise. While looking for oil reserves in a great desert, men drill into the ground, meddling with something they don’t understand. The land cracks and the drilling rig collapses into a vast cavern. The gateway to hell is open…

The Darvaza gas crater, in Turkmenistan’s Karakum Desert, is a great tear in the earth, 30m (98ft) deep and 70m (230ft) across. Uncovered by the Soviets, it has burned for decades, and locals know it as ‘the Door to Hell’. And, if you’re intrepid enough, you can visit. 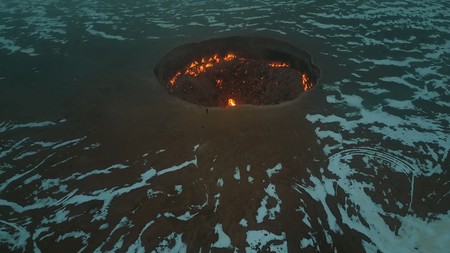 The Door to Hell

The Karakum Desert covers almost three-quarters of Turkmenistan, in Central Asia. Once crossed by the famous Silk Road, it contains significant oil and natural gas deposits. In 1971, Soviet engineers came looking for oil, but instead found a pocket of natural gas.

When the pocket caved in, it created the Darvaza gas crater – and methane immediately began to escape. To stop any poisonous gases spreading to nearby towns, the engineers lit the gas on fire. And it’s still burning.

Myths swirl around the crater’s origins, and some geologists claim the crater wasn’t lit until the 1980s. Whatever the truth, it burns now, looking like the world’s largest gas hob in daylight, and like a roaring chasm of fire and destruction at night.

Flames lick around the crater’s floor and edge, scores of small bonfires surrounding bigger fires, like devilish spirits gathering in the dark. And while Darvaza has a certain fame, not many visitors actually come here, and you can – carefully – creep towards the crumbling edge of the crater to gaze into the eerie fires.

While only one of the craters is lit, there are in fact three in the group – the other two bubble with mud and water. There’s a sheltered place to camp behind a small hill, plus a few toilet huts and several tour-company yurts.

The basic facilities are compounded by the fact that this is a remote destination. Darvaza village is a small settlement a short drive from the crater, with some limited accommodation. Ashgabat, Turkmenistan’s capital, is around a three-hour drive to the south, and Daşhoguz, near the border with Uzbekistan, is around five hours to the northeast.

Given this, most people visit on a tour, although it is possible to visit independently – buses between Ashgabat and Daşhoguz stop at Darvaza village, where you can arrange local transport. It’s possible to hike from the village to the craters, but the desert terrain and the risk of getting lost in the desert on the way back (when you don’t have the lights of the crater to guide you) mean it’s not recommended.

What else to see in Turkmenistan

Darvaza crater may be Turkmenistan’s best-known sight, but for many years it wasn’t publicised – being seen as a sign of failure rather than a grand phenomenon. You still won’t see as much focus on the crater as you will on the Silk Road glories of ancient Merv, a town with museums and minarets, and Konye-Urgench, a sprawling set of ruins.

The capital, Ashgabat, is full of oil money – income from Turkmenistan’s natural resources has been ploughed into monuments, parks and palaces. Elsewhere, the remote Yangykala Canyon is an epic landscape of ochre- and rose-coloured rock, while in other parts of the Karakum Desert you can explore oasis towns and traditional ways of life.

In a three- or four-day trip, you could take in Ashgabat, Konye-Urgench and the crater, while a longer trip opens up the chance to really get under the skin of a country that flies well under most tourists’ radars.

More than most sights, the Darvaza Gas Crater is fragile. Some of its edges are crumbling, and no one knows just when its fires will stop – they could last another 50 years, or subside tomorrow.

Things are complicated further by the Turkmenistan government’s desire to exploit the oil and gas in the area. There’s already a small pumping station near the crater, and further expansion could mean the crater drying up or being filled in.

If you do want to gaze through ‘the Door of Hell’, you’d better head there quickly.