The Story Of The Bards Of Turkmenistan 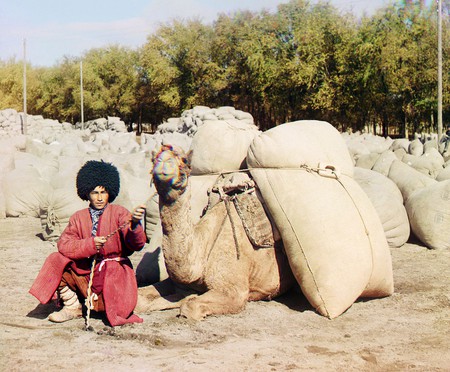 The role of the Turkmen bard, or bagşy, is important in Turkmen culture. A bagşy is always a man: simultaneously a poet, singer, musician and bard, who tells oral epics and narrative tales. Furthermore, unlike other Turkmen music genres, such as folk and instrumental music, bards of Turkmenistan have a strict tradition of professionalism.

But there is more to being a bagşy than being a professional performer, as the origin of its name reveals. The word bagşy comes from the Turkish term bak (bakmak) meaning ‘to look carefully’ or ‘to watch.’ To be a bagşy, therefore, means being someone who investigates or perceives. A bagşy is not only a professional performer but also a fortune teller, a wise man, a teacher or a guardian.

The prestigious status of the bagşy is hardly surprising given the mystical traditions that surround the profession’s roots. According to tradition, the Turkmen bagşy receives the gift of poetry during sleep from his patron saint Baba Gambar, or Asky Aÿdyñ.

Once a man sets down the path towards becoming a bagşy, he will traditionally learn his art in both his home and in the home of his teacher, where he will stay for a number of years. After his training is complete, the master (halypa) will introduce the new bagşy to the community in a ritual blessing (pata). If anyone practices being a bagşy without being blessed, they would be treated as an illegal or haram performer.

The bagşy repertory may be split into two parts: dessan and songs. The former is an epic tale in prose. It normally takes the form of a monologue or dialogue and is performed by a specialized dessancy-bagşy. In northern Turkmenistan, the dessan are usually performed accompanied by a ghidjak (spike fiddle) and dutar (a two-string, long-necked lute). In the southeast, the dessan are more likely to be performed accompanied by one or two dutar. A recital of dessan is called a ÿol, which means ‘journey’ or ‘road.’

Dessan can be divided into two further types. The first encompasses parts of epic-cycles such as Gorkut atanyñ kitaby (The Book of Dede Korkut), Oguz nama (The Tale of Oguz) and Yusup-Ahmeta, attributed to the 18th-century Turkmen poet Gurbanaly Magrupy. The second type includes ‘folk novels,’ which lie between oral folktales and classical written texts. Some of these are anonymous, while others are interpretations made by the performer of tales, fables and stories from folklore or classical Turkish or Persian literature.

A concert by a bagşy, or ÿol, involves beginning, middle and closing stages. The first stage opens the recital with varying duration depending on the length of the entire performance. The middle stage is the longest part where the bagşy ‘enters the right road,’ signifying both his style and emotional intensity. The performance reaches its climax during the final stage. It is comparatively brief, however, comprising of less than a dozen songs.

The bagşy signifies the three different stages of a ÿol by a different zone of tonal space. Each zone is related to a vocal register: the first zone is in a low vocal register, the second is a middle register, and the concluding stage lies in a high register. This rise from low to high register is achieved by altering the tuning of the dutar. At the start of the performance, the bagşy tunes the dutar as low as possible to accompany the lowest register of his voice. As the performance progresses, he raises the pitch of the instrument by a quarter- or semitone. This indicates to the audience (often to their delight) a rise in emotional tension and the bagşy’s mounting expressiveness. During a performance, this ordering of starting from a low register and reaching a high one at the end is strictly followed.

Each of the tonal ranges has a particular collection of songs associated with it. Consequently, the bagşy’s vocal repertory can be divided into three groups. The first group (ÿapbyldak aÿdymlar) contains songs prepared for the low register and are performed in the first stage of the ÿol. These low songs frequently have a narrow range (normally a fourth or a fifth). The songs for the second stage (orta aÿdymlar) have a medium range (normally an octave), and songs for the high register played in the final stage of the concert (çekimli aÿdymlar) will have an even wider range, often exceeding an octave.

The texts of bagşy songs have an equal and unchanging number of syllables in a line. The most common are lines of seven, eight, and 11 syllables. The relationship between words and music in bagşy songs is complex. Although there is a straightforward division of the song into melodic stanzas that mirror the poetry’s strophic structure, this is complicated by the fact that the melody within these stanzas is seldom synchronized with the text’s structure. Moreover, the structure of a song is often modified during the performance, resulting in irregular rhythms. This is one of the most distinguishing characteristics of Turkmen music.

Perhaps the most distinctive trait of the bagşy repertoire is the abundance of non-musical, acoustic effects. These sounds are thought to be associated with magical spells. There are three different types: shouts or cries; ‘hiccups’ or ‘barks’ called juk-juk; and rustling sounds (snoring, moaning, murmurs). Calls, such as ‘eÿ’, ‘aÿ’, ‘ÿareÿ’, ‘ha’ and ‘ah’, do not usually have a definitive pitch. The juk-juk is a favorite ornament for both performers in the north and south. However, in the south, it’s performed very narrowly (usually with the vowels ‘i’ or ‘ü’) and very deeply. In contrast, the juk-juk effect made by northern performers is guttural, shallow and performed on the vowels of ‘e’, ‘a’, and ‘u’.

Northern and southern styles are also distinguished by their singing styles. In the north, their singing is throaty, flat, stifled, and hoarse. They sing quickly, which can often blur the melodic line. When the bagşy sings in high registers, it can turn into prolonged and intense cries. Southern bagşy, however, sing with a broad, sonorous and slightly nasal voice. Their singing is distinctive for its very high register.