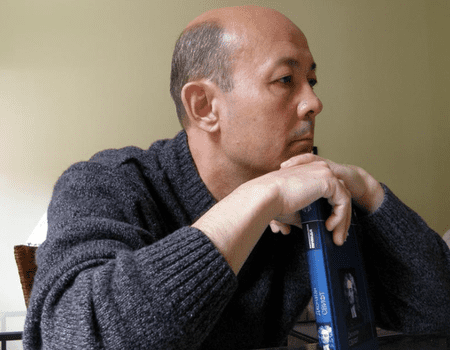 The Turkmen writer included in our Global Anthology spoke to us about his humanitarian work, lampooning the Berdimuhamedow regime, and the contemporary literature of Turkmenistan.

Like most authoritarian states, there are two Turkmenistans. The first is an idealized, terror-free country so rich in natural resources that it provides its citizens with free electricity, water, and gas, and education. Ashgabat, it’s capital city, is a Disneyland of opulent mosques and 24-carat gold leaf covered statues of its leaders, the latest being a three-story handmade crag of rock crowned by a horse atop of which sits its current president for life and benevolent provider of this grandeur, Gurbanguly Berdimuhamedow.

The second Turkmenistan is the state experienced by everyone other than the President, a country that according to Human Rights Watch, “is among the world’s most repressive and closed countries, where the president and his associates have total control over all aspects of public life. The government ruthlessly punishes any alternative political or religious expression and exerts total control over access to information. Independent critics and their families, including in exile, face constant threat of government reprisal. Authorities continue to impose informal and arbitrary travel bans on activists and relatives of exiled dissidents, and others. Dozens of people remain forcibly disappeared presumably in Turkmen prisons.”

For the Turkmen writer Farid Tukhbatullin, bringing global attention to the atrocities of the Berdimuhamedow regime is a full-time job. As the director of the Vienna-based Turkmen Initiative for Human Rights, the editor-in-chief of its publication “Chronicles of Turkmenistan,” Tukhbatullin has garnered praise for his indefatigable activism, a reputation that keeps him and his family (especially those still living in Turkmenistan) under constant threat and harassment. Along with his journalism, Tukhbatullin is an active fiction writer, among the very few Turkmen prose writers to be translated into English. Tukhbatullin’s experiences are reflected upon his narratives, which bite with satire and black comedy. His story “Erotic Fantasies of Turkmenistan,” in which the protagonist encounters a state-run brothel, is the Turkmenistan selection for our Global Anthology, and one of the more hilarious pieces to be included. The madness begins from the first sentence and doesn’t let up till the last.

We spoke to Tukhbatullin about the his humanitarian work, lampooning the Berdimuhamedow regime, and the secret contemporary literature of Turkmenistan. 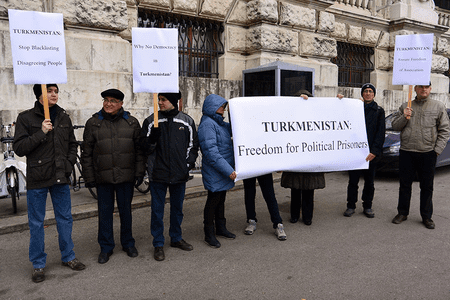 Protesters at the Hofburg Palace during a convening of the OSCE Permanent Council, attended by a Turkmen official. Vienna, 2014

Your story “Erotic Fantasies of Turkmenistan,” originally published in Index on Censorship magazine, is a satire that imagines a bureaucratic brothel where the narrator has to keep producing all of these forms, and where a policeman stands guard to make sure customers don’t engage in indecencies like “ideological subversion.” Could you talk about the basis and realities that this satire is commenting upon?
Turkmenistan is a classical dictatorship, and one of its many symptoms is its out of control bureaucracy, especially in regards to documentation. Filling out paperwork is as a part of life as buying bread—if you want to send a child to school, or to university, or to work, or to retire, you must fill out government forms. Even errands as simple as sending or receiving wired necessitates a lot of paperwork. And it only gets more ridiculous. For instance, every citizen, even small children, need to be able to provide on command the names and surnames of all of his or her relatives and ancestors, a list that can stretch several generations. And in addition to that, they would be required to include where each deceased relation is buried and whether or not they any of them had been imprisoned. Its this preposterousness that I was referring to in my story.

Turkmenistan currently ranks third to last on the World Press Freedom Index, right above Eritrea and North Korea, and all three below Syria. North Korea and Syria are infamously brutal states, but Eritrea and Turkmenistan are less well known. Why do you think that is?
Turkmen propaganda, through its media, certainly says that the whole world knows about Turkmenistan. That everyone is surprised and envious of how well people live in Turkmenistan. In fact, unfortunately, the world knows very little about my country. It is not interesting either from a political or economic point of view. Moreover, this is a very closed country, where there are very few foreign tourists and virtually no foreign journalists. If it is known for anything, it is for the cult of personality of its leaders. The first president Saparmurat Niyazov, for example, wrote a book called the Ruhnama, a spiritual guide that to he placed alongside the Koran in importance and required it in school curriculums. Niyazov’s successor Gurbanguly Berdymukhammedov had a giant golden rotating statue of Niyazov removed from the Ashgabat’s central square only to replace it with an equally imposing golden and statue of himself on a horse atop a marble cliff. If any global attention is brought to Turkmenistan, its largely just to gawk at the ludicrous narcissism of its presidents.

As an outspoken activist of the Berdimuhamedow regime, you work as the head of the Turkmen Initiative for Human Rights and editor-in-chief of the website “Chronicles of Turkmenistan.” What are some of the ways you are raising awareness of the atrocities under his administration? What are some of the successes you’ve had?
We launched this publication to report upon human rights violations happening in the country. But our monitors were sending us all sorts of intriguing information that we decided to publish all of it. In doing so, we became the only only independent Turkmen media outlet and have grown quite a readership, even among global media companies and news outlets in the world. As a result of our popularity, we caught the attention of the authorities who labeled us as enemies of the state, even though we are not trying to cause problems but to solve them. Of course, the authorities would prefer us not to highlight the countries many problems, even going so far as to censor the word “problem” from state-run publications. 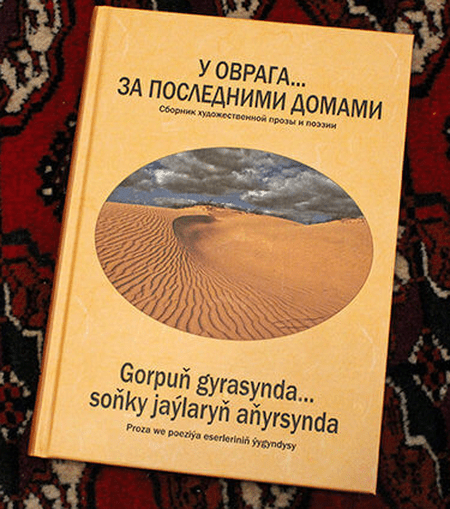 The anthology 'He Is Quietly Weeping in the Desert'

You co-led a project to assemble an anthology of contemporary Turkmenistan writers, He Is Quietly Weeping in the Desert. Its a major literary victory considering that Turkmen writing seems suppressed by the government. Could you discuss your work on the anthology? Who are some of these writers and how did this project come together? What kind of challenges does a contemporary Turkmen writer face today?
Only books under the authorship of presidents are published in Turkmenistan. At first it was Niyazov; now its Berdymukhamedov. who somehow managed to write seven books in only six months while still tending to his duties as president… Of course, let presidents write if they want and can, but both Niyazov and Berdymukhamedov have ensured a complete readership by forbidding the publication of other Turkmen writers and poets. So this idea of helping Turkmen writers has been developing for many years, but of course, it would be difficult to implement. A lot of writers could and would get in trouble if they were discovered. So to protect them, all of the authors included are published pseudonymously. But it was a success and now we the knowledge and experience of how to do something like this again, and I hope that we do. I want to give special credit to my colleague Ak Velsaparm, who was a great help in obtaining and preparing the materials for this books. There were others too on the inside where were vital to making this project happen. But for security reasons, I cannot name them.

Along with your activism campaigns, are you currently working on any more literary projects or any further translations from Marjorie Farquharson?
Unfortunately, Marjorie passed away about a year ago. She was a wonderful person and a master of her craft, and so respected as a human rights worker that the Guardian wrote her an obituary. I consider my clandestine promotion of Turkmen literature as part of the activism I do with the Turkmen Initiative for Human Rights and “Chronicles of Turkmenistan.” We try not only to bring attention to the absence of freedom of speech and freedom of expression in Turkmenistan, but also to provide a literary refuge for Turkmen writers and poets. The Turkmen literary anthology I worked on was the first major step as it was the first collection of its kind in the history of independent Turkmenistan. And while on a recent trip to New York, I met with the organization Words Without Borders. They are interested in our work, and I am we can develop a fruitful cooperation. Of course, we will continue to seek opportunities to introduce and popularize Turkmen literature in the rest of the world. It made me happy that Culture Trip was among the publication to take up this cause. Thanks a lot for it.