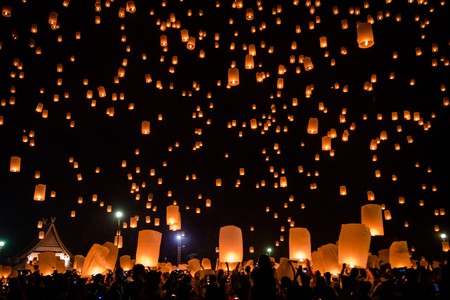 You’ve likely seen the photos of thousands of paper lanterns drift into the full moon sky – come and see for yourself one of the most awe-inspiring festivals on the planet! We’ve put together a handy guide for you to experience the magic of Yee Peng festival in the heart of Chiang Mai.

What is Yee Peng lantern festival?

Yee Peng (or sometimes also written as Yi Peng) is a festival unique to northern Thailand which is celebrated on the full moon of the 12th month of the Thai lunar calendar (usually in November). The “Festival of Lights” was adapted from Brahmin origins and has close ties with the ancient Lanna Kingdom. Yee Peng traditionally was celebrated as a stand-alone event to mark the end of the monsoon season and the beginning of the cool season, however, nowadays it is celebrated in tandem with Loy Krathong. Although other towns and cities in northern Thailand celebrate Yee Peng, Chiang Mai is the best place to experience this truly magical festival. 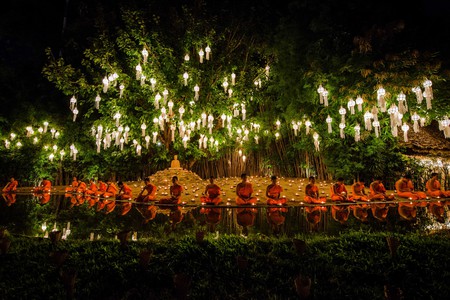 All around Chiang Mai you will see thousands of lanterns (khom loy) float up into the sky, candles lining the little sois (lanes), special parades and krathong (floating flower offerings) floating on the Ping River. Usually, a huge lantern release event takes place at Maejo University about a week before Yee Peng. During the actual Yee Peng festival Three Kings Monument, Thapae Gate, the Old Town moat area and the Ping River are the main locations where celebrations take place. If you prefer not to be part of the hustle and bustle at Thapae Gate or at the Ping River escape the crowds and head to a rooftop bar like Oasis or take a tranquil stroll down the candlelit lanes. Temples and local houses decorate their entrances with flowers and coconut leaves and the act of making or donating khom loy and krathong is significant in Buddhist culture as it represents moving away from darkness and into the light. 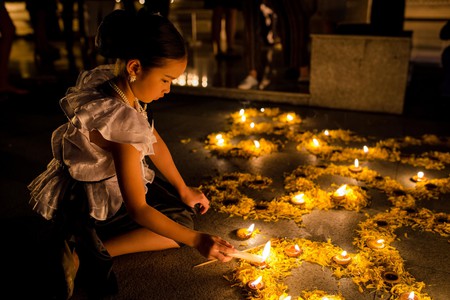 Tips for launching your khom loy and krathong

There is no need to buy lanterns in advance, there will be plenty of vendors selling them on the street during the festival.

The larger lanterns are easier to “launch”. You should not pay more than 50 – 100 baht per lantern.

Be careful not to tear the lantern, the paper is very thin.

Some people opt for writing a wish or a message on the lantern, lantern sellers will often have markers on them which you can use.

Do dig your fingers into the wax circle coil to rough it up. This will make the wax coil easier to light.

Hold the lantern with the coil at the bottom and carefully hold the lantern taut between a group of people. Launching a lantern on your own is fairly difficult. If you are travelling on your own, this is a great way to make new friends.

Don’t forget to make a wish before you release the lantern.

Wait until there is a suitable amount of resistance before you let the lantern go.

Krathongs are sold close to the Ping River and by the moat.

Thai people often put a small monetary donation on the Krathong but this is not a requirement.

Light the incense, make a wish and release the krathong on its journey! 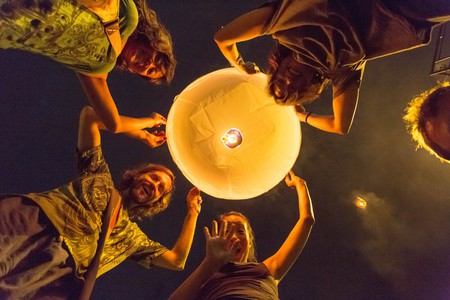 Friends releasing a lantern | © Stefan Magdalinski/Flickr
Give us feedback