Why You Shouldn't Whistle When Walking in Thailand 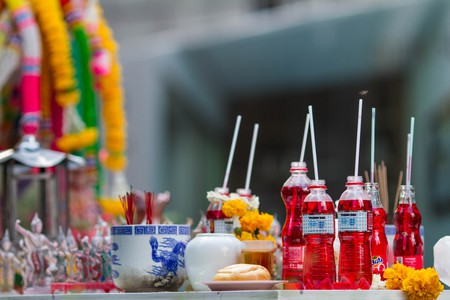 An offering to the spirits | © Johan Fantenberg/Flickr

In the West, whistling is seen as something you do when you’re bored, nothing more than something to do to pass the time or entertain yourself well all else fails. In Thailand however, it’s quite different – whistling at night is said to call the spirits or ghosts. You might not think this is a big deal, but ghosts and spirits are extremely prevalent in Thai culture. Here’s a little more about them and other superstitions that the Thai people hold to be true.

Recently you might have seen a trailer for a horror movie called Ghost House doing the rounds on social media. Whilst the ghost in question in the movie doesn’t exist in Thai culture, ghost – or spirit– houses are everywhere, and tourists walk past plenty of them everyday without knowing what they are.

Spirit houses come in many shapes, sizes and materials, but their intention is always the same. It’s a place assembled inside or next to your home for wayward spirits to rest. Daily offerings of food are made to the spirit and in return the spirit is pacified and will offer good blessings to the homeowner (which is much more preferable to a haunting). Food offered to the spirit house ranges from a humble offering of rice to candy, with strawberry Fanta proving a popular offering. It’s a tradition that’s passed down from generation to generation, steeped in Buddhist culture, that Thais don’t seem to want to forget anytime soon.

As well as generic spirits in the home, there are some more infamous ghosts that plenty of Thais fear. There are dozens of ghosts in Thai culture, but perhaps Krasue is the most feared. Resembling little more than a head, a trachea and floating viscera, Krasue is a gluttonous ghost who hunts during the night for her prey, be it people or animals. Thais tend not to hang their washing out at night because the Krasue will rudely wipe her bloody mouth upon them, and family members will often bury the placenta of a newborn deep in the ground so that Krasue will not eat it. This ghost is also prevalent in Malay, Cambodian and Lao culture.

Another widely-feared ghost is Mae Nak. Dying in childbirth whilst her husband was away fighting in a war, he returns and fails to notice she’s a ghost until he spots her stretching out her arm to pick up a lime. Horrified, he flees – first, hiding behind a bush that Thai ghosts are scared of and then to a holy temple. Mae Nak meanwhile terrorises her village until an exorcist confines her to a jar, which is thrown into a river. The jar is one day opened by two curious fishermen, forcing the well known Thai Buddhist monk Somdet Phra Phutthachan to catch and confine the spirit to his waistband. Many believe the waistband is now safe in the hands of the Thai royal family. Definitely a reason not to whistle on the way to the shops. 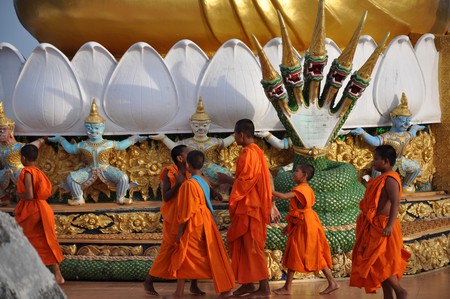 Monks at a temple | © Krabiman/Flickr

The Pret is another famous ghost, and one that’s described in various religions such as Buddhism, Hinduism and Taoism. Tall and skinny, it has an insatiable hunger yet a tiny mouth, making eating nearly impossible. Prets are spirits of those who struck or fought with their parents, so if you’re a doting son or daughter you have little to worry about.

Funny though it may seem to an outsider, Thais take these ghosts seriously. Police have been called to investigate ghostly goings on, and monks are routinely called to bless and purify a property. Ghosts aren’t the only things Thais believe though – they have a superstition for nearly everything.

If you’re looking for a haircut on your travels, you’d be hard pressed to find a salon open on a Wednesday as it’s seen to be an unlucky day for a haircut, and pulling your crops on a Thursday? Forget about it. You might also have noticed Thai people wearing amulets and with the famous sak yant tattoos. These aren’t a fashion accessory; they’re thought to bring people good luck and, in some cases, special powers. There are also several phallus shrines that you can visit in Thailand, as doing so is said to increase fertility. 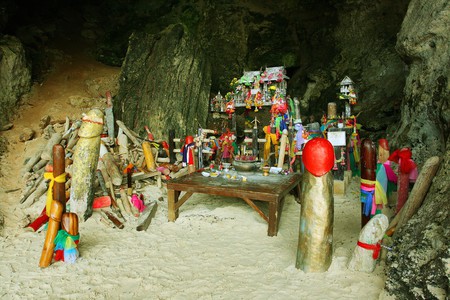