Where To Eat Insects in Thailand 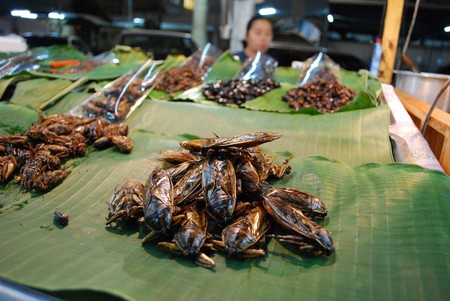 When you think of Thai cuisine, what comes to mind? Is it spicy, fragrant curry? Or rich, aromatic soup? Whatever it is, there’s probably little chance you’re thinking of creepy crawlies. That’s right – eating insects in Thailand is common among the locals. While many may find the thought a little off-putting, you may be surprised to learn that some of them taste pretty darn good. Curious? We thought so – find out where to binge on bugs in Thailand. 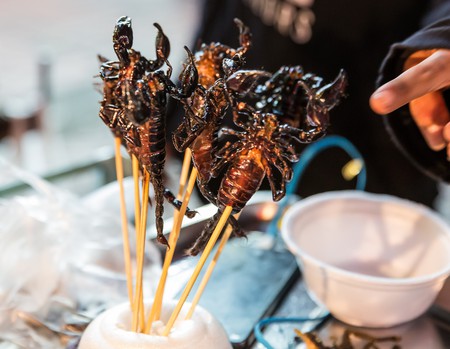 Khaosan Road is often the first port of call for travellers who arrive in Bangkok. It’s long been a backpacker haven – a place for wanderers to meet, eat, drink and be merry thanks to its cheap accommodation options, food and drink prices and infamous nightlife. It’s also the first place that many visitors to Thailand will find bugs for sale, ranging from common crickets to the more exotic scorpions and tarantulas. While the latter two can be harder to stomach – and not exactly popular with Thais anyway – fried crickets are enjoyed by many, thanks to their satisfying crunch and surprisingly moreish nature. 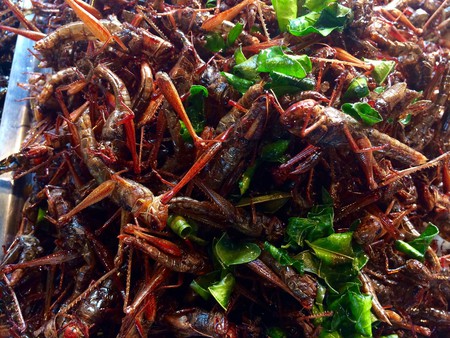 Thailand’s colourful Rot Fai market is a sprawling market in Thailand, where one can buy a range of souvenirs, clothes and accessories in a distinctly vintage setting. Aside from the shopping and the tasty Thai food on offer, there are also places selling insects to eat. Served in small trays, they’re great snacks to nibble as you’re meandering through the market stalls and hunting for bargains. Crickets and grasshoppers tend to be more palatable, though there are giant water bugs to try for those who are feeling a little more adventurous. 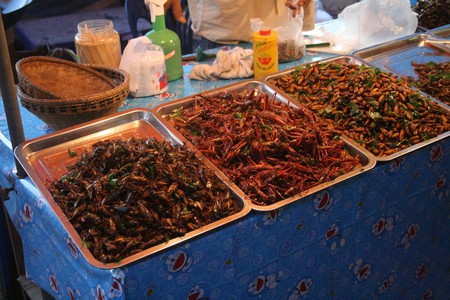 From the ogling foreigners to the lewd shows, there’s always something at Soi Patpong to put you off your dinner – though their insects for sale shouldn’t be one of them. Appetisingly laid out on display on a banana leaf, there are plenty of bugs for you to sample, from the thick and juicy palm worms to the smaller, crunchy fried ants. The smaller insects, fried in oil, are little more than a slightly pleasant crispy taste. Though the larger ones have a tendency to burst in the mouth. But don’t worry, you won’t be the first foreigner to throw up in Patpong, and you won’t be the last. 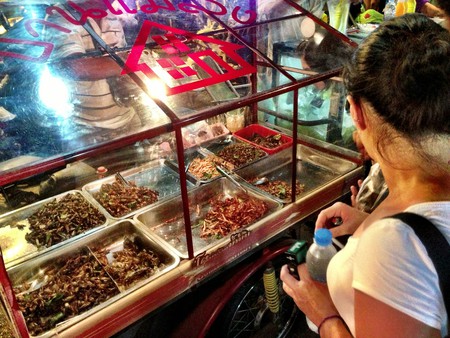 Located near the large slum of Khlong Toey, Khlong Toey market is another place in Bangkok where it’s possible to gorge on bugs. While for many foreigners bugs may be something to eat as a joke, for a lot of Thais they’re snacks they eat out of love – or a food source that some eat out of necessity. The backdrop of the nearby slum drives home that point. Insects are cheap and great sources of protein. Maybe once they become the latest dietary fad then the stigma will fade in the West. 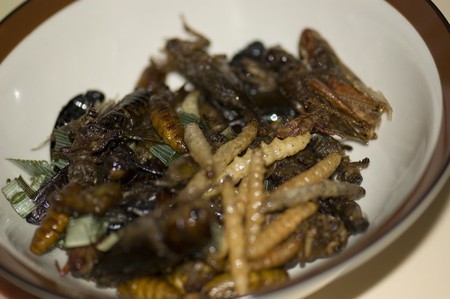 Bangkok’s Chinatown is a bustling district and a great place to sample a wide variety of insects. Yaowarat Road is where the action is centred, and bug sellers can be found in various spots all around this location. With a wide selection to choose from and low prices, you can go wild and try a bit of everything – worms, larvae, water bugs, grasshoppers and spiders can all be found here, fried and seasoned for that extra bit of flavour. Chinatown is a culinary hotspot with plenty of delicious dishes to try, so don’t fill up on bugs – think of them as starters instead.

Insects in the Backyard

Had enough of deep fried insects? Then you need to head to Insects in the Backyard, an intriguing restaurant in Bangkok which utilises bugs in its high-class menu, with dishes such as crab and giant water beetle ravioli with turmeric saffron sauce and tiramisu made with cricket powder. It’s certainly different, but has earned a good reputation for its high quality cuisine and pushing of the boundaries of what’s acceptable to eat. After all, as they point out, insects do feature in the diets of over two billion people – perhaps it’s those in the West who are the unusual ones. 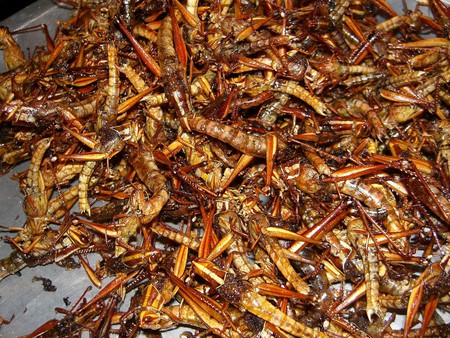 Insects aren’t just a Bangkok thing – they’re enjoyed all over the country. Up in the northern highlands, Chiang Mai’s night bazaar has a bug stall or two for you to feast on – perfect recovery food for all those scenic hikes. The usual suspects can be found – crickets and worms, not to mention cicadas and whirligig beetles – among a whole host of other delicious food choices and shops. Bring a toothpick though because yes, having a leg stuck between your teeth does happen, and it you need to be prepared for it – it’s not a good look.

Thailand’s largest island, Phuket offers plenty of chances to eat bugs of all shapes and sizes during your stay – from tiny ant eggs to giant water bugs. Locals and travellers alike can be found enjoying these tasty treats, which are more often than not pretty cheap. Tourist hotspot Bangla Road is a great place to find stalls peddling insects, as is the night market and the stalls around Saphan Hin monument. So if you’re heading to Phuket, don’t despair! You’re bound to find insects wherever you are – just hopefully not in your hotel room. 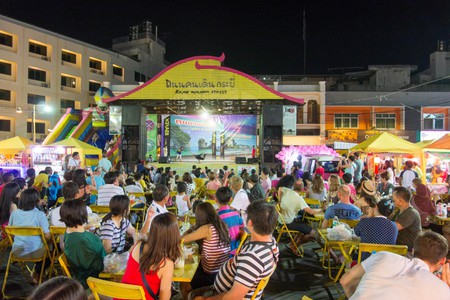 Grab some bugs and enjoy the show | © Ken Wang/Fl

The south of Thailand is known for its fiery hot curries and gorgeous beaches, but its insects are pretty good, too. Krabi Town’s sprawling walking street market has cold beers, live music, delicious Thai food and more bugs than an episode of Kitchen Nightmares – only these ones are meant to be eaten. Deep fried and lightly seasoned, they’re great with a beer and their extreme crunchiness makes them great bar snacks.