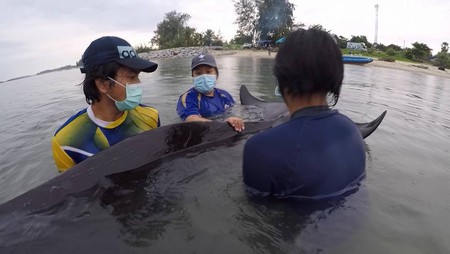 Watchara Sakornwinmon, a veterinarian at the Marine and Coastal Resources Research and Development Center in Thailand, was one of the first responders to the scene.

“He was thin, lethargic, and couldn’t swim by himself,” Watchara said. “The pod may have left him behind or chased him out of the pod because they must protect the group from disease.” 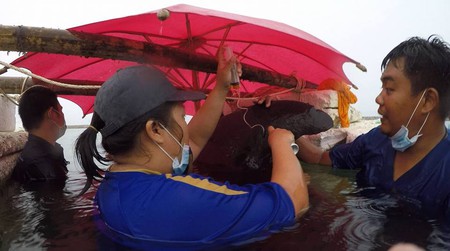 Tests including a physical examination, blood sample and blow sample showed dehydration, bacterial infection in lung and systemic infection in the whale | © Thailand Department of Marine and Coastal Resources

A representative from the Department of Marine and Coastal Resources (DMCR) added that the whale’s stomach contents—some 80 plastic bags—jeopardized the whale’s ability to hunt for its food or ingest any nutritional content, likely linked to a reduced instinct to feed because of its full stomach.

The whale even struggled to maintain its buoyancy in the water, so the rescue team launched a set of buoys to keep it afloat and protected it from the sun with a canopy of umbrellas. From there, five rigourous days of treatment by an expert group of specialized veterinarians ensued, tending to issues like dehydration, a bacterial infection in the lungs, and systemic infection.

During the rescue attempt the whale vomited up five plastic bags before dying, according to the DMCR. The subsequent necropsy revealed an astonishing 17 pounds of plastic rubbish lodged in the animal’s stomach. 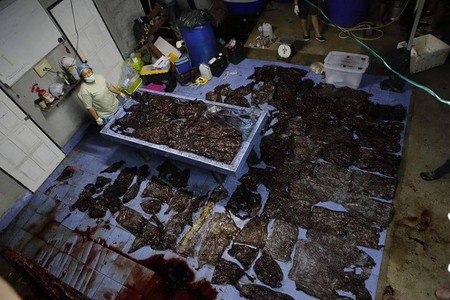 Watchara said it is difficult to identify the source of the plastic waste, but her team was able to tell that along with Thai pollution, some of the contents in the whale’s stomach were from Malaysia and even Vietnam, hundreds of kilometers away.

“Thailand is close to the number one spot for plastic pollution in the world,” said Spencer Arnold, a marine biologist and conservationist for the New Heaven Reef Conservation Program. “The volume of waste pumping into the oceans in this part of the world is staggering, and there is no one contributor – locals and tourists alike are part of the problem.”

Around the world about eight million metric tons—or eight billion pounds—of plastic waste enter the oceans annually, which experts equate to a garbage truck dumping a load of plastic into the seas every 30-45 seconds of every day. The Thai government reported in 2017 that the country produced two million tons of plastic waste alone. 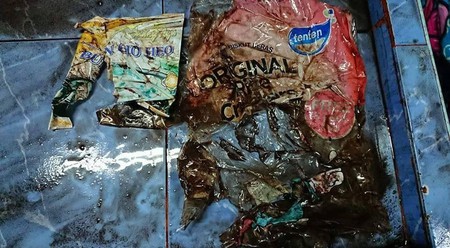 Thailand generates some of the most plastic waste in the world, some 2 million tons in 2017 alone | © Thailand Department of Marine and Coastal Resources

Arnold said that the rising levels of plastic pollution are being made more evident and quantified by initiatives like the 5 Gyres Project, which maps plastic pollution across the globe with a focus on the unseen microplastic problem. Microplastics are too small to be easily seen by the human eye, but their growing abundance across the planet’s waters greatly threaten the health of the marine animals that inevitably wind up ingesting them. Watchara echoed the magnitude of this problem. She believes that the pilot whale found in Songkhla was likely already very ill from pollution before the mass of plastic bags it consumed ultimately led to death.

But this is far from an isolated incident. In the past five years of her work alone, Watchara said that this is the fourth pilot whale stranding she’s experienced, along with a number of sea turtle deaths directly linked to plastic consumption. Sea turtles often eat jellyfish, while pilot whales love to feast on squid – each prey that can easily be confused with floating plastic waste.

Julian Engel, a conservationist with the Germany-based NGO Stop Finning, echoed the global nature of the threat marine animals face, and that the problem is much larger than meets the eye.

“Plastic pollution as a threat to marine animals is not a new issue,” Engel said. “A few years ago, a number of sperm whales were found stranded on the North Sea [coastline of Germany] with plastic netting, plastic car engine covers, and more in their stomachs. But it’s important to address the non-solid pollution as well,” Engel added, referring to microplastics and pollution that disrupts the balance across ecosystems. 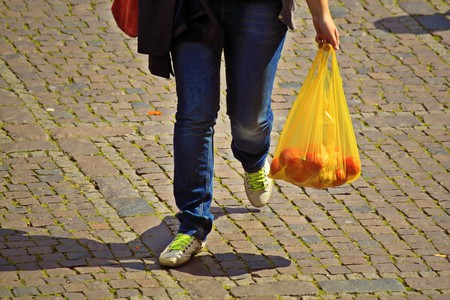 The Environmental Quality Promotion Department reported that on average, one person in Bangkok uses 8.7 plastic bags every day. The lifespan for one plastic bag is measured at about 20 minutes before it is discarded. | © Pxhere

The situation in Songkhla served as a wake-up call to drive forward local initiatives as well. Watchara said the DMCR is working on a holistic project for the country focused on marine debris research, particularly concerned with microplastic and marine debris on beaches and in river mouths. Creating an accurate picture of the breadth and scale of the problem in Thailand can help her department urge policymakers and leaders to develop solutions that help mitigate the problem, such as levying a tax on plastic shopping bags – a move the government announced last month it was considering. The Environmental Quality Promotion Department reported that on average, one person in Bangkok uses 8.7 plastic bags every day, and of all marine litter recorded in 2015 for the country, 13% were plastic bags, while food packaging and straws accounted for 8 and 10%, respectively.

Ultimately, she believes that behavioral changes in our everyday lives to reduce our use of single-use plastic is the best way forward.

“Plastic pollution is a world problem that needs the help [and attention] of everyone,” Watchara said. “I hope this case can motivate people to reduce plastic use and inspire more people to worry about [our impact] on the environment.”

For tips for how to travel more sustainably through Thailand, check out our guide here.