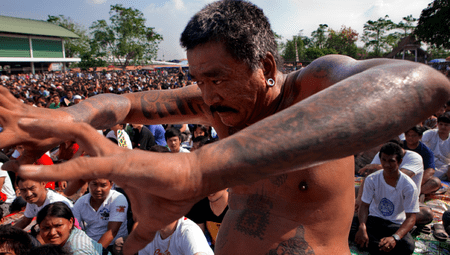 Every year, the first weekend of March witnesses a worldwide exodus to Thailand as committed disciples converge to perform a spiritual ritual consisting of them either getting a tattoo or re-empowering the ones they have. They are carefully and meticulously done by the monks of the Wat Bang Phra monastery, 50 kilometers west of Bangkok, and are said to protect and safeguard the people to which they belong. 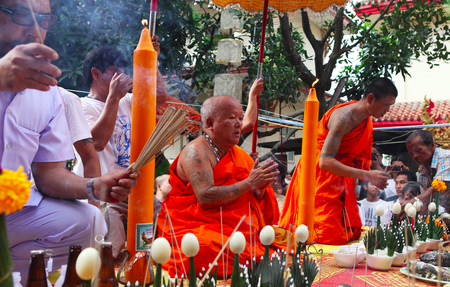 Former meditation monk Luang Pho Poen was known to many for the strength of his incantations and his mastery of protective tattoos, the sacred Sak Yant tattoos. While studying with the great Luang Pu Him Inthasoto, he became an ordained monk at just 25. Luang Pho Poen continued the Sak Yant master’s tradition long after his death in 2002, but never tattooed himself.

It came to light that along the Myanmar-Thai border, villagers were being regularly attacked and even killed by tigers or other wild animals. Luang Pho Poen responded to this, offering protective incantations in the form of tattoos known as Sak Yant. From that point on, it is said that anyone with a tattoo was never attacked by a wild animal ever again. Word quickly spread of his powers and as he returned to Wat Bang Phra monastery, his reputation soared. Hundreds began to travel from all over to see him and get one of the blessed tattoos.

Nowadays, the temple is still known for the monks giving daily tattoos, but once a year a festival is also held not only to give tattoos, but also to re-empower existing tattoos and to collectively celebrate the power held in them. 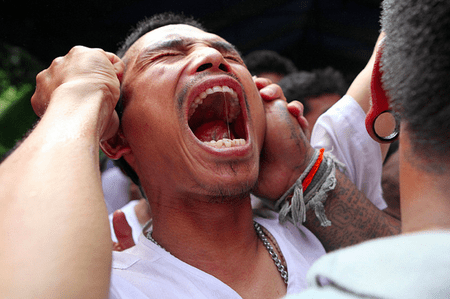 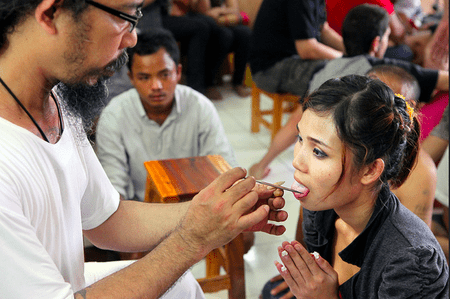 On the eve of the festival, thousands of people make their pilgrimage to the Wat Bang Phra temple, before undergoing a very specific series of ritual events. Upon entering the temple, the person wishing to be tattooed will purchase flowers and incense as an offering to Buddha and will also provide a separate offering to the monks. They then remove their shoes and sit down in a line, waiting to be blessed by the monk once the offering has been accepted. This is officially authorization for a Sak Yant. 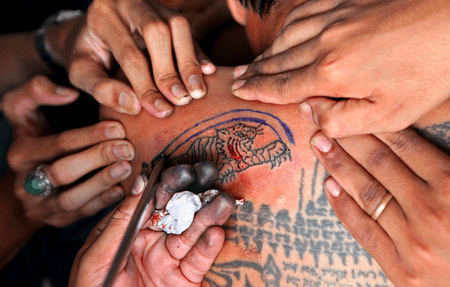 The tattoos themselves consist of a number of designs. Upon entering the temple, hopeful tattooees are faced with a large banner showing all tattoos available. Specific requests can be solicited, but mostly a tattoo will be chosen from the banner and carried out by the monk at the top of the back. As those wishing to be inked wait in line, their job is to assist the monk in holding still the person in front while they are worked on. To do this, the monk uses a long thin needle about 4 millimeters wide and 18 inches long, with the tip split into two so that it pierces two holes on the skin at a time. The monks begin by applying the template ink, then continue to trace the pattern, dipping the needle into oil every 30 seconds. The oil used on men is usually a mix of palm oil, Chinese charcoal ink and sometimes snake venom as well. For women, transparent ink is often used and the monk will wear a glove in order to avoid touching the female body. 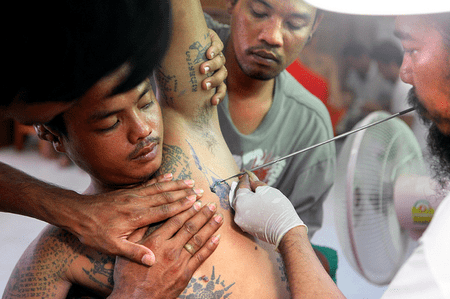 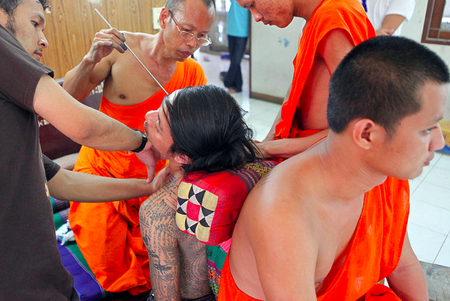 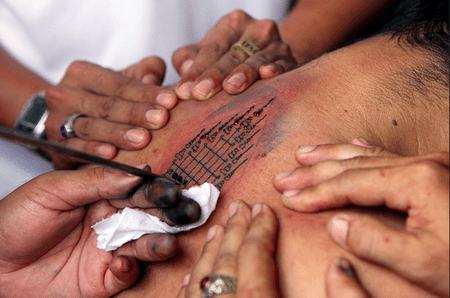 The event itself is of deep spiritual significance shared by few others in the Buddhist calendar, bringing together more than 10,000 worshipers to the monastery. The festival begins with the monks standing in front of the temple before crowds of impatient worshipers. They sing their katas, a type of blessing, to activate the tattoos and re-empower them. Many freshly tattooed women and men become possessed by the spirits of the tattoos in various waves. Many fall into a trance and begin to act and dance similar movements to those of the animal in the tattoo. They begin to yell, run and jump at invisible enemies; those with tiger tattoos embody the tiger and its behaviour, and those with crocodiles and snakes lay low and move on the ground. Some people are prone to unloading the copious amounts of energy with a long scream or wail. Then, if the tattoos have gathered enough power, the possessed tattooees slowly wake up from their trance and resume participation in the festival as others follow suit. 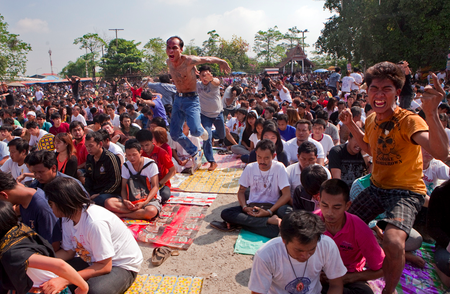 © Igor Bilic
Give us feedback