This American Moved Across the World For Muay Thai 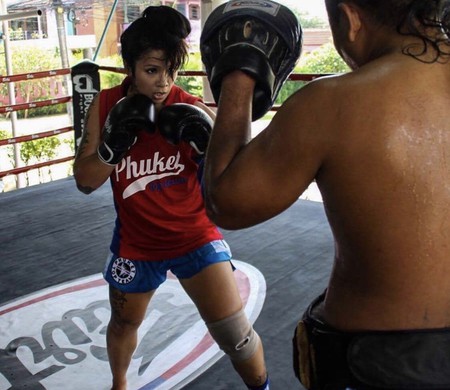 In 2015, KC Carlos packed up her life in Texas and moved it across the world to Thailand to further her career in Muay Thai, the nation’s historic combat sport.

KC Carlos was tired of the back and forth. The cramped flights. The luggage. The jet lag. The airplane food.

So she decided to pick up and move across the world, all in the name of sport.

Growing up in Houston, Carlos practiced taekwondo for 12 years. But a few years ago, she started looking for a new challenge. A friend of hers was training in Muay Thai and had been to Thailand, the birthplace of the combat sport and after he told Carlos about the sport’s history and his visits overseas, she was hooked. Immediately she began transitioning into the discipline.

“I love the beauty and technicality of it,” Carlos says. “Everyday I’m learning something new of this amazing sport and it helps me grow as a fighter.” 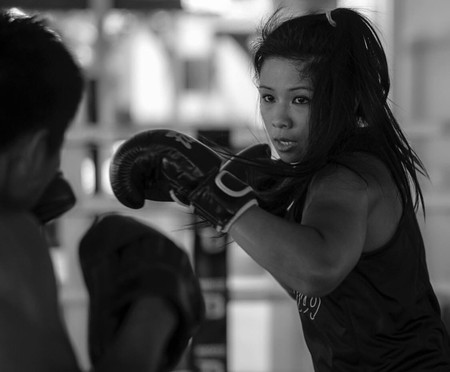 Muay Thai is deeply rooted in Thai history and culture. While the exact origins of the sport are unknown—the Burmese army allegedly burned all records of its roots in 1767—its development as a form of protection and survival is apparent. Some say Muay Thai was created by Thai military members as a means of protection against neighboring countries, while others say it was developed to help the Thai army occupy and defend lands as they moved south from China.

Regardless, Muay Thai, referred to as “The Art of Eight Limbs”, is a full-body fight. Participants use their hands as swords, shins as shields and armor, and elbows and knees as a hammer or ax.

Carlos began her Muay Thai training in the United States and frequently made the 20-plus-hour trek to Thailand to further her skill set. Tired of the flights and the inefficient process, she decided that, in order to become the best fighter she could be, she had to devote all of her time and efforts to Muay Thai. That meant packing up her life and relocating to Thailand.

So in 2015 she did just that, and moved to Phuket. The transition wasn’t too hard, Carlos says, as she was already familiar with Southeast Asia—more specifically, the Philippines, where her family is from. 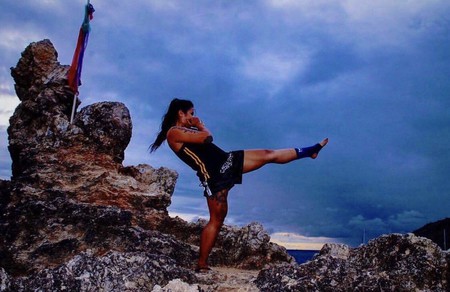 The first Thai gym she joined was recommended by a friend. While finding a training facility was pretty easy, finding a trainer proved a little more difficult. Every day for a week Carlos had a different trainer holding pads for her until she found the right chemistry with one. Carlos, 31, has since switched gyms, now training out of Phuket Top Team.

Carlos is fully immersed in her Muay Thai training. Sessions are twice a day, six days a week from Monday through Saturday. Prior to training, Carlos runs for a warm up then heads to the gym for stretching and to put on her hand wraps. The class begins with a round of shadowboxing, then four rounds of pad and bag work. Four rounds of Muay Thai sparring follow. Toward the end of class, fighters do leg kicks, knee the bag 200 times, and do 200 sit ups. The session concludes with fighters bowing to their trainers and shaking hands with all the trainers and students in a display of appreciation and respect. 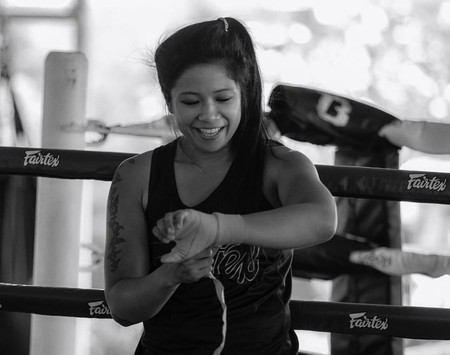 Carlos aims to have one fight per month, but that depends on her health and injuries. With a professional fighting record of 11-7-0, she was 2016 Chalong Boxing Stadium Champion and was also a contender for the World Muay Thai Council 60kg belt in 2017.

“Within this sport there are so many different techniques,” Carlos says. “There isn’t a person that knows it all. Everyone is learning something new and everyone will always be a student.

“I want to learn as much as I can, use it in the ring, and go as far as I can while I still can.”