The 10 Best Thai Films of All Time 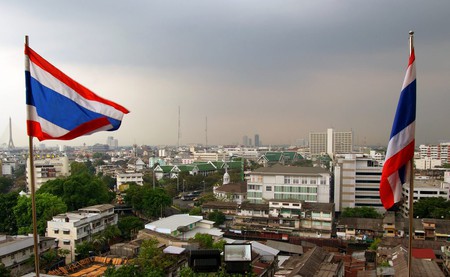 Movie fanatics, cinephiles, film buffs: come one, come all. Read on as Culture Trip are here with a comprehensive guide to what might just be the best Thai films of all-time.

Muay Thai is the national sport of Thailand, and the most popular, with fights held in rings around the country every day. It is also known as the ‘The Art of Eight Limbs’, and fighters simply transform their different parts, such as elbows and knees, to act as lethal weapons during a fight.

Ong Bak: Muay Thai Warrior, a 2003 martial arts film, was arguably the first movie to properly display what one of these fights actually looked like. It even made waves in cinemas across the United States where the film was known as Ong-Back: The Thai Warrior.

Thai film director Prachya Pinkaew is behind the action-packed martial arts film, and he even went on to direct a second and third prequel, as the original movie was such a hit. The film was released in countries around the world, including Mexico, Canada, Italy, India, and Australia. It was exciting and packed with action, but the main star of the show was Tony Jaa, who featured in all three films.

As the winner of the Jury Prize at the 2004 Cannes Film Festival, it may come as no surprise that Tropical Malady is one of the best Thai films of all-time. Seasoned and award-winning director Apichatpong Weerasethakul has a number of movies and short films under his belt, but none are seemingly as noteworthy as this romantic yet thrilling Thai folk film.

Though it was seemingly extremely popular, Tropical Malady also seemed to induce mixed reviews. During the screening of the film at the 2004 Cannes, some audience members actually upped and left before the end.

Shutter is one film movie fanatics will not want to view solo. The 2004 thriller follows a young Thai couple in the aftermath of a car accident. After a night out drinking with friends, Jane (Natthaweeranuch Thongmee) runs over a woman with her car and leaves her for dead. Following the accident, Jane and her boyfriend Tun (Ananda Everingham) find themselves wrapped up in a strange series of events, one of them being a number of bizarre images appearing in Tun’s developed photographs.

The mystery movie was extremely popular after it was released in the early 2000s. It was recognized and awarded in a number of small international film festivals, as well as at the Bangkok International Film Festival where it was nominated for the 2005 Golden Kinnaree Award for best film.

Thai director Prachya Pinkaew could not get enough of the action and came out with another martial arts film that is one of the best movies in all of Thailand, Chocolate. The 2008 movie even goes as far as to show his original success, Ong Bak, in one of the scenes of the film. The plot follows a young girl named Zen (JeeJa Yanin Vismistananda) as she becomes a skilled fighter by watching Ong Bak as well as imitating fighters at the Muay Thai gym adjacent her home.

When her mother is diagnosed with cancer, Zen takes it upon herself to collect her mother’s debts in order to pay for her treatment, and she quickly finds that her acquired Muay Thai skills come in handy as her first encounter turns violent. The cast and crew extensively promoted the film before its premiere and the movie received positive reviews from most critics.

Uncle Boonmee Who Can Recall His Past Lives

Thai director Apichatpong Weerasethakul, who was also behind Tropical Malady, was somehow able to top that amazing film with yet another bold and intense movie – Uncle Boonmee Who Can Recall His Past Lives. It was the first Thai film to win the distinguished Palme d’Or at the 2010 Cannes Film Festival and was shot using film instead of being done digitally.

The film was originally intended to be a biography on an abbot Weerasethakul met at a temple in his hometown. The abbot’s name was Bonmee and he claimed to know everything about his past lives, as the information came to him while he was meditating. Unfortunately, Bonmee died before Weerasethakul could make his film a reality, so he instead made the mystical and dramatic film that won over almost every audience that viewed it.

At the 5th Annual Asian Film Awards, the movie won for Best Film, and it was selected as the Thai entry for the 83rd Academy Awards as the Best Foreign Language Film.