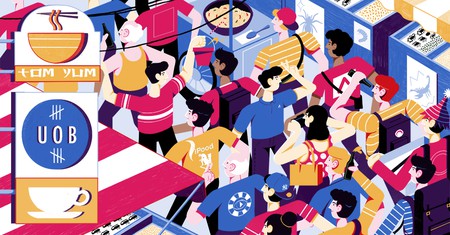 For decades, Khao San Road has been the go-to destination for backpackers and budget travellers arriving in Bangkok for the first time. And despite many changes over the years, these days it still has plenty going for it. Here’s your must-read guide to Khao San Road.

What do many travellers to Thailand have in common? They have been to Khao San Road. This party-heavy strip of bars, restaurants, nightclubs, shops and guest houses in old-town Bangkok is the very definition of Thailand’s backpacker scene. The area has seen enormous changes over recent years, but it remains the place new arrivals make a beeline for the second their plane touches down.

The history of Khao San Road

Plenty of overseas visitors confuse the ‘khao’ in Khao San for ‘koh’ – the Thai word for ‘island’. In fact, ‘khao’ is Thai for ‘rice’, and ‘khao san’ as a whole means ‘milled rice’. That’s a name the short road earned itself in the days before mass tourism, when it served as a local market street specialising in Thailand’s staple crop.

Around the late 1980s, the road eventually took over as Bangkok’s foremost backpacker enclave from previous favourite Soi Ngam Dupli. That street, in the Sathorn central business district, is now mostly sleepy and exudes an abandoned vibe with few remaining signs of its more raucous past (among them is the legendary dive bar Wong’s). Since Khao San’s rise to fame, it has made cameos in films like Leonardo DiCaprio’s The Beach, only serving to further cement its now worldwide reputation. 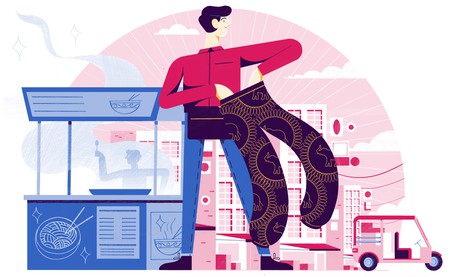 On top of all that, few who have experienced a night or more on Khao San can think back on it without fondly remembering the roaming northern Thai hill-tribe women selling flamboyantly coloured, pointy hats and wooden frogs that croak on demand. The same goes for the tailors shouting “suit for you, sir?” at anyone who will listen, as they tout garments of distinctly questionable quality. Plenty will also recall horrific tales of being scammed by the bad apples of Thailand’s taxi and tuk-tuk drivers and travel agents – a reminder that, while truly awful incidents are unlikely, visitors should exercise a reasonable degree of caution.

Just about all of a traveller’s basic needs are catered to here, to the point that it would be perfectly possible (albeit not hugely memorable or advisable) to spend a week or two in Bangkok and never leave Khao San Road. In fact, plenty of naïve first-timers will admit to believing, on some sub-conscious level, that Khao San and its immediate vicinity are all there is to Bangkok. That’s a million miles from the reality, of course, but it goes to show that there is an enormously developed tourism scene here that continues to draw and provide comfort for newbies.

Of course, the downside to Khao San’s level of tourist-appeasing Westernisation is that, at times, being here gives the feeling that you could in fact be just about anywhere in the world. There has also been a marked effort to make Khao San Road more upmarket in recent years, pushing up prices and relative levels of luxury at everything from guest houses to restaurants – although the bargain spots are still around.

Controversy has also increasingly broken out between local vendors and Bangkok’s city government regarding the presence of street food and other hawkers in the area. Authorities want to cut down on the number of street vendors, push them into designated areas and limit the times at which they can operate. However, they have faced fierce opposition, and for now the authorities seem to have relented.

The march of development, gentrification and what some would call sterilisation certainly hasn’t ceased in today’s Bangkok. Nevertheless, it seems unlikely the Khao San Road so many know and love (and which quite a few also hate, it has to be said) will change all that much in the years to come.

What to do on Khao San Road

When you’re on Khao San Road, the order of the day is eating, drinking, shopping, and partying – rinse and repeat. Day and night, stalls line the street selling everything from elephant pants and Chang beer singlets to hammocks ready to string up when you finally reach the beach. There are also numerous simple spas offering Thai massages, manicures and pedicures. Hair-braiders set up along the street, and second-hand bookstores provide for beach reads on the islands.

A word to the wise: Khao San can be great, but it’s even better when used as intended – as little more than a backpacker-friendly bridge to the rest of Bangkok. It would be a shame to spend your whole time here, when even the district immediately around it is filled with some of Bangkok’s most celebrated tourist attractions – the likes of the Grand Palace, Wat Pho, Wat Arun, and the Golden Mount.

Democracy Monument and the impressive, brand new Bangkok City Library are also close by, and it’s only a short hop to neighbouring Chinatown. The lack of access to Bangkok’s most popular public transport systems, like the BTS Skytrain and the MRT subway, represents a significant drawback to staying in the Khao San Road area – although new subway stations are due to open here soon and will change all that. Even now, it’s just a short walk to Phra Athit pier for river boats to Saphan Taksin, or Phan Fa pier for the canal boat to Pratunam, where Skytrain connections keep downtown attractions within reach. 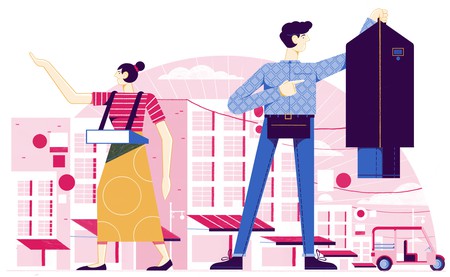 Where to eat on Khao San Road

Street food geared towards tourists – pad thai, mango sticky rice, spring rolls, meat skewers, pancakes, fresh coconuts and fruit shakes – will be seen everywhere on Khao San Road. But it’s tempered to suit the perceived tastes and spice tolerance of tourists, to the point that it’s often deathly bland. And despite Khao San’s reputation for cheap living, food here is usually horrendously overpriced compared to local Thai eateries (even more so at the bricks-and-mortar restaurants along Khao San). The same goes for gimmicky edible insects (which you’ll be charged for taking a photo of, even if you don’t try one) – yes, Thai people eat these, but not at 50 Thai baht (£1.20) for a single scorpion!

Where to drink on Khao San Road

Khao San Road’s drinking scene is unparalleled. With the right group of friends – or provided you’re open to meeting new people at the bar, which is easily done – you’re almost guaranteed a good time here. Just keep in mind that the booze served in particular at Khao San’s street bars are often unforgivably strong, meaning it will hit you before you know it.

For the vodka bucket experience for which Khao San Road is now famous worldwide, head to Golf Bar – adorned with the proud slogan that ‘we do not check ID’ – or one of the many almost identical outfits that surround it. These serve huge, cheap-as-chips, sandcastle-style buckets filled to the brim with inexpensive spirits and mixers plus a handful of straws to share. You’re sure to regret them the next day, but they are an inimitable part of the true Khao San experience.

The One Khaosan, formerly the iconic Silk Bar, is a trendy, open-air setup with tiered seating that affords good people-watching opportunities. Along the road, Superflow Beach Club is one of the new breed, with a tropical island look that includes real sand for you to feel between your toes – a taste of what’s to come later in your journey, perhaps. And one of Khao San’s main nightclubs – The Club, Brick Bar, or Lava – is where most people’s nights end in the wee hours.

For a slightly more subdued and less in-your-face-touristy experience, Khao San’s neighbouring streets Soi Rambuttri and (especially) Phra Athit – themselves slowly starting to feel like part of the ever-expanding Khao San monster – are also well worth a look. 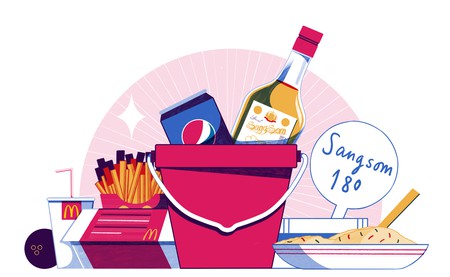 How to get to Khao San Road

Many tired and jet-lagged travellers flying into Bangkok for the first time opt to take a taxi from Suvarnabhumi or Don Muang airport straight to Khao San Road. At airport taxi stands or elsewhere, if you get an honest driver who switches on the meter as required by law, the figure on the meter should come to around 300 to 400 baht (£7.05-£9.40). If the driver refuses to use the meter, get out and take another cab that will – it’s that simple.

On top of this, you’ll need to pay tolls of between 50 and 120 baht (£1.20-£2.85) if you take the less traffic-prone expressways, plus a surcharge of 50 baht (£1.20) if you get your taxi from the official airport stand. That amounts to approximately 570 baht (£13.40) – but remember that Bangkok’s traffic situation is notoriously unpredictable. You’ll likely end up spending less than this, but on occasion might pay a little more.

More frugal travellers can take the bus. Both airports have routes with tourists in mind, running directly to Khao San Road, while local buses are also easy enough to catch from outside Don Muang airport. From Suvarnabhumi airport you can take the Airport Rail Link to Phaya Thai, and then take a taxi or local bus to Khao San. And from Don Muang airport it’s possible to take the so-cheap-it’s-almost-free mainline train to Hualamphong terminal station, then take a taxi or bus to Khao San Road. But bear in mind that these trains run less frequently than other modes of transport, and are almost always heavily delayed when coming from far upcountry.