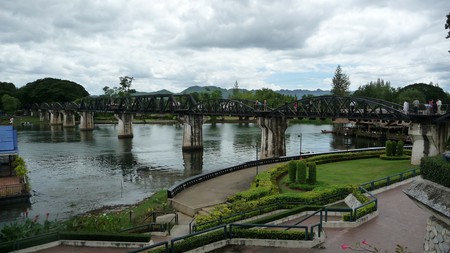 Bridge on the River Kwai | © dsavop/Pixabay

A harrowing historic event that’s steeped in notoriety, tragedy and immortalised in film, the construction of the “Death Railway” connecting Thailand with modern day Myanmar was an arduous, gruelling project that claimed thousands of lives, only to see parts of the railway removed and sold following the conclusion of the war. Created with the intention of moving men and supplies to the Burmese front, here’s the story behind this dark corner of history and its bloody railway. 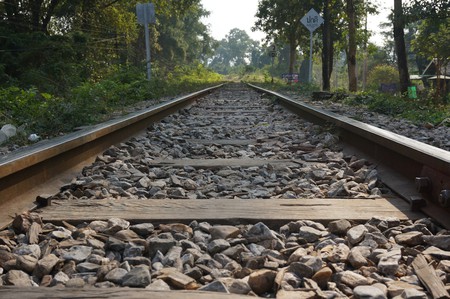 Section of the Death Railway | © Andrew and Annemarie/Flickr

It’s 1942, and the Second World War is raging around the globe. Thailand remained neutral, yet soon saw its land occupied by Axis-sided Japanese forces, leaving them no choice but to cooperate with a far more powerful empire. Thailand’s proximity to the British colony of Burma made it an ideal spot for Japanese forces to gather and prepare for offensives against the British. However, preparation is all well and good, but useless without the logistics to transport troops and supplies to battlefield. An alliance signed between Thailand and Japan allowed Japan full access to Thai infrastructure, yet with an abundance of local labourers and Allied prisoners of war (POWs), Japan sought to build infrastructure where there was none before. That’s when the Death Railway project was begun.

Construction began in September 1942 in Burma, and November 1942 in Thailand. According to the Australian government, the labourers consisted of in excess of 250,000 South East Asians and 60,000 POWs from various Allied countries. The work itself was back-breaking; often without the necessary tools, the workers slaved under a hot sun and were brutalised by the unempathetic Japanese and Korean overseers. Many succumbed to diseases, which were easily spread given they were forced to live in squalor and without even basic hygiene, and starvation was a real threat due to the physical nature of the work and with food in short supply, with as little as 600 calories the daily intake of the workers. The workers were maltreated, malnourished and exhausted, and as a result it’s thought that in excess of 100,000 people died during the construction of the railway – showing precisely why it came to be known as the Death Railway. It’s thought that one worker died for each wooden sleeper that was laid for the track.

The famous Bridge and Hellfire Pass 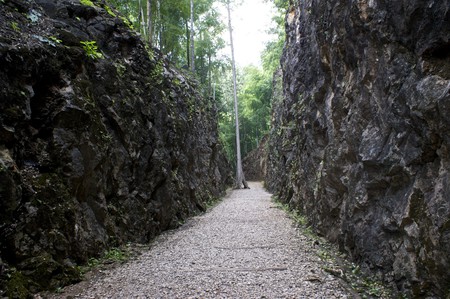 Section of the Hellfire Pass, carved through stone | © Matt Brittaine/Flickr

The most well-known section of the Thailand-Burma railway was the bridge constructed over the river Kwai. Initially written about in a book, it became an incredibly successful film that won several awards, including the Academy Award for Best Picture. However, it was later criticised for not going far enough in its pursuit to portray the terrible working conditions. A more than impressive undertaking, the bridge was bombed several times by the Allies, who put it out of commission. Yet whilst the bridge may be the most well-known section of the railway, it wasn’t the most arduous – the Hellfire Pass has that distinction.

Hellfire Pass was the largest rock-cutting on the line, with the workers having to cut into rock in remote hills without proper tools for the job. Workers toiled for as many as 18 hours a day and long into the night; the sight of them doing so in torchlight inspired the name of this section of the railway. Allied POWs, as well as several other South East Asians who were lured by the false promise of jobs, not only succumbed to exhaustion, starvation, dysentery and cholera, but were often beaten to death by the Japanese guards too. Whilst there was a large number of lives lost building this section, it isn’t in use today.

In spite of all this, the project was actually finished ahead of schedule – though at an unimaginable cost. Survivors have spoken about the things that got them through, such as workers playing instruments to raise spirits, group singing and humour. Whilst hard to quantify, such camaraderie and resilience in the face of extreme adversity surely remains a factor of the completion of the project and of keeping the workers alive. 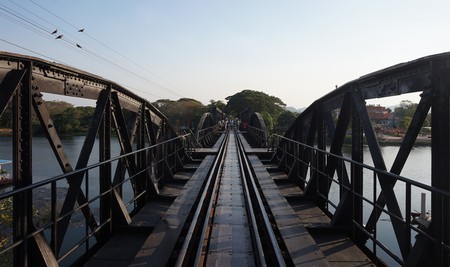 A bridge over the river in Kanchanaburi | © Mittmac/Pixabay

Following the end of the war, the railway needed extensive repairs in order to remain serviceable for the Royal Thai Railway. Today, around 130km of the line is in use. The sheer loss of life was shocking; 29% of the British, 31% of the Australian, 23% of the American and 19% of all the Dutch POWs used in construction didn’t survive – which is horrendous enough – yet a staggering 90% of the Asiatic labourers didn’t survive. As a result, 111 Japanese officials were tried for war crimes after the conclusion of the war, with 32 of them executed.

This isn’t a fairy tale – there’s no happy ending. Tens of thousands of labourers died, all for a railway that wouldn’t survive for much longer after the war was over. To this day, there’s a distinct lack of recognition for those who took part in and died during the construction of the railway, and it’s thought that mass graves are still out there.

There are memorials and museums in Kanchanaburi for visitors who want to either learn more about the railway or wish to pay their respects.