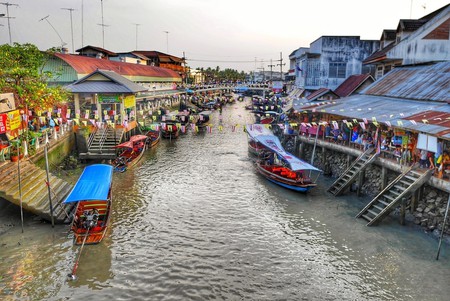 Water lovers will have plenty to be pleased about in Thailand, with picturesque rivers criss-crossing the nation to complement the beautiful beaches and and lakes.

With Culture Trip, you can now experience the best of Thailand with a small group of like-minded travellers on our specially curated 10-day adventure to Northern Thailand or Southern Thailand.

Thailand is famous for its beaches and mountains, but the country also boasts many scenic rivers and canals with charming waterside communities and a variety of attractions and activities. Here are some of the quaintest riverside towns and villages where you can chill out, enjoy the views, and unwind in peaceful settings.

Close to the Burmese border and surrounded by mountains and countryside, Kanchanaburi is a scenic town along the banks of the River Kwai. The town has a long history and many wartime attractions, such as the striking Bridge Across the River Kwai and the Death Railway, soldier cemeteries, and museums that tell visitors more about the area’s past. Waterfalls, caves, and hiking trails are within easy reach of the town. Many accommodations are located right along the waterside, and there are even several floating raft-house resorts if you want to fall asleep while gently bobbing on the water. 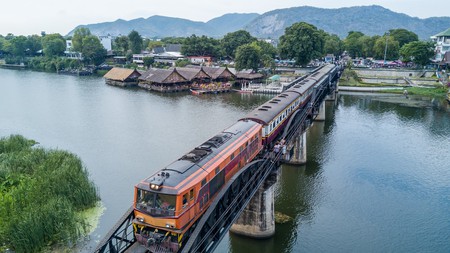 Northern Thailand’s remote riverside town of Nan is located in the lush and fertile Northern Rivers Valley, with ripe farming land and wild mountains creating picturesque views in the distance. An important settlement during the Lanna Kingdom, Nan also has rich historic attractions. Handsome wooden houses line the river and a major sightseeing hotspot is the glorious King of Nan’s Teak House, which dates back to the 1860s and houses a number of splendid antiques. If you visit towards the end of the rainy season you can watch competitive and colourful boat races along the river. 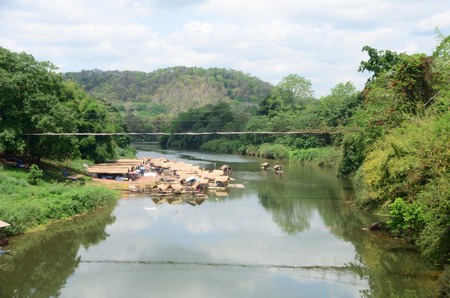 Situated in Northeast Thailand, within the province of Loei, Chiang Khan is a popular getaway spot for Thai people looking for a laidback vibe, cool temperatures, and pretty vistas. The compact town is easy to explore by foot; stroll alongside the Mekong River and soak up the soothing atmosphere. At weekends Chaikhong Street becomes an evening walking street, with plenty of street eats to tempt you and an array of trinkets and handicrafts to take home as cool local souvenirs. In the dry season, when the water levels are low, you can even enjoy the novelty of dining in temporary restaurants right on the river bed at Gaeng Kut Kuu. 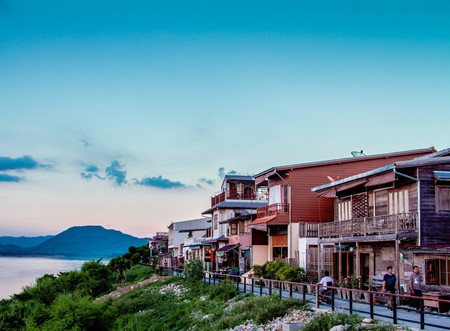 Close to the border with Laos and next to the mighty Mekong River, Nong Khai is another quaint riverside town in Isan (Northeast Thailand). The Friendship Bridge spans the river, connecting with neighbouring Laos, and the town is home to one of Thailand’s quirkiest attractions: Sala Keoku. Created according to one man’s whimsical visions, Sala Keoku is a rather surreal statue park where you can see alternate interpretations of both Buddhist and Hindu ideologies. Other highlights include the diverse and frenetic Tha Sadet Market and an aquarium. In the dry season you can see the remains of the Sunken Chedi, an ancient structure that became submerged in the river, eventually collapsing into the cloudy waters. Step out onto the high Sky Walk to soak up the views. 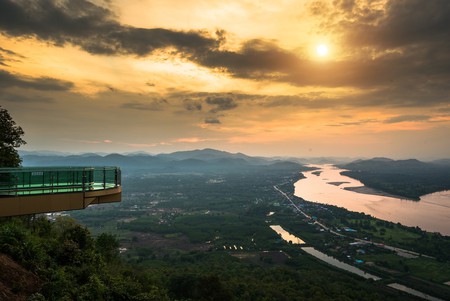 Pak Nam Pho is a little-visited town in Nakhon Sawan Province. It sits at the point where the Ping River and Nan River meet, merging to create one of Thailand’s most significant waterways: the Chao Phraya River. The source of the Chao Phraya is a whirling mixture of two colours, with greens and tones of muddy rust mingling before your eyes. Boat rides are available along the rivers and great views are afforded from the dam. The town has several interesting temples and shrine, and visitors can see legacies from the area’s past importance as a Danish teak-trading town. 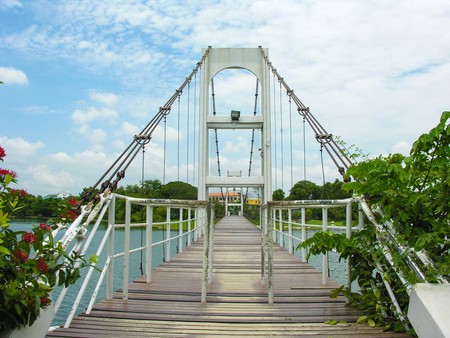 A remote yet popular town in Northern Thailand’s Mae Hong Son, Pai has a reputation as a chilled hippie hangout. Along the route of one of Thailand’s greatest motor-biking circuits, the Mae Hong Son Loop, the gentle Pai River flows through the enticingly relaxed town. Attracting a diverse crowd that includes backpackers, spiritual enlightenment seekers, new-age travellers, and package tour groups, the vibe is certainly eclectic. Natural attractions in the locale include Pai Canyon, Mo Paeng Waterfall, and Huai Nam Dang National Park, while culture fans can get their fill at places like Chedi Phra That Mae Yen, Wat Klang, and the Chinese Village. There are activities to suit varying tastes too, ranging from cooking classes and yoga sessions to circus instruction and adventure pursuits. 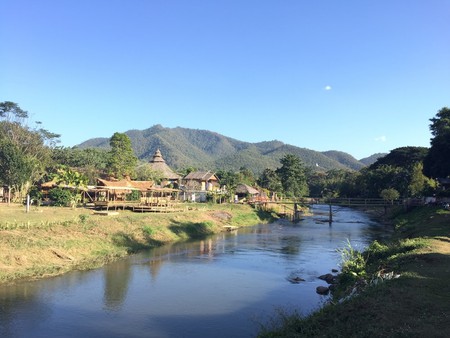 Song Khon is a village in Isan’s Ubon Ratchathani Province. It is home to one of Thailand’s most fascinating and scenic natural sights: Sam Phan Bok. With a name that translates as Three-Thousand Holes, Sam Phan Bok is a large section of the river bed that has eroded in an unusual manner, resulting in many holes and indentations in diverse shapes and sizes. Look out for heart-shaped holes and one known locally as the Mickey Mouse hole. Nicknamed the Grand Canyon of Thailand, there are many high craggy rock walls, unusual rock formations, and lava-like rocky fields.

Take a boat trip along the Khong River after walking across the unusual landscape to see local fishermen casting their nets and navigating the waters in small colourful vessels. You can only experience the full marvel of Sam Phan Bok in the dry season, from January to April, when the water levels have significantly dropped. Pro tip: while there are a handful of amenities in Song Khon, the nearby Khong Jiam offers a much more convenient base from which to explore. 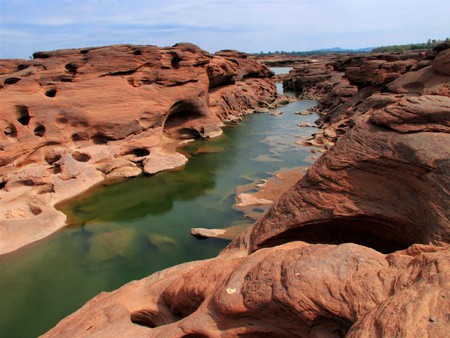 A delightful town in Chiang Rai Province, Chiang Saen was an important settlement during the Lanna Kingdom. The town is surrounded on three sides by high walls, with the fourth boundary provided by the gushing waters of the Mekong River. Abandoned for many years, Chaing Saen now attracts those looking for a tranquil ambience and sense of history. Attractions include ancient temples and ruins, Chiang Saen National Museum, the riverside walkway, and Chiang Saen Lake. There are numerous street vendors alongside the river for a tasty local dinner, or you can soak up the views from a low-key terrace restaurant. 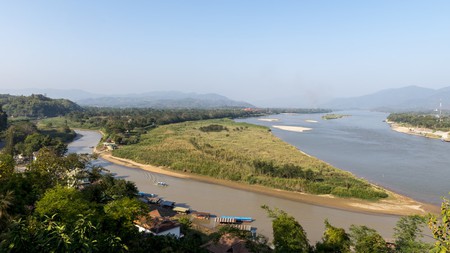 One of Thailand’s most inaccessible towns, Umphang can only be reached by one road: the twisting and turning Sky Highway, or Death Road. Close to the Burmese border and surrounded almost entirely by dense jungle, Umphang is a nature and adventure lover’s dream. Stunning views can be enjoyed in every direction and activities include visiting remote Karen villages, whitewater rafting, caving, trekking, kayaking, and soaking in hot springs. There are many waterfalls to admire, including the enormous Tee Lor Su, which is the biggest in the country. 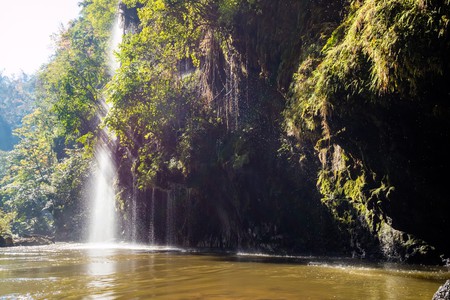 Amphawa, in Samut Songkhram Province, is famous for its large and lively weekend floating market. Unlike the nearby Damnoen Saduak, Amphawa Market operates in the evenings. It is more popular with Thais, meaning foreign visitors can enjoy more of a traditional and authentic experience than at some of the larger and more well-known floating markets in Thailand. The market is especially known for its wide assortment of food, including dishes that can be difficult to find elsewhere in the country. Visitors can take a boat ride along the river, pausing to haggle with floating vendors and to admire riverside temples. During the rainy season the trees flicker and shine from the glow of fireflies and the insects create enchanting illuminations in front of your eyes to add to the charm. 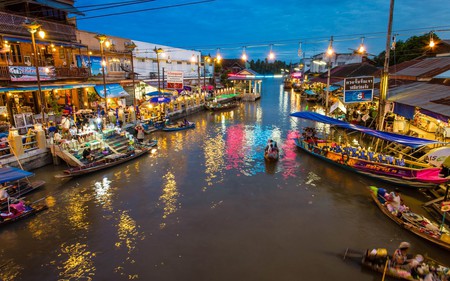