palm trees | © Courtesy of andre16/Pixabay
Thailand is not just a destination for bucket-craving backpackers or lovey-dovey newlyweds: the country has something to offer all types of travelers, including those who love being outdoors. It is home to some of the most stunning natural parks in the world, many of them found in the southern region. Here are the most beautiful national parks you need to visit in Southern Thailand.

Park
Khao Sok | © Courtesy of Kent Wang/Flickr
Sprawling, green islands intertwined with royal blue and turquoise bays is what makes up the majority of Khao Sok National Park. The marine sanctuary looks almost too good to be true, with almost 460 square miles of pristine, tropical landscaping for visitors to enjoy. National parks do not get much more pristine than this one, and Khao Sok is apparently home to some of the oldest evergreen rainforest in the entire world. It is also one of the most easily visited national parks in Southern Thailand, and sits between some of the country’s most popular tourist destinations: Krabi, Phuket, Koh Samui, and Khao Lak.
More Info
Open In Google Maps
Khlong Sok, Chang Wat Surat Thani, 84250, Thailand
+6677395154
View menu
Visit website
Visit Facebook page
Send an Email
Give us feedback

Park
Mu Ko Ang Thong National Park | © Courtesy of Sunny Lapin/Flickr
Situated in the Gulf of Thailand is the Mu Ko Ang Thong National Park. The park consists of some 42 islands in total, and the area in which it covers is mostly water. Out of the 102 kilometers the park takes up, only 18 kilometers or so are actually made up of land from the random assortment of islands found here. This is great for the resident plethora of marine life. Mu Ko Ang Thong National Park was established in 1980 and its name literally translates to “Golden Bassin,” which is quite fitting considering its stunning makeup.
More Info
Open In Google Maps
ตำบล อ่างทอง สุราษฎร์ธานี, 84280, Thailand
+66815382939
View menu
Visit website
Visit Facebook page
Send an Email
Give us feedback

Though the island of Phuket is known as the Pearl of the Andaman, Mu Ko Similan National Park is certainly in the running for being one of the most stunning finds this side of the country. Established in 1982, this national park is located some 70 kilometers from the mainland, so it is certainly one of the most difficult parks to frequent. That being said, visitors will surely be pleased having made the trek once laying eyes upon the park, consisting of some nine or so islands. The Mu Ko Similan National Park is best known for its dive sites and the combination of vibrant and unique coral in addition to a wide array of marine life has divers traveling far and wide to explore this national park under the sea. 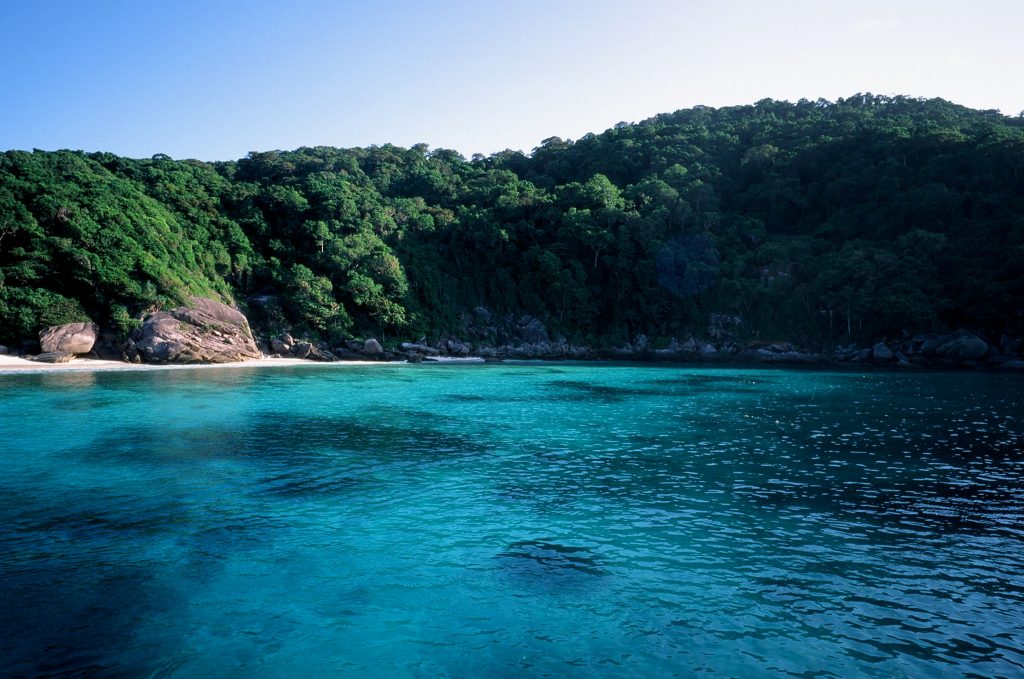 Park
James Bond Island (2007-02-649) | © Courtesy of Vyacheslav Argenberg/Flickr
The Ao Phang Nga National Park was established in 1981. The 80s seemed to be a prime time in which many of these pristine wonders were proclaimed as the national parks they are today. Made up of 40 or so islands, this national park is sure to impress even the most avid of outdoorsman. Ao Phang Nga National Park is home to some of Thailand’s most stunning of natural features, including mangrove forests, limestone cliffs, and a number of caves. Visitors can make day trips here and explore in hope of finding their own strip of private beach to enjoy the scenery.
More Info
Open In Google Maps
Ko Panyi, Chang Wat Phang-nga, 82000, Thailand
+6676481188
View menu
Visit website
Visit Facebook page
Send an Email
Give us feedback

Khao Luang National Park is one of the largest in the south, covering some 570 kilometers. The park certainly has an abundance of natural wonders, however, it is most renowned for the many waterfalls found here. It is also home to the tallest mountain in the south of Thailand, which is what the park was actually named after. Khao Luang Mountain, one of the park’s most noteworthy features, stands at a whopping 1,835 meters above sea level. In addition to natural features, visitors can expect to see vibrant orchids, exotic birds, some different types of monkeys, and more. There are a few accommodation options found at the national park, should visitors want to stay for longer than a day. 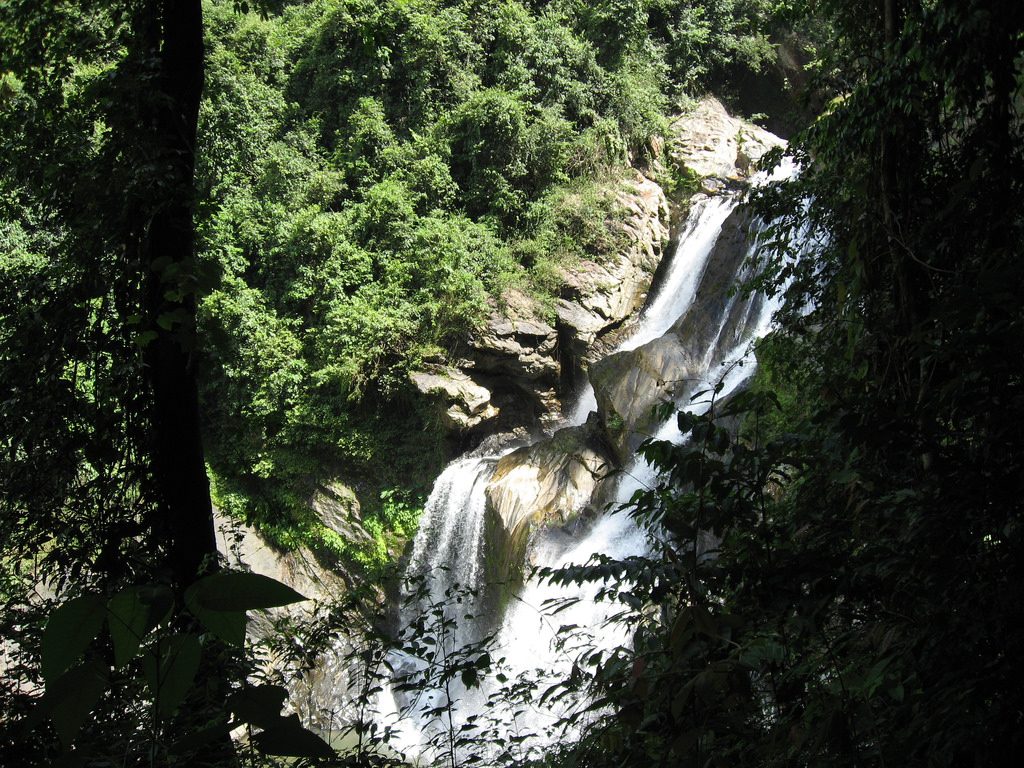 Park
Koh Tarutao (2007-03-547) | © Courtesy of Vyacheslav Argenberg/Flickr
Found in the Andaman Sea along with the Mu Ko Similan National Park is Tarutao National Marine Park. Spanning over some 1,490 kilometers, this park is made up of around 50 different islands, each one seemingly more stunning than the last. The park is so remarkable it was almost dubbed as a UNESCO World Heritage Site in the early 1990s. Unfortunately, it was rejected, however, it was earlier declared in 1982 as an ASEAN Heritage Parks and Reserves, which helps protects the abundance of marine and wildlife that reside in the pristine water of this national park. Visitors can make day trips to either dive or snorkel, and those wanting to spend a bit more time can opt for one of the accommodation options or actually camp out at the Tarutao National Marine Park. There is a ฿200 entrance fee into the park.
More Info
Open In Google Maps
325 Walking Street, Ko Tarutao, Chang Wat Satun, 91000, Thailand
+6674783597
View menu
Visit website
Visit Facebook page
Send an Email
Give us feedback

Park
Trimeresurus cardamomensis (in situ) - Khao Chamao - Khao Wong National Park | © Courtesy of Rushen/Flickr
Do not let its size fool you: this small yet wondrous park is one of the most stunning of national parks in all of Thailand. Khao Chamao-Khao Wong National Park only covers some 84 square kilometers, but every inch of it is teeming with wonders including incredible waterfalls, remarkable caves, and an abundance of wildlife. The national park makes it easy for visitors to explore, as there are many hiking trails meandering its entirety. Some of the top destinations found at the Khao Chamao-Khao Wong National Park include the Khao Chamao Waterfall, Klong Pla Kang Waterfall, and the Khao Wang Caves.
More Info
Open In Google Maps
Rayong, 21110, Thailand
+6638996202
View menu
Visit website
Visit Facebook page
Send an Email
Give us feedback
Give us feedback