The Most Awe-Inspiring Temples in Chiang Rai, Thailand 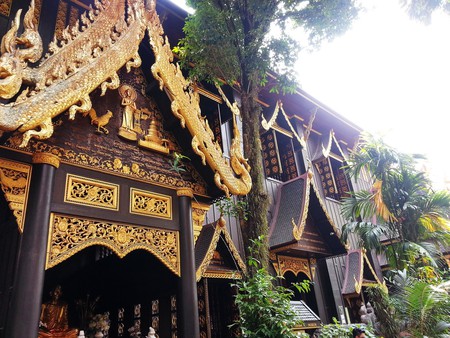 Chiang Rai is home to some of the most beautiful and fascinating temples (wats) in Thailand. Come prepared to be awe-struck as you take a walk down history lane and discover some of the most sacred gems of Northern Thailand. We’ve put together a helpful list of the city’s most impressive temples for you to check out.

A highlight of any visit to Chiang Rai is a trip to the quirky Wat Rong Khun, otherwise known as the White Temple. This unique temple juxtaposes tradition with contemporary art and was created by the famed Chaloemchai Khositphiphat. There is plenty to explore at this famous temple which also doubles as an art exhibition. 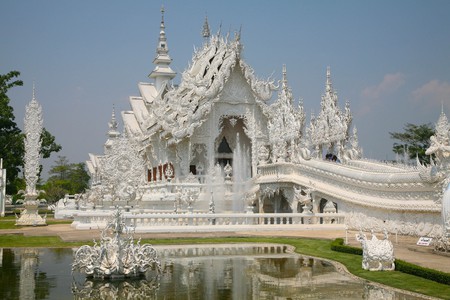 Wat Phra Kaew is one of Chiang Rai’s oldest and most revered temples. It is believed that in 1434 the pagoda was broken by a lightning bolt which revealed the sacred Emerald Buddha hidden inside, which is now located in a temple with the same name in the Royal Palace grounds in Bangkok. An Emerald Buddha replica made of green jade is on display in Wat Phra Kaew in Chiang Rai. Also of particular interest is the 700-year-old bronze statue of Phra Chao Lan Thong and the two-story museum in the temple grounds.

Doi Chom Thong is a long-standing and important spiritual site. It is believed that local spirits arrived there before Buddhism came to the area and now co-exist. The central pagoda in the center of the temple is a mixture of Lanna and Bhu-Kam (ancient Burma). This temple is known for the famed elephant that had wandered off when Paw Kuhn Meng Rai was following it and arrived on the lone hill of Doi Chom Thong on the river bank.

Wat Phra Sing is one of the oldest temples in Chiang Rai. The temple’s main attractions are the ubosot, the viharn, the chapel containing a footprint of the Buddha and the area where the monks reside. This is a stunning temple with lots of details to discover. The grounds also including a Pali language school and large entrance gates with Naga snakes.
Wat Phra Sing, 2415 Ruangnakron Rd, Tambon Wiang, Amphoe Mueang, Chiang Rai, +66 053 711 735 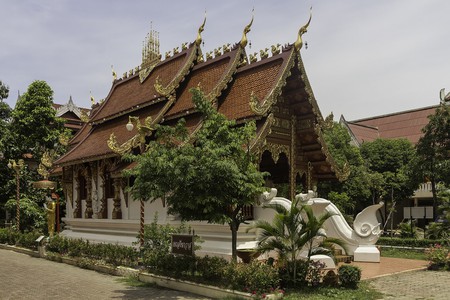 Wat Chedi Luang, which was constructed in 1290 by King Saen Phu, is located in Chiang Saen in Chiang Rai province. Located next to the National Museum, the temple is in traditional Chiang Saen style. Of particular interest are the 18-meter tall (60 feet) pagoda and the ruins of the large prayer hall. It is also worth spending some time exploring the nearby National Museum.

Wat Phra That Chom Kitti is located on a small hill and is iconic for its crooked pagoda. This temple is actually comprised of two temples; Wat Phrathat Chom Kitti and Wat Chom Chaeng which has an old pagoda and a modern Chiang Saen style ubosot. The ubosot has a large Buddha image which sits under a fabricated Bodhi tree.