The ancient ruins of Phra Prang Sam Yot are a popular tourist destination in Thailand, but for one day a year they are also the location of an incredible banquet thrown in honour of the monkey population that lives here. 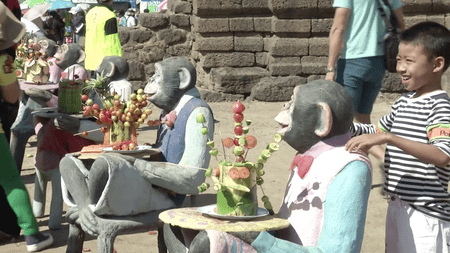 The temple in Lopburi hosts the Monkey Buffet Festival on the last Sunday of every November, and the guests can enjoy mountains of fruit and vegetables at their leisure. The diners are actually long-tailed macaques that are native to the region, with locals believing that they bring good luck and fortune to the area. They are certainly popular with tourists, who flock to the temple and pose with the creatures.

The Monkey Buffet Festival commences with an opening ceremony where human performers dress up in costumes as the macaques themselves watch on. The food is then revealed from beneath large cloths, and the guests of honour dive in. The buffet usually consists of delicacies such as pineapple, watermelon and the notoriously smelly (but delightfully tasty) durian fruit.

Monkeys are revered not just for the good fortunes they bring in from tourists, but also because of the religious beliefs of locals. The tale of Monkey King Hanuman and his army winning a famous battle against a demon lord has been passed down for generations. 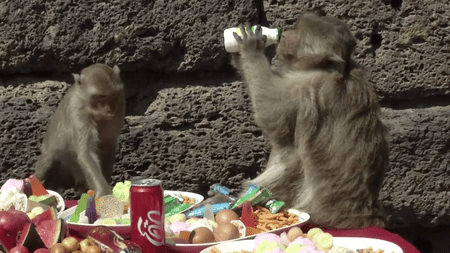 The historic temple is believed to have been constructed in the 11th century by the Khmer rulers of the period. The former Buddhist place of worship is now better known by travellers as Monkey Temple.

Lopburi is located about 150km (93mi) from Bangkok and can be easily reached by car, bus or train from the capital city. As with all interactions with wild animals, safety is advised, and it’s not unheard of for the monkeys to run away with purses, wallets, items of clothing and other valuables!